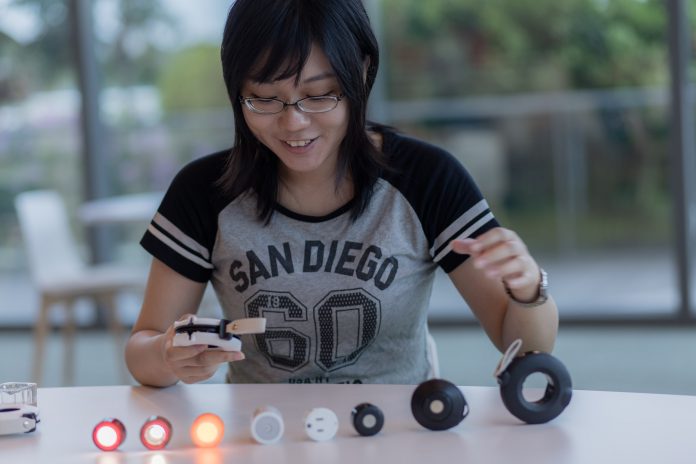 “What really matters, and what doesn’t, becomes clear and simple when I imagine myself on my death bed,” quips Asa Lin (Engineering Systems and Design (ESD), Junior) when asked why she decided to found MOGICS. After a trying time in Junior College, Asa decided to take a gap year to explore herself and “do something in [her] own way”. Little did she figure that in this one year, she would be putting her years of travel and computer game problem solving to brilliant use.

“When I first started out, entrepreneurship wasn’t a big thing, now you hear people talk about startups all the time, but back then I didn’t even know that this is what I was doing. All I wanted was to do something that I like, to explore how to solve real problems in real life.”

Together with two colleagues, MOGICS set out to improve travel experience with simple products, launching the Bagel and other travel products on KickStarter. “We designed the MOGICS Bagel for people who have a lot of devices to charge when travelling,” explains Asa as she demonstrates how the Bagel takes the existing universal adaptor to the next level — it can convert all types of devices and charge them at the same time. MOGICS has since been featured on international media such as The New York Times, CNET Japan and the Netherlands Newspaper. Designing stunning products doesn’t come without its challenges. MOGICS faced major legal problems when another creator blatantly attempted to claim their designs. “We didn’t have enough budget to hire a patent agent or lawyer to help us deal with this,” Asa recalls. Eager to patent their designs nonetheless, Asa would work late into the early morning sifting through scores of legal documents, and even drafted her own patent claims. Calls with the United States Patent and Trademark Office (USPTO) occurred frequently, and Asa would often excuse herself from class if a call came in during lessons. “When class ended, my full time work has just begun. That’s how it has been for the first few terms,” she explains.

“I learned that SUTD is a new school with a small community, which really hooked my interest. I thought about the freedom and energy of a young school, the genuineness of connection in a smaller community of people — then I applied online, SUTD was my first choice.”

Despite having a successful product line, Asa still felt the need to return to school as a ‘blank piece of paper’ to continue learning before diving deeper into the start-up business. She first discovered SUTD from some promotional banners on a MRT train. Attracted by the school’s logo and copywriting, she opted for SUTD because of what she had heard about its community. Asa does not regret her choice, having met other like-minded, risk-taking and norm-flipping people in the school. Since matriculating, Asa’s entrepreneurial finesse has not gone unnoticed. Some professors and students became her customers after seeing her products, which proved a sublime experience for Asa. Last year, she was approached by Professor Luo from Engineering Product Development (EPD) to speak about MOGICS during his entrepreneurship course. A firm believer of always being your ‘real self’, Asa cheekily recounts addressing a roomful of smartly dressed entrepreneurs in a t-shirt and flip flops. Asa is also a member of Fifth Row Club, SUTD Start-Up, where she serves as a mentor to fellow students who need a bouncing board for their ideas. She particularly enjoys giving advice on marketing and selling products.

As a shy individual, Asa is grateful to have course mates who accommodate her quietness. “They still welcome and support me whenever I climb out from under my rock,” she shares. With MOGICS on hold, Asa is currently working on her next project called Elves Factory, an app-based service which her cohort mates from 14F07 and friends helped to name. After graduating from SUTD, the MasterCard scholar plans to stay in the USA for a few years to continue developing MOGICS, and also intends to attend graduate school there.

“As a person, I like being under everyone’s radar and do my own stuff in peace; fame or prestige is not my cup of tea. As a designer, I would like MOGICS to be recognised and used by people across the world.”