We had a chat with Teo Yi Liang, Event Director of CRUX 2018 and President of SUTD Climbers as they are deep into the planning of CRUX 2018 to find out what it means to him to be able to turn his passion into achievement.

He climbed when he was in poly. He climbed when he was in the army. No prizes for guessing what Teo Yi Liang is up to these days at SUTD. In fact, the spirited third year ESD (Engineering Systems and Design) undergraduate is currently the President of SUTD Climbers and Event Director of CRUX 2018 which runs from 4th to 5th August 2018 at Toa Payoh Swimming Complex.

We spoke to the climbing enthusiast to find out the origins of CRUX, their plans for this year, and what it’s like to be at the helm of something he loves (hint: it takes more than passion).

Climbing is his calling

Even before Yi Liang was officially enrolled in SUTD, he knew he was going to be a part of SUTD Climbers – even though he didn’t have much information about them.

“They didn’t have an Instagram account or anything. The first time I saw their climbing wall, it was through a picture shared by the SMU Climb Team when they were here (in SUTD) for a workshop,” the young leader recounts, “it was a very decent wall, and I saw a huge potential to do so much more with it.”

His goal since then was clear, “I want to build a vibrant SUTD climbing community.”

The crux of CRUX

Yi Liang joined the team at a time when his seniors were busy planning for CRUX, the club’s inaugural Deep Water Soloing event. It was also the group’s first time playing host to such a large-scale project.

CRUX was not intended to be a Deep Water Soloing activity initially. “They (the seniors) wanted to do something similar to Gravical (a SMU-led bouldering carnival),” says Yi Liang, “but OSL (Office of Student Life) challenged them to come at it from a different angle. They said, ‘Maybe you shouldn’t do something that’s similar to what everyone else is doing.’”

That’s when Ronald Yeung, event director of CRUX 2017, recalled a recent trip to Krabi where he experienced the exhilaration of Deep Water Soloing.

Deep Water Soloing, for the uninitiated, is a type of rock-climbing that involves the scaling of sea-facing cliffs with no safety ropes or harnesses. Lose grip, and the climber plummets several metres into the embrace of the waters below. It’s a variation on the sport that has seen a rapid rise in popularity amongst climbing aficionados. And Ronald is one of them.

The challenge from OSL spurred him to create a localised event for the thrilling sport. Years of planning, researching, and approvals-seeking later, CRUX was officially conceived.

Yi Liang was roped into the committee as Programmes Lead when Ronald learnt of his interest to initiate a committee with similar ambition. “I didn’t know they had this going on back then, I was just throwing ideas in a regular group meeting,” he explains, “I was really excited when Ronald shared their plans with me.”

CRUX 2017, the first ever Deep Water Soloing competition to take place in Singapore, was held at Toa Payoh Swimming Complex and featured a 6-metres high rock wall that towered magnificently over the pool below. It was undeniably the star of the show. The event concluded on a pretty positive note, with both crew and over a hundred participants thoroughly enjoying their experience with the novel activity.

Following Ronald’s graduation, the pressure is now on Yi Liang to drive this year’s event forward. Having participated last year, the budding event director is very much aware of the event’s dos and don’ts. Like a true leader, he’s taking steps to apply all of his learnings to this year’s project.

For starters, CRUX 2018 will no longer be a competition-only event. Instead, the team has planned for it to be a carnival that will not only appeal to both competitive and curious climbers, but anyone looking to have some fun by the pool.

“We will have lots of fringe activities this year,” Yi Liang relates, with palpable excitement creeping into his voice, “there will be scuba diving, slacklining, stand-up paddling, inflatable castles, and physical activities like endurance workouts organised by our new partner TMDsports.”

The event will also see two new sets of walls to facilitate its Deep Water Soloing activities – an upsized 8-metres tall tower for competitive climbers, as well as a mini 4.5-metres boulder – for those who’d love to give this unique sport a shot.

“This may just be our branding moving forward,” says Yi Liang, “there will be plenty to do and lots of fun!” Clearly, the team is all out to dominate the pool-side climbing scene.

Like last year, CRUX 2018 is jointly organised with PAYM, Sports SG and TMDsports – their new partner this year. The carnival runs from 4th to 5th August 2018 and will take place at Toa Payoh Swimming Complex. You can find out more and register at www.sutdcrux.com.

When he’s not out there fulfilling duties as a committee executive, Yi Liang is often back in the club climbing, mingling and generally ensuring that the needs of his members are duly met.

“I am very lucky to have a group of fellow ‘siao on’ (enthusiastic) people in my batch,” Yi Liang shares with a laugh, “we climb together, we create hype together and we pushed for many, many projects together.”

“Like the hangboard over there,” he continues, gesturing to a block of wooden structure behind us, “it was empty before this so we decided to populate it. Hui is the creative one so she contributed the most (chuckles). So now there’s a span board, there are pictures, photographs – basically things that reflect our climbers’ culture. It adds a lot more flavour to the team, I feel.”

Yi Liang proceeded to lead us to the team’s climbing wall – the very one that impressed him before he was even an official student. “See this board here?” he asked. It was a rectangular wooden board affixed to the wall with a wooden screw. On it, a huge QR code on the top right corner with several multi-coloured acrylic squares below. “This is our connection to the virtual world,” he laughs, “Justin fabricated this. Just scan the QR code, and you’ll see all the climb routes we’ve marked out during our trainings.”

We nodded intently, impressed. It’s a clever way of using technology – and a rather apt one too, considering the fact that we’re at SUTD. 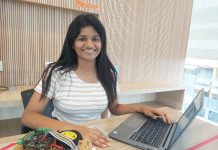 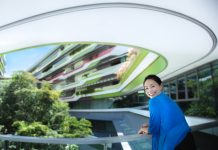 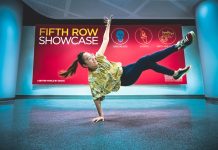 Your next tweet may just influence the design of future public...

All Set for Work