Home Exchange Design And Technology Experience Adventure : Experiencing Hang Zhou
Facebook
Twitter
Pinterest
As I first entered the first full week in Hang Zhou, I remained violently and constantly impressed by the state of cashlessness in China with the use of Alipay. We used it everywhere to the point I have no recollection how cash in 人民币 looks like. Walmart to buy your groceries? Alipay. Fancy dinner at 外婆家? Alipay. Buying street food at 河坊街？Alipay. Buying drinks at the top of 北高峰? Alipay. I could go on and on but I guess the point is made.
Besides the convenience that we get to enjoy, Hang Zhou has a multi-faceted experience to offer us which we spent the entire first week in Hang Zhou experiencing.

Cashlessness in China with just the use of a single highly integrated phone application is just a tip of the iceberg when it comes to the usage of advanced technology in China. Alipay provides a system that not only facilitates cashlessness, it is like an all-in-one app that allowed me to 外卖 my meals when I am just too lazy and 淘宝 products that are so affordable. Apart from this use of technology, China is also able to flaunt its various gadgets and devices made by local companies which we spent a few hours admiring and getting our hands on at World Industrial Design Conference(WIDC). All these exposures to advanced technology really broaden my horizons and as a student who is entering her pillar year in ESD, this exposure was kind of inspiring.

As I embarked on this exchange program to ZJU, one main question I had was how did SUTD and ZJU collaborate in the first place when one is such a young university and the other, an established one.  The answer to my question was answered when we visited 浙江大学校史馆。Both university not only place great emphasis on design and technology but are also similar in their philosophy towards higher learning. Being an established university, ZJU has produced various technology which was made known to us during the tour of ZJU Science and Tech Exhibition.

Being typical tourists, we HAD to visit 西湖，as it is a MUST SEE attraction in Hang Zhou ( listed as a World Cultural Heritage Site by UNESCO in 2011). Without saying, we the place was crowded with other tourists. We had to ditch our initial plans of cycling along the lake and walk along the lake instead. The walk was a blessing in disguise as it allowed us to explore the environment at a much slower pace. What struck me the most was the massive crowds that 西湖 experience on a regular basis. Once a place of serenity and tranquillity where city dwellers could seek respite in is now just another extension of more human traffic from the city itself. The 西湖 experience gave me another perspective towards tourism and its effects on the livelihood and environment of locals.
Taking advantage of the relatively cool weather before summer hits us with its strong rays of heat in the later part of ALP, we climbed our first peak,北高峰, which is located in the vicinity of 西湖 ( together with many other peaks which I am looking forward to climbing) 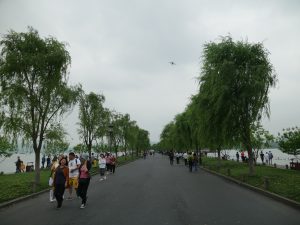 From the first meal I had in the ZJU’s canteen, I knew we are in for good food all around Hang Zhou ( or even China in general). I was not wrong. Not only was food much more affordable（11 dishes of seafood in only cost $14/ person!） here, they are unique and generally tasty.  In some cases, even the dining experiences restaurants offer are kind of interesting. At 外婆家, when we were served one of their highly recommended dishes, we were asked to “hammer the dish” while the server said a string of well wishes in Chinese ( no visual evidence because we were all taken aback). Another one is being in a 麻辣 store where ingredients are served on a conveyer belt.

I shall dedicate this portion of this post to the main highlight of the week which is Buddy day. Our buddy, whom we address as Chan, promised us in his itinerary that he will let us discover the rawness of Hang Zhou …. he did not disappoint.
For the past few days, we have been enjoying the convenience and comfort of 滴滴车s because, as Singaporeans, they were “ cheap” compared to the taxis we have in Singapore. For today, our buddy and us travelled using both the metro and public buses primarily. All I have to say about the public transport experience, especially the ones on public buses is that they were… a ride ( no pun intended ). Similar to Singapore, commuters find themselves squeezing like in a pack of sardines in these public buses and jostling through the crowds when it is their turn to alight. Something interesting about bus rides here is that almost no one uses the bell to signal that they want to alight at the next stop. Someone would just shout to the bus driver “有人要下车！” （someone wants to alight!). That is why I said it was indeed …. a ride.
The two main attractions we visited today was the Tea museum and the zoo. While I am not the biggest fan of visiting museums in general, the visit to the tea museum allowed me to gain better insights into the tea culture in China.
Here are just some random facts about tea in China:
1. Chinese tea was spread mainly to Korea and Japan during the Tang dynasty
2. Chinese tea major is a thing in ZJU
3. During the 19th century, Chinese tea production declined with the rise of South East Asia. With the help of technology and reforms initiated by tea experts like Wu Juenong, the tea industry in China managed to revive.
The trip to the tea museum also made me realise why tea is something so significant to China’s culture. In China, tea has not witnessed the ancient times of China where tea practices were unique to different dynasties, it has also witnessed the advancement of technology responsible for increasing the capacity of China’s tea industry which contributes a lot to China’s economy.
What came along with the Buddy day was a presentation the following day. During this presentation, all of us were given the opportunity to share what we did with our buddies with one another. We learned a lot from other students and their thoughts towards their Hang Zhou adventures during Buddy day.
Photo credits: Kenneth Sim & Jeremy Cheong
Click to rate this post!
[Total: 0 Average: 0]