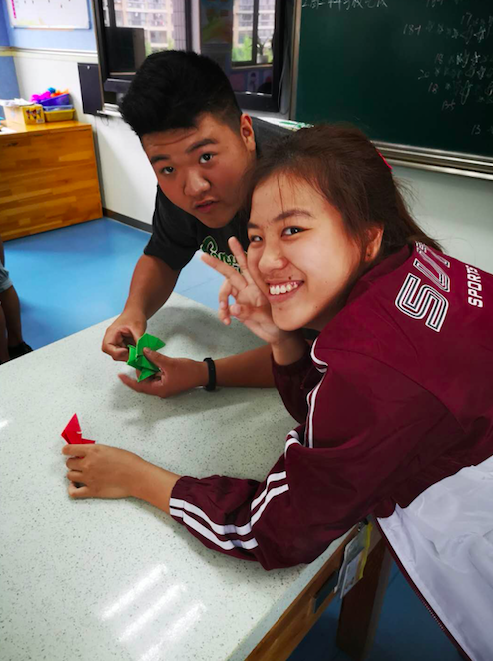 So this week, I had the entire room to myself because my roommate was out of ZJU. It was pretty timely as I have fallen sick ( so did she ) so the virus could be contained. Living alone never felt so great in certain aspects though. You could blast the music ( reasonably loud ) and sing. You could lie on the floor. Just some perks to name a few.

Maybe it’s the thing about living (completely) alone in the room that you start to notice things you never realise. The noise that your neighbors compose. At 10am, he was opera singing or some sort. Screaming his heart out. The view from the unit . Look quite like Singapore. Something I realised when I was blowing bubbles in the balcony.

In between days across this week, I played badminton with some of my friends which is also the first time I utilized the sports facilities in ZJU. Everything was so easy and seamless. The nets were all set up, courts were available on a first come first serve basis. All that is needed is your own racket and shuttles and a few friends. As much as this was the first time I was utilizing the sports facilities in ZJU, it was also the first time I was doing some sort of court sports since the start of summer- which was about time because I’ve been missing all the trainings back in school.

Time is running out. We have a book with pop-out animation using actuators due. After much consultations and iterations, we finally decided on the design of our book and the mechanics we wanted to use in the book.

This book is “KEEPING CALM” .

In this project, I kind of offered what was left of my writing abilities and had the task of writing the description of the book. This means I had to explain why our design (based on the template we gave the TA) is what it is.

Here is a snippet of it:

“The alignment of circles in a spiral shape were inspired by the aerial view of spiral staircases and bubble wraps. Climbing spiral staircases can be difficult and can be made simpler do not plan on rushing up that flight of stairs, just like how we should not rush to get our lives figured out in our 20s, 30s or even 40s. Bubble wraps gives a nostalgic feeling of our childhood habits of popping used bubble wraps which is a weirdly satisfying feeling. “

Lo and behold, we finally decided on the product we were going to design and prototype for the project – the nap lamp.

During the run up to the theme meeting on Wednesday, as usual, we were preparing for it all last minute. On my part, I had to sketch a storyboard ( sounds familiar from Design Fiction huh?) and place all the product information presentably on powerpoint, which is, honestly my favourite thing to do ( something I learned about myself during ALP).

What is design without prototype right? We found that it might be helpful that we came up with a crude prototype to convey the functions and interaction of the product. And it sure was. This is where all the taobao packagings come in handy…

Friday marked the last time we would be conducting activities with the Hu Shu students. For this week, we did something a little more different. For the first part of today’s session, instead of teaching them dances, origami and other things, the students let us experience what they do in school on a daily basis- mainly vocational skills like making milk tea, desserts, handicrafts and the famous 葱油饼。

For me, I managed to get to experience the making of milk tea as well as some handicraft. I was really humbled by the learning experience.

For the next part of the day, we taught the students some origami — paper container and paper cranes. As I knew how to fold both of this origami, I had to stand in front of the class and lead the class. It started off well, and then it became pretty messy as the students had different pace and started calling me over to teach them one-on-one.

That experience of attempting to teach children origami made me had newfound respect for the teachers in Hu Shu Special School. Because not only do that have to ensure classes were carry out, it takes much more effort to go the extra mile to ensure that all students are engaged. For us, SUTD students, it was easy to just teach the students who express interest in the lesson. But I reckon this is not the case for the teachers during their actual lessons.

It has come to the end of all the activities with Hu Shu Special School. I am some what grateful to be given the chance to be the leader ( it was a 50/50 chance between me and Wendy and LOL fate chose me ) of this TFI group because it has taught me a lot of things: conversing in Chinese on Wechat with the teacher in charge for one, proposing and planning activities for age-specific groups. As someone who organised an event once before in my entire life, this TFI experience enriched my organisational skills which is something really valuable to me.

Maybe its the thing about really metropolitan cities like Shanghai, violence was observed. We witness a fight on the street- people were being thrown on the ground, punches were made too. Compared to Shanghai, Hang Zhou is really safe and peaceful which a foreign student, like me can appreciate a lot.

If there is one thing I learned about myself from all the travelling out of Hangzhou at this point, is that my stamina for shopping is significantly lower than my stamina for hiking or trekking. hA.