It’s our 4th week here and luckily, I think we’re getting used to the heat and the mosquitoes. We went on an excursion to 吴山广场 (Wushan Square) this week and visited many places in the area. 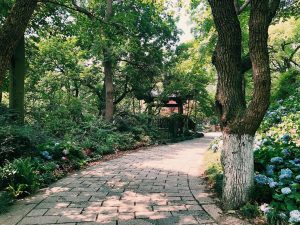 We started off with a short hike up to 城隍阁 (City Court). There weren’t many people around, which allowed us to experience the beautiful greenery better. 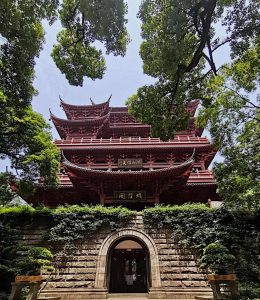 城隍阁 is only about 40m above ground, so we reached the top pretty quickly. At the top sits a majestic museum, but pictures really don’t do it justice (also the trees are blocking so no choice). We promptly entered the museum and we spent about 45 minutes in there. We also made our way to the very top, which was a pretty interesting sight. The air was quite foggy so it’s a little disappointing but we could still see all 360° around, and we managed to spot the Leifeng Pagoda at Xihu! 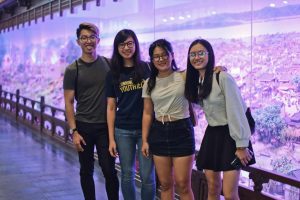 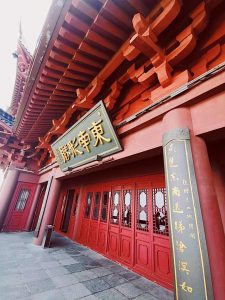 lol sorry blur photo but we don’t have many group shots :(((

After that, we walked a little back down the hill to 杭州历史博物馆 (Hangzhou Museum). The various artifacts kept in the museum dated back several centuries ago, with some items  from the Warring States Period. There were cups, spoons, vases and jars as well as old texts and stone plaques. Majority of these items were well preserved and it’s honestly so fascinating to see that even so many centuries ago, our ancestors still had these intricately made vases and beautiful crystal cups. 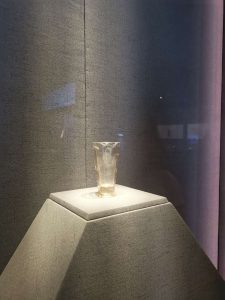 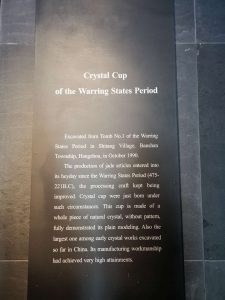 We didn’t go up to the second floor of the museum as it was soon reaching lunch time and we were all FAMISHED after walking so much. On the way down to 河坊街 (Hefang Street), our TA bought us some 杨梅 (bayberries?) to eat. None of us had eaten that before. It’s like cherry-sized and it has a seed inside. It tasted sweet/sour and the flesh was fibrous?? I’m not really sure how to describe it, the flesh was not a solid layer around the seed, but rather a huge bunch of bristles sticking out from the centre. Well anyway, we walked through Hefang Street and took a look at some of the tea shops, snack stores and all the random handicraft stands in the middle of the street. It’s actually my second time at Hefang Street, and I can vouch that it’s better at night when it’s not scorching hot and more stores are open!

Next up was lunch!! 新白鹿 is one of the more renowned restaurant chains in Hangzhou, serving up local cuisine at affordable prices! The 5 of us had like 7 or 8 dishes and it totaled $50 so that’s pretty nice. We didn’t have nice food pictures because we were starving and we ate each dish the moment it was served 🙁 but we had their salted egg chicken wings and some smoked (i think?) pork and I brought my friends back to 新白鹿 to eat those dishes again!

After a great meal, we were recharged and ready to walk more! We still had one more destination on our list for the day, 胡雪岩故居 (Hu XueYan’s Former Residence). Hu XueYan was a well known Chinese businessman, who was involved in the banking, shipping and Chinese Medicine industries amongst others. His former residence has been designated as a State Cultural Protection Relics Unit by the State Council of China and when we visited that day, we could totally understand why. 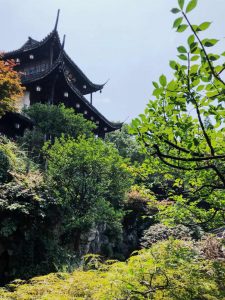 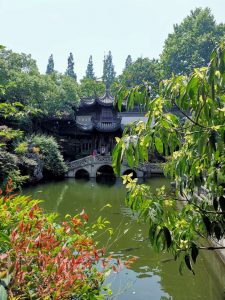 The place was full of tourists, all busy taking photos of the pretty flowers that surrounded the central water body. There were many koi fish in there, and there were some MASSIVE ones. Everybody was taken aback at how huge they were, spanning maybe 80cm in length???

We spent a really long time here exploring the whole area because it was so big, with many nooks and crannies for us to discover. There was a series of caves by the waterside and we had a lot of fun going around them taking photos and navigating through the tunnels. Also, we were in there because it was a lot cooler than outside. Our TA left us to go back to school, while we continued to explore and take fun pictures of each other 🙂 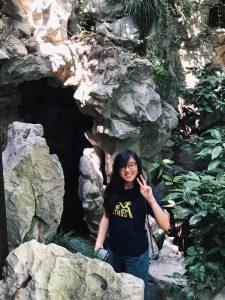 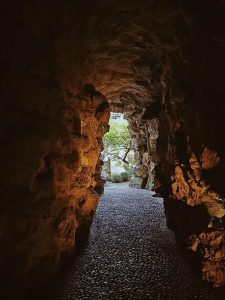 After leaving the place, we decided to explore a little bit more and hiked up some small hill near Hefang Street. We fended off mosquitoes and random insects, only to find out that it didn’t really lead anywhere. In the interest of safety, we backtracked and walked around the other roads neighbouring the area.

There were small bookshops, clothes stores and 一点点! We got our bubble tea fix after a long tiring day, and we found Jiangnan Copper House. All the art pieces in the museum, and even many of the furniture, was made of copper. 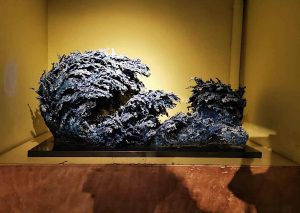 Calligraphy, murals and all forms of art flooded the museum and it was fascinating to see how much copper went into the production of these eye-catching pieces. One of them in particular, reminded me of one of Hokusai’s famous pieces from his collection “Thirty-six views of Mount Fuji” – The Great Wave off Kanagawa.

To end the day, we found a store along Hefang Street to sit at. At that same store, they sold many intriguing snacks like scorpions, crickets, STARFISH and seahorses too. Obviously, we didn’t try any. But we still sat there and chilled while drinking our bubble tea. It felt good to just rest our legs and pause for a moment. Not long after, we ended our trip and hopped on a cab back to school for our well-deserved showers.