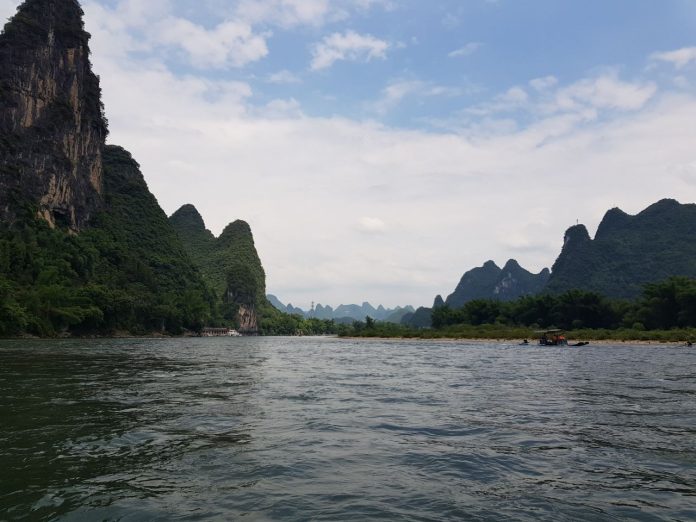 Recently, I had the awesome chance to squeeze in a 4-day trip to Yangshuo 阳朔, Guilin to enjoy its scenic landscape and local beer fish. Located north of Guangzhou, I took a 2-hour flight from Hangzhou to Guangzhou followed by a 1-hour train ride before I arrived at Yangshuo. I was pretty bummed about not getting a taste of Guangzhou’s supposedly yummy dim sum 🙁 But a BETTER adventure awaits!
“The river forms a green gauze belt, the mountains are like jade hairpins.” Han Yu, a Tang Dynasty poet wrote.
Yangshuo is well-known for its wondrous mountain range and is a haven for climbers. Even before I alighted the train, I was greeted by the amazing view of the karst terrain. Though it is said that summer is the best time to visit to try out the recreational activities there, brace yourself for the heat. It is comparable to Singapore, even hotter on some days. So I’m guessing right before summer (April/early May) would probably be the best time to go.
Every direction I looked to was a vision of delight. The mountains were part of the town, popping up between the buildings. I wondered whether the locals ever got bored of the view – should have asked.
To avoid going on about Yangshuo forever, I will restrict myself to a hopefully good summary of my trip there:
Places

1. Xianggong Hill 相公山 was the perfect location to get a birds-eye view of the Li-river flanked by the never-ending karst hills.

Waking up at 4.30am in hopes of catching the sunrise was to no avail as the clouds had nicely concealed it. Nevertheless, I got to see this STUNNING view! Con: The place was also swarming with tourists and photographers hogging the best spots.

2. A 45 minute boat ride along the Li River was another of my favourite where we sat on motor-powered “bamboo” rafts that cruised along the river. The earlier in the morning you go, the foggier the view will be, adding to the mystique of the river.

There was a name for nearly every limestone cliff from Pencil Hill to the famed Nine Horses on a Fresco Hill, leave it up to your imagination on how these rocks look like. The raft left from the town of Xinping where we spent some time exploring the commercialised old town 古城. As usual, I shared the streets, lined with snacks and souvenirs, with many many other tourists.

3. One of the places yet to be flooded with tourists is the Stone Village 石头陈. It was less than an hour’s drive away from Xianggong Hill. The problem was that there were a several different entrances into the village and I’d like to think that we took the most tiring route to get into the village – nearly 2 hours of trekking in and out with a pretty steep climb to get to the valley where the village was cosily located.

There it was clear, the handiwork of laying the stones one by one to build the old paths and houses was proper and deliberate. We entered one of the oldest looking house there and exchanged a few mumbles with the kind old man who lived there. His dialect was too foreign to be able to make out anything he said.

4. Another must-see area in Yangshuo is Shili Hualang 十里画廊 which is a long stretch of road with many activities and scenic spots along it. From 7am till 7pm, no vehicles are allowed in without a permit so most people took to walking, cycling or riding their scooters. Among the many attractions, there was the Big Banyan Tree, Butterfly Cave, fresh strawberries being sold, Moon Hill, Silver Cave and many more.
I did not manage to visit every one of them but I definitely had fun cycling along that 10+ km stretch while enjoying the view. There were several detours into smaller paths where you could explore more villages and rock formations up close.
5. The final memorable place for me was West Street 西街, a typical Chinese night market with street food and loads of vendors selling cheap goods. I loved the lively atmosphere there. It was also where they performed the Liu San Jie Impression 刘三姐. As it was a water show in the river, the Chinese had the awesome idea to create an entire barricade of water fountains to block the views of non-ticketpaying visitors on West Street. There were also trendy restaurants as well as the typical franchises such as Starbucks and KFC which made this part of Yangshuo seem the least rural.
Food
1. I guarantee that in nearly every Yangshuo restaurant, there will be beer fish 啤酒鱼 served as the specialty. It tasted like a decent fish dish to me.

2. Farmhouse rice, literally translated from 农家饭, basically refers to a meal cooked by a farmer or a person with a farm. All ingredients are supposedly freshly grown and bred on the farm itself. A local told us that sometimes, the chickens are purchased from markets and kept on the farm. We will never know how organic our meal was but, as long as the food was still good! One of the cooks even offered me the knife to slit the live chicken’s throat! I shut my eyes and made a horrible throaty noise when he offered the knife to me.

The common dishes were 农家 chicken, 农家 duck, 农家 swan, tomato and egg stir-fry and some variations of tofu. I had the best home-cooked Yangzhou fried rice and the most pungent-tasting tea with 5-star view by a quiet river. Those were some great hidden gems.

3. Though this blog post is already considerably long, I cannot leave out the BEST ICE CREAM I HAVE EVER TASTED 东北大板 and am still on a hunt for it from Hangzhou to Suzhou and next time in Shanghai. It was delightfully creamy but not too milky with the slight sour-ish taste of yogurt. And the WHITE of the ice cream was the most enticing-looking white I have ever laid my eyes upon. Definitely reserving an Instagram dedication for it when I finally find it again.

4. Lastly, here’s a brief mention of another Yangshuo’s local specialty, the Guilin rice noodle. It is a simple Singapore laksa-like noodle dish with a few slices of meat. When served, diners can customise their own noodles with an array of condiments, mostly chilli and some pickled food. Visitors to Yangshuo should give it a try but it was not a taste that I could get used to.

Yangshuo is already a popular destination for tourists and the influx of visitors will surely keep growing. Still, it is indeed a sight to see and highly recommended by none other than ME!

Thanks for making it to the end of the post 🙂 I enjoyed writing it.