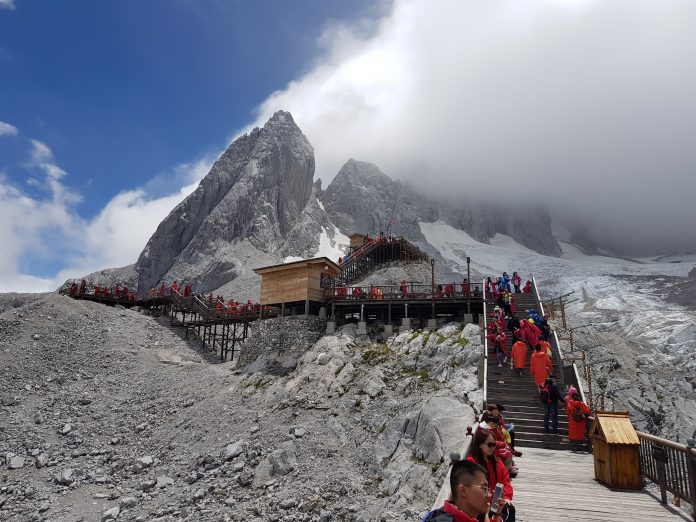 Lijiang City
Continuing from last weeks blog, our 10 hrs long sleeper train ride finally arrived in Lijiang, another town in Yunnan, higher up than Kunming at 3000m. As predicted, we did not get much sleep due to the little headroom and the constant bumps from the train. As such our first day at Lijiang was spent walking around the old town trying out local delicacies such as the 花饼，flower biscuit, and some 纳西菜，Naxi Cuisine(the local people of Lijiang). The rest of the day was spent preparing ourselves for the next day’s activity, heading up Jade dragon mountain. Not too far away from the old town was a mountain known as elephant hill. As Lijiang was surrounded by way higher mountains, elephant hill was tiny in comparison. However, elephant hill gave us one of the best views of the city of Lijiang. Furthermore, we got a glimpse of the famous Jade dragon mountain from afar and now we know how high we will be going. 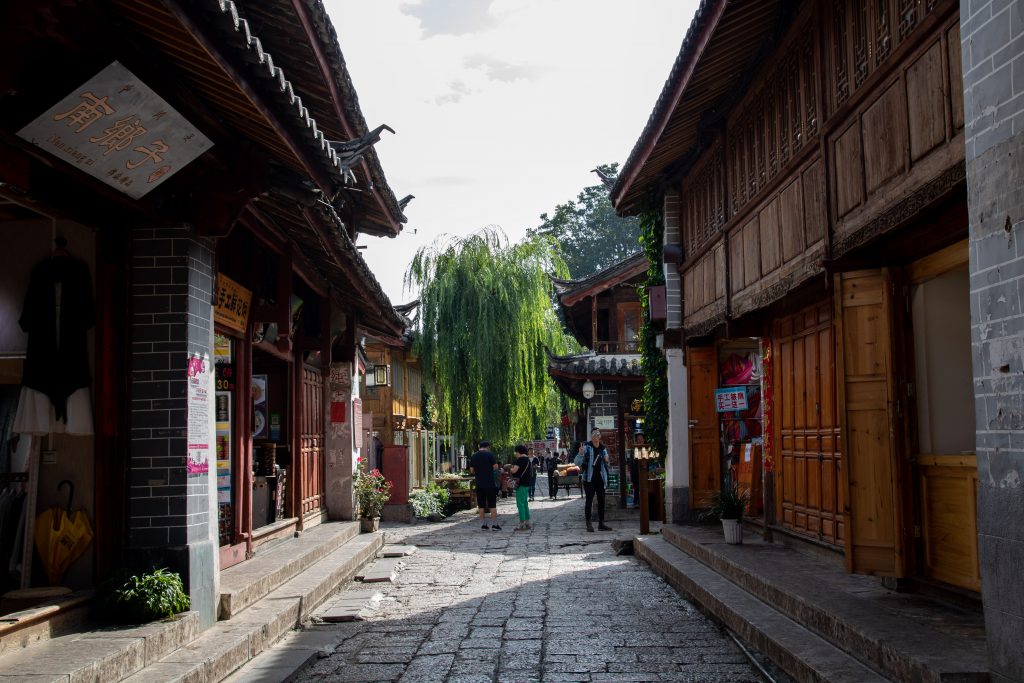 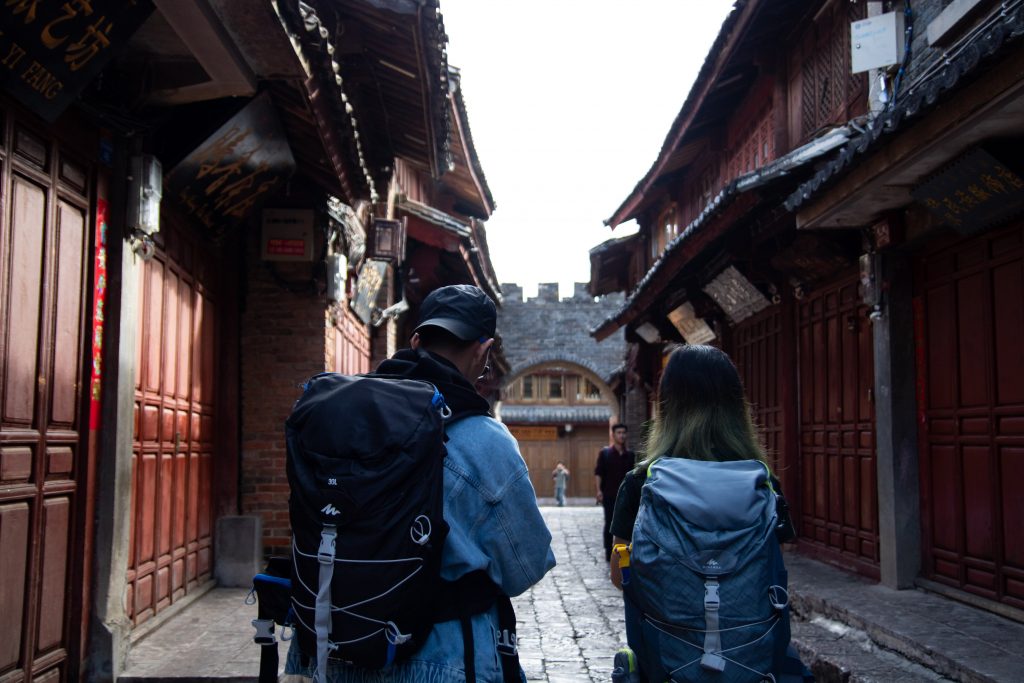 玉龙雪山 Jade Dragon Snow Mountain
The Jade Dragon Snow Mountain stands at a whopping 5500m. At that height, the temperature remains just slightly above 0 during summer while the oxygen we breathe in drops to about half of the usual amount at sea level. As such, we came prepared with a thick down jacket and a bottle of oxygen ready to battle with mother nature.

Our day started off at the base of the mountain, where we got to visit the blue moon valley, famed for its blue turquoise waters and water terraces. The water was crystal clear and some of the locals were actually drinking the water to taste it. Thankfully this park remains unpolluted and we were able to enjoy the beauty of it all. Unfortunately for us, it was pretty cloudy when we were there and we could not see the true colors of the pools as seen in images online. 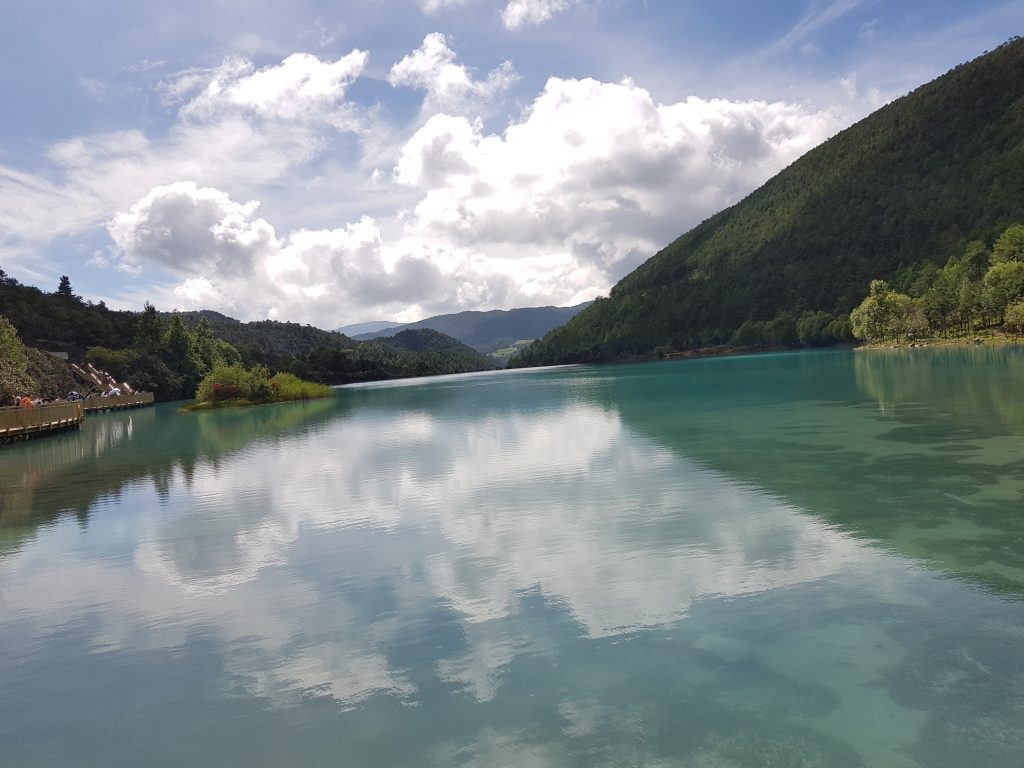 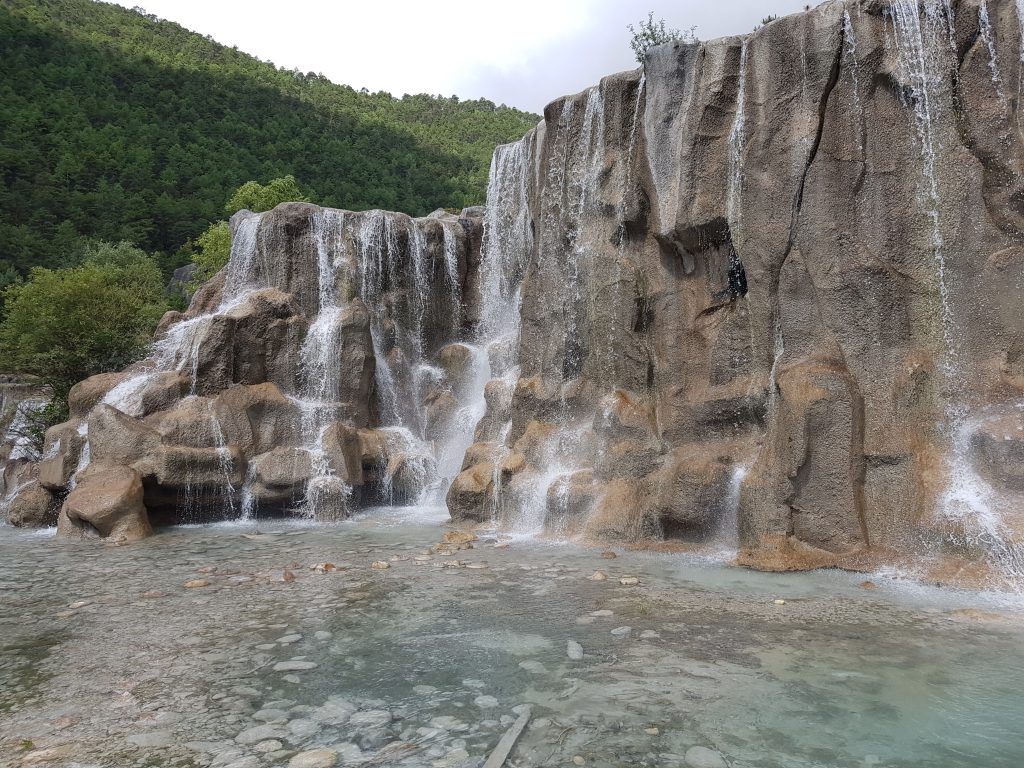 After exploring the depths of the mountain, now it is time to ascend to the heights. Here we began our long and tedious trek up to the peak of the jade dragon mountain! Oh, how I wish that were true! The route up was probably almost impossible, so we went for the next best option and took a cablecar up. The cable car brought us up to about 4500m where we will have to walk about 500 more steps before we reach the highest viewing area at 4680m. While walking up we saw many drained faces, probably suffering from the lack of oxygen, many old, young and even healthy people all sitting along the steps trying to catch their breath. Mother Nature does not discriminate. We, being young and ambitious, tried completing these steps in one go but soon found ourselves gasping for air through the oxygen canisters. With the lack of oxygen, every step felt so heavy and every flight of stairs felt like a mile long. With much perseverance, we finally made it to the top! Where we got to enjoy the view of the peak of the mountain as well as the glacier park, formed at the top year-round. 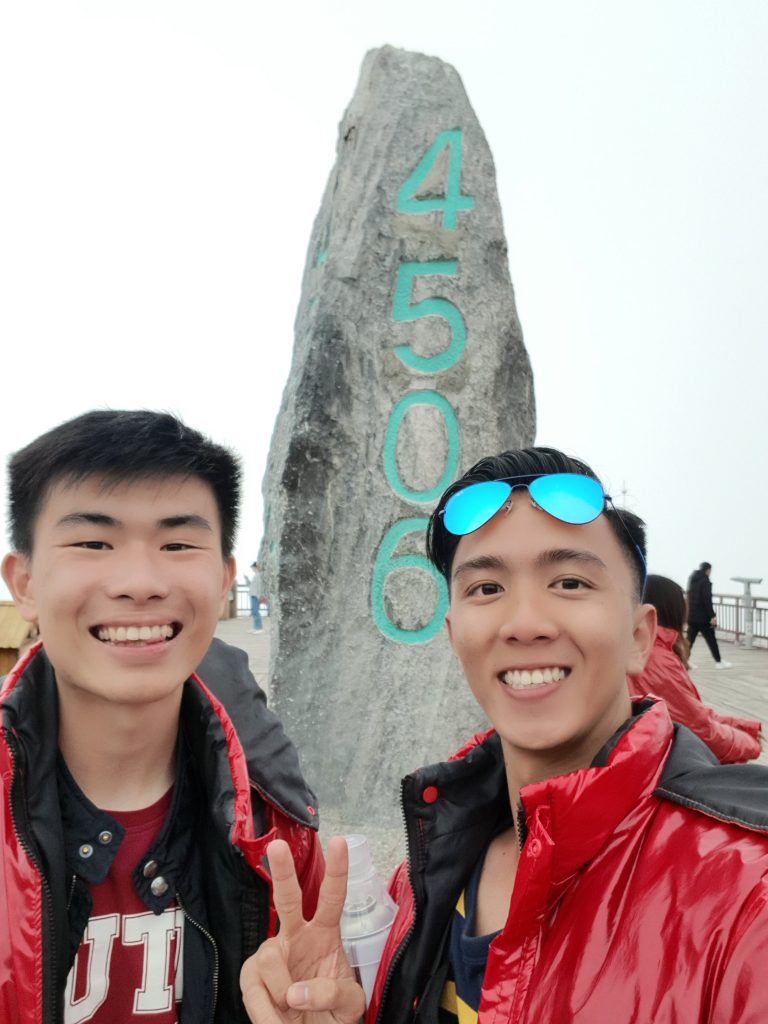 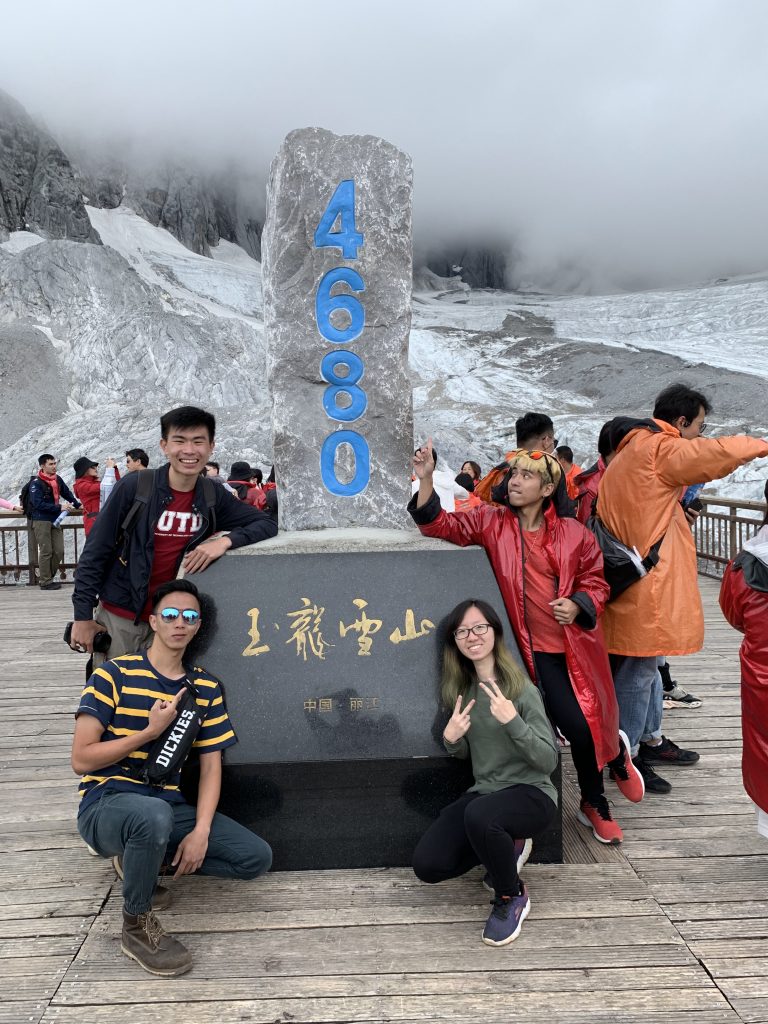 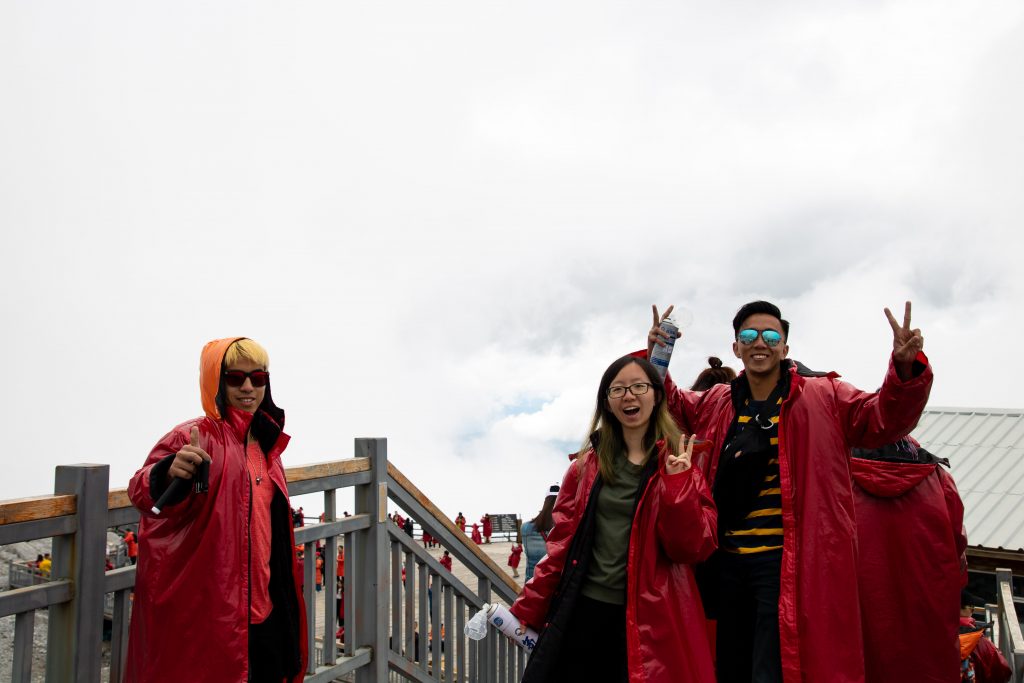 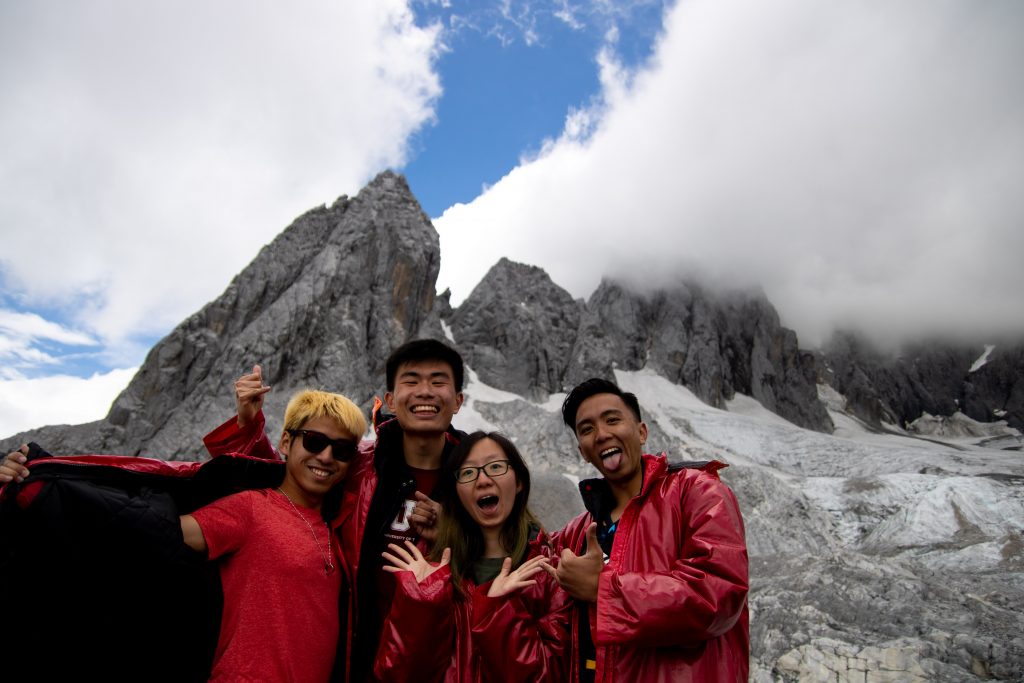 Sadly, this is where our mountaineering adventure ends. We now have to make our way down to catch our ride back to the city of Lijiang. The way down was surprisingly much easier, the 500 steps felt so little and we reached the cablecar station in no time. Heading down the mountain and back to town, we now need to rest and recover for our next adventure in the mystical town of Shangrila. More trekking awaits us…