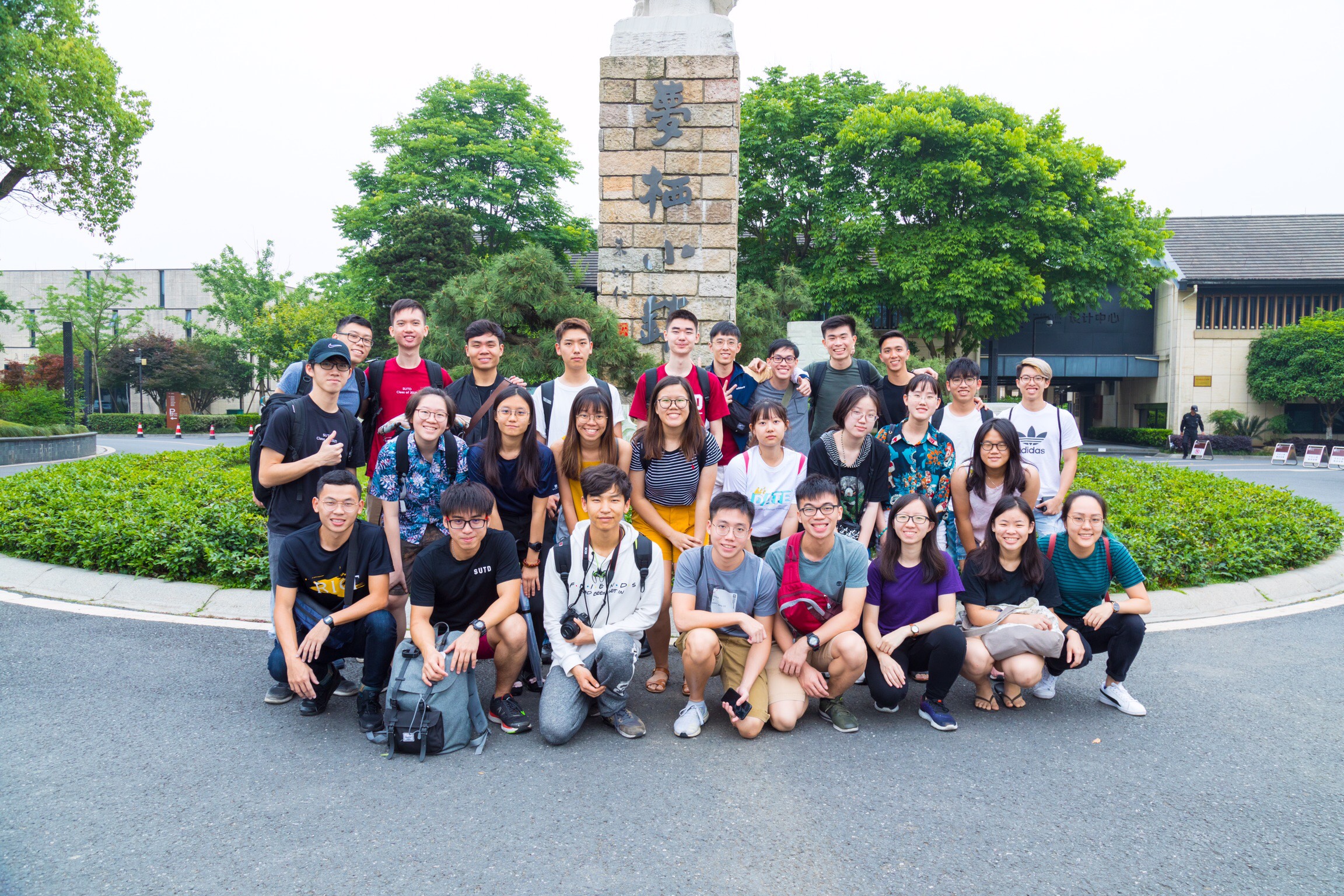 First week in Zhejiang has been a relaxing and interesting week~

As group work has not started yet, after settling the bank account and mobile phone number on Monday, we are all free to travel around and explore this new place. Not to say, life is really convenient once bank and mobile phone is settled, as 99.999% of the things here can be done through Wechat and Alipay: taking train, ordering food, paying shops, etc. The only thing that is so far still not good is maybe just the wifi speed…

As of dinner, we went to the street behind the hostel and decided to have Mala as our first meal in China (other than school canteen for lunch). We only ordered 小辣and微麻yet 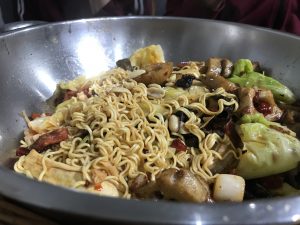 everyone was about to cry already, ate a lot of rice to counter that feel. It was a really cheap meal as well, all in all 8 of us each only paid 19RMB to get this decent meal. And coming to country like China, bubble tea is one thing you can’t miss out! so after the pain from Mala, we went to 1點點to look for compensation. Recommended by the seniors in SUTD, this is a really really nice bubble tea shop!

On Tuesday, there are different arrangement for different groups of people, and our group went to this place called 夢棲小鎮which is basically an industrial park of all the innovation center. Saw quite a few interesting designs and innovations around, and learnt something new from the tour guide. 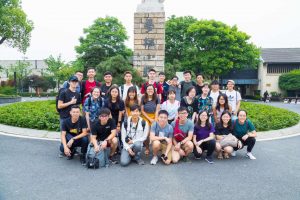 For dinner, we went to the same street again, but this time round, we decided to eat all the street snacks rather than eating in one of the restaurants. We tried this 鴨肉捲 which is really tasty, a thin wrap filled with cucumber and duck meat, pretty good as a snack. There’s also this thing called 長沙黑臭豆腐 which is a black stinky tofu, nothing very 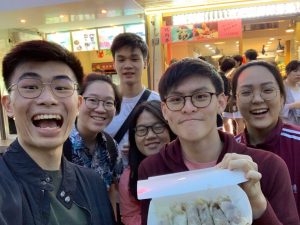 interesting in terms of taste, but a good choice if you just wanna try something that looks weird. For the same stall, there is this 烤年糕which is a pan fried rice cake. It is really chewy like mochi, very crispy outside, topped with a sweet but a bit spicy sauce. Greatly recommend it!!! Another interesting snack would be 涼糕, it is like a pudding but made with rice. It is put together with hawthorn and resins and a lot of brown sugar water. Sweet but won’t get sian easily, but still more recommended to share one together with a few people. There are some more but these should be enough food to intro for a day.

Wednesday is nothing much as there is nothing planned, so a few of us just walk around the school to explore this super huge campus. Came across this garden in the school called 南華園which is a small Chinese architecture building built upon the river that passes through the entire Zhejiang Campus. Surrounded by a lot of greeneries that are rather like a jungle, a lot of birds can be seen around the area.

Dinner for the day is good as usual. We went to this traditional porridge shop. They have pumpkin porridge, green bean porridge, …,etc the simple traditional type porridges. As not all of them have strong taste, a small jar of sugar is provided for people to top up is their porridge with preferences (YES! PORRIDGE WITH SUGAR! DON’T DOUBT! IT’S NICE!)

Thursday is kind of the first time our team meet up. Together with the Tas, we went to the restaurant called 童年小築nearby the school to have dinner. The professor wasn’t present though, told the seniors that this meeting would be probably be more relaxing without him present (joking). Anyway, both the professor and Tas are really friendly and interesting at least for now. Back to the food again, we have some braised pork with fried tea leaf and it is damn nice!! Like although the pork got a lot of fats but it is the first time I don’t feel disgusted by it cause it is just so chewy and tasty, besides, the fried tea leaf tastes like seaweed. Another special one to me would be the sugar fish. Not sure of the way they cook it, but the fish is sweet and topped with sugar strands, really really nice! We had some traditional drink called 玉米糊 which is like corn soup but blended corn, feels a bit weird to drink it at first cause it is really like a soup…but anyway it tastes pretty decent, quite sweet. For this meal, 5 of us finished 9 dishes in total, indeed a super fulfilling meal. 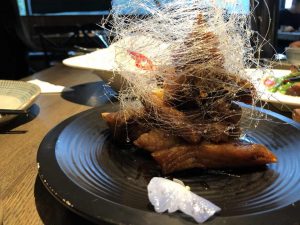 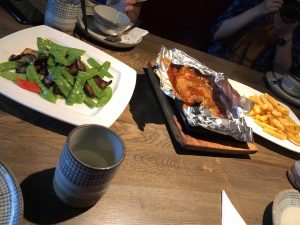 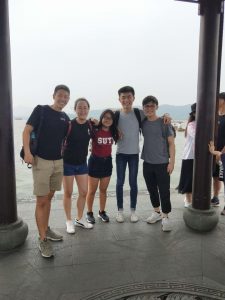 On Friday, a few of us decided to visit 西湖 the west lake. The weather was pretty nice, cloudy but not rainy, but the food there is not as nice, sadly. We first went to 雷峰塔 which is a great tower with a mythical story about the love between a snake (which turned into human form) and a man. The base of the tower introduced the history and architecture of this tower, going up, the level is with the entire wall of wood carving telling that mythical story. Following that, we reached 3rd floor of the tower and could start looking out, together with this floor is a ceiling of poem describing the beauty of Xi Hu; 4th floor is similar but with drawings of Xi Hu, and finally we reached the 5th floor (the highest we are allowed to go). The scenery is mesmerizing and the breeze up there is just so chilling, however it was a bit too crowded there so we didn’t stay for long. After visiting the tower, we went on to cross this long bridge across the Xi Hu, along the bridge were some food that is normal but relatively more expensive as compared to the others stalls out there, so it would be better if you have your own snack. 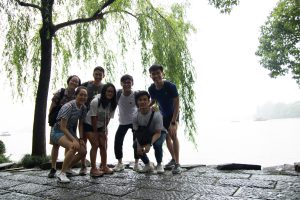 On this good Saturday, we met our ZJU buddy and tour around the city area in Zhejiang. 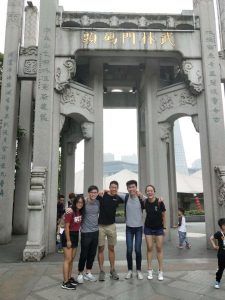 We went to 武林廣場which used to be a popular gathering spot before all the shopping mall beside it was built. The went to this building which used to be MOE last time, then transferred into a law court, and now an exhibition center to display the historical events happened to it and Zhejiang itself. The buddy also brought us to this 京航運河 which is a huge canal built in Tang Dynasty connecting Beijing and HangZhou. Soon after that we went to the Orchard in Zhejiang to have our lunch – hotpot! Again, we are trying new food here. Most special ones being pig brain which tastes like tofu (recommended to eat with more flavored sauces), duck blood which is like a salty and spicy pudding! Ordered damn a lot and it costs cheaper than 海底撈in Singapore!!! 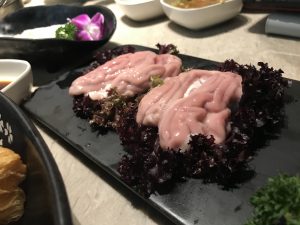 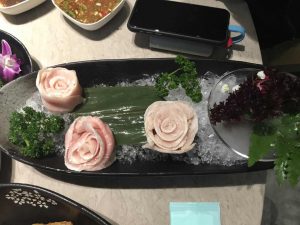 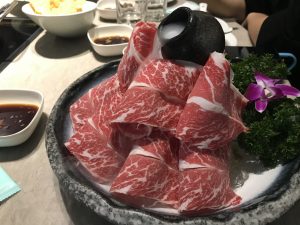 Last but not least for the last day of the week, we went to 龍井村, having to climb 2.6km 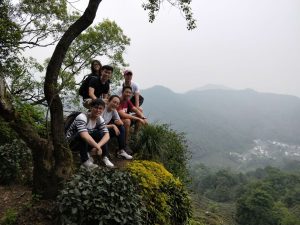 from the other side of mountain, we reached the peak only after an hour (with much stop to rest and take photos). The scenery was damn good and the air also feels much fresher. It is really interesting to see how tea are planted in such way and also scary to think about needing to climb up and down like this when the villagers were to collect the tea leaves. Nothing much about this but really just relax and enjoy the greenery there~