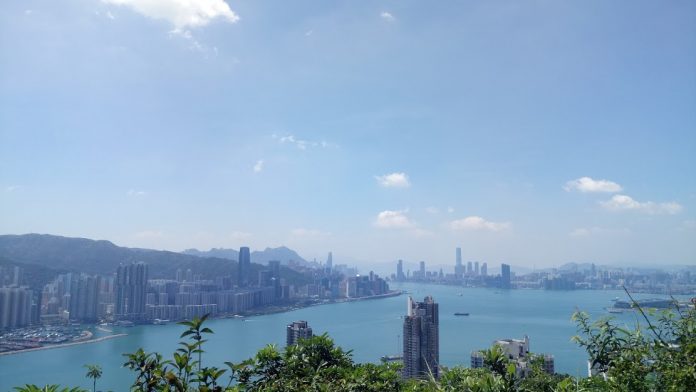 The calm before the storm was the way to describe the fantastic weather condition that day.

One day before Typhoon Mangkhut arrives, the clouds in the sky cleared resulting in a bright blue contrast between the ocean and the sky. Given how well the previous hike to Victoria Peak went, Shirley and I decided to hike up Devil’s Peak which is located at the eastern part of Hong Kong.

Being a last minute decision, we only planned the trip after we had arrived at Yau Tong MTR Station. This was a huge mistake since the location of Devil’s Peak on the google map was wrong. We only realized it after blazing the sun to see the entire area being sealed for housing development. The actual Devil’s Peak is known as the “Top Battery of Devil’s Peak” on the google map and is situated in the opposite direction from the ‘wrong’ Devil’s Peak. It is part of the Wilson Trail section 3 located right beside the Junk Bay Chinese permanent Cemetery.

Devil’s Peak is a historical site where we get to see remnants of the military structures in certain sections of the trail. This peak was previously occupied by pirates who controls the passage of ships along Lei Yue Mun into China, which explains the appearance of the redoubt and battery during the hike.

The views on top of Devil’s Peak was magnificent given the beautiful weather conditions. An unplanned trip has both its perks and consequences. In this case, the breath-taking views completely overwrote the annoyance we felt from the detour made.