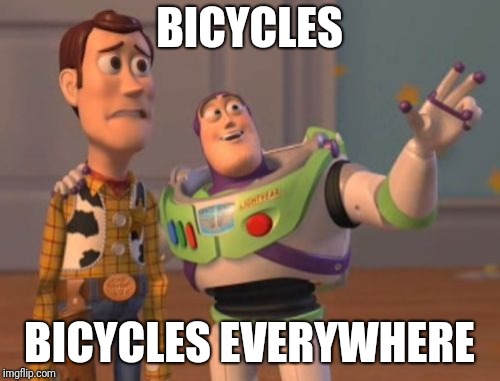 Been a while since I’ve posted because I have been going around to do various things in this once in a lifetime opportunity to come to China for 3 months. Will be writing many blogs in a short span of time from now on. So in today’s blog, rather than posting bout my adventures which I will definitely be covering in upcoming blogs, I have decided to post about bicycles.

Bicycles, to most, are simple commuting vehicles but to me, they are so much more.

Well since young, I have to say that I have been pretty bad with wheels. The only thing I could go around comfortably in that has wheels were my heelys, but even wearing those I have fallen countless times.

I did not really learn to ride a bike till secondary 2 but met with a pretty traumatic experience then which led to me staying far away from bikes ever since.

The story was that I went for this chalet at East Coast Park with my friends who were all really good at cycling and they wanted to cycle to Changi Village and back that night. I was literally the only one there who does not know how to ride a bike but they promised that they would teach me how to that night and then cycle with me there.

Well, being a complete newbie with a old rented bike and over 30km of road to cover for the night, we can all guess how it turned out.

They did try to teach me how to ride a bike, at least for the first 5 mins, and then the impatient ones left ahead, leaving one really helpful person to watch me fall a couple of times and to laugh at me while I picked myself up.

So I struggled but eventually managed to get my balance and could get myself to cycle ahead and went along the path painstakingly. But what I did not expect was cycling such long distances when u literally just learnt to ride would be such an ordeal.

I literally was halfway there towards Changi Village before I saw the impatient group cycling past me, on the way back after their hearty supper at CV. That was how slow I was. I then grew really impatient and kept pushing ahead even though I was really tired and full of bruises, some bloody. It was when I knocked hard into the side railing of a canal and almost fell in that made me finally give up. This left me traumatized and thus I never rode a bike again till recently.

My first month here, I chose to walk for most part wherever I had to go and it was fine because the weather was great. But recently, the weather was simply blistering hot and I wanted to get out of the heat as fast as possible. Thus, I decided to give bicycles a second chance and have not regretted ever since.

So what so great about riding a bicycle around Hangzhou?

Firstly, there are bicycle lanes that are actually very wide so it is a lot safer to ride on those then on pavements or on the roads. This really allowed me to feel a lot more secure especially since I am definitely not a pro at cycling and still had problems steering very well. Though something annoying is that motorcycles and scooters also use the same path and they are really impatient, so they always travel past you at really high speeds or honk you when you are too slow.

Secondly, I do not need to pay a hefty deposit to use the bikes. No hefty deposit, means no need to fight for refunds (ahem Obike). There is these bikes called HelloBike by Alipay that we can use just by scanning the QR code using the Alipay app and we only need to pay a nominal fee of 9 yuan per month. That is less than 2 sgd! They can be found all over Hangzhou.

However, I realised that their abundance is very much limited to Hangzhou, I found a couple (literally 2) in Shanghai but just as I wanted to use them I realised their QR codes were destroyed. No idea why this happened but I could not use HelloBike elsewhere other than Hangzhou.

Lastly, there are just so many bikes here in Hangzhou, and they are surprisingly well serviced/oiled. Once in a while, I would see this huge trucks that would stop by roads, to collect damaged bikes and replace them with newer/repaired ones. The app also makes it really easy to report a damaged bike. This means that I can find working, new bikes everywhere, allowing a new rider like me to ride more easily.

However, this also meant that since bikes are everywhere, they can be quite unsightly as well. I do not think i can take a picture of any road without having bikes in the frame. But it makes things more convenient so I am not complaining.

I guess with this experience, since now I am more confident, I might actually be riding more bicycles when I am back in Singapore. This will certainly help me minimize travelling time.