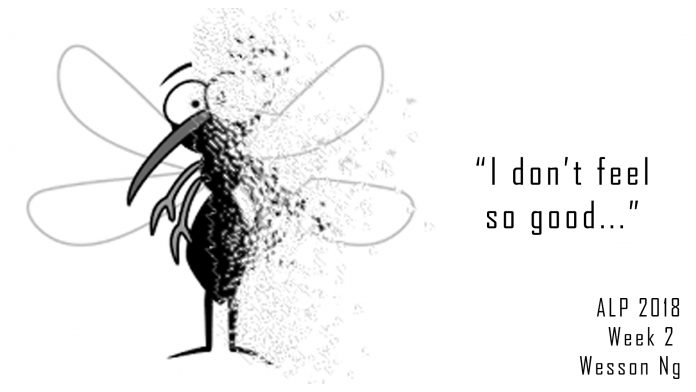 WASSUUPPPPPPP! Welcome to the second blog of the SOOOO MUCH/MANY series. I did mention in the first blog that I would “say yes to everything that I normally would not have said yes to” BUT, mosquitoes are a big no-no.

Well Singapore has its fair share of mosquitoes, no doubt, especially for those army boys who have been to Lim Chu Kang area (I know you all can relate to me). But mosquitoes in China are seriously way too abundant and have simply no fear!

It does not help that I have really alpha blood (the mosquitoes cant help but want a piece of me! jk) and really bad skin condition. I’m always the first/only one to be bitten when I am in a group of people and my skin simple does not recover from mosquito bites and leaves horrible scars after the bites.

Throughout these two weeks, it has been relatively easy to adapt to Hangzhou. I love the food, the accommodation is great, weather is horrible(just like SG but slightly better because sometimes its cool), the school is great, etc. BUT I simply could not adapt to the mosquitoes. So I told myself, since I cannot adapt to it, ill have to fight it instead. So here is how my two week long battle with mosquitoes went.

At first when I just arrived, I had my first night in my room and I woke up with a few mosquito bites. Not thinking much about it, I just went on with the day and then woke up again the following days with another few mosquito bites.

Then, I thought hey maybe its just one or two mosquitoes buzzing around so I spent a good 30 mins that morning and exterminated 2 of them thinking I’ve wiped out them out.

The third night, went by well where I could even wear shorts to sleep without getting bitten so I was feeling great that I have solved the mini mosquito problem. Speaking to some of my friends who similarly complained about mosquitoes in their room, I proudly said that I killed some of them the previous morning and had a good nights rest. They then warned me that there is more from where the mosquitoes came from but I was like “meh, Ill keep everything shut,” so no more mosquitoes can fly in and just walked off proudly.

Well that is when everything went really downhill.

The fourth night, was HELL. Possibly attributed to the sudden increase in temperature and my complacency leading to me wearing shorts and short sleeve to sleep. I woke up looking like a swollen beast.

No joke, I was bitten in so many places, even in places where the Sun don’t shine they say.

A further check, revealed that my balcony door was not closed properly, leading to a free entrance to a buffet of me and my roommate.

That morning, after killing a bunch of mosquitoes and realising that I probably only wiped out the pawns, I went immediately onto Taobao and purchased a mosquito trap.

Well, Taobao is fast, but it is not fast enough, meaning I had 2/3 days more before the trap arrived meaning that I had to flip my cards horizontally and go into defense position.

That night (Fifth night, if anyone is still counting lol), I slept with long pants and long sleeve. BUT I WOKE UP WITH MY FEET COVERED IN BITES.

The next night, I slept in long pants, long sleeve AND SOCKS but i woke up with bites on my face and neck.

That day, my mosquito trap was still not here so I had to go into another night of battle. I then added on a stretchy bandana to the mix which I could use to cover my face and my neck area.

Just as I thought all hope was lost, MY MOSQUITO TRAP ARRIVED!!!!!

The first night with the trap was great, along with my armour, i didnt get bitten 🙂

Multiple mosquitoes were caught but I suspected there were still more.

My suspicions were true because the next night, the mosquitoes grew smarter and no more mosquitoes were caught in the trap.

But since my armour is fool proof (I resolved my hands being bitten by hiding my hands in my pants LOL), they didnt bite me.

HOWEVER, THEY KEEP BUZZING BY MY EAR. AND HONESTLY, I WOULD RATHER THEY BITE ME THEN TO BUZZ BY MY EAR WHILE I SLEEP.

So I taobaoed gloved HAHA. And added one more piece of armour (a shirt) to cover my ears/face when I sleep so the mosquitoes wont even know where are my ears to buzz around it HAHA.

This is my full build.

From left to right, Socks, Bandana, Gloves, Shirt, Long-sleeve shirt, Pants. All black in case Hangzhou mosquitoes mutate to have colour distinguishing eyes. Doggo above in case some of them are scared of dogs, or to take some bites from me (do mosquitoes bite dogs? hmmmm).

Well, I could get more weapon to fight them honestly, like mosquito coils, electric swatters, etc. But I have given up because I think they will just grow to outsmart me… That means Ill stay in full defense mode till the end of ALP.