Our very 1st activity, on the 4th June, was a paper plane flying competition. There, we interacted with and engaged primary school level children of Hushu Special School (though they might be of older age than their peers elsewhere). Personally for me, I had almost close to no experience dealing with children of special needs, much less Chinese children of special needs – the need to use Chinese on top of the already present communication barrier just makes it 10x harder at least, and I’m not even exaggerating. That said, however, I tried my best to interact with them (because that’s most important after all) although 90% of the time I was learning how to engage the children and gain their attention instead. The children present are of a wide range of special needs, and figuring out that is just the first step. The student I was with most of the time, 蓝玉 Lan Yu (sorry I forgot to take a photo of him), is one who suffers from autism, and this in itself, is another huge spectrum altogether. Getting his attention already takes up 90% of the time I had with him, much less being able to even begin teaching him how to fold the plane. The kind teachers stepped in to help teach him. In the end, some of the paper planes folded were unfolded to let him doodle on it to gain his attention. I folded him a paper ‘crush gear’, something reminiscent of the childhood of most Singaporeans born in the 90s, as a gift. Though he didn’t take it or keep it with him, I hope my interactions with him had brought something different to his everyday experiences. 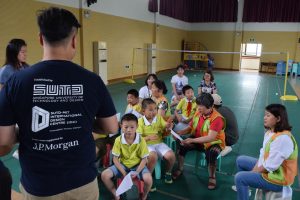 It was a privilege to be able to visit the Yamaha Factory in Hangzhou. Of course, as you would have expected, no photos are to be taken during the entire visit for business secrecy purposes so instead, I could simply just share my thoughts: This may have been my first visit to a factory, but I know that most factories nowadays are largely automated to aid output. Though technology advances over time, some processes are still not replaceable yet, and so the entire manufacturing process is still largely manual. What I saw was a lot of effort (not blood, sweat, and tears because you know, if these end up in the wood, it can’t be use to make the guitar or the piano) and attention to the smallest details, because of the nature of the manufacturing process. As a musician, while I may not play the guitar or the piano, I still appreciated these painstakingly hand-crafted products, and I could respect each and every worker in the manufacturing line. Still, I wished I could have visited the Yamaha Factory in 萧山 Xiaoshan, which is really only 10km in distance away from the factory we were at (it’s like so close yet so far, considering that we are in China), because they produce drums over there. Oh wells.

We went back to Hushu Special School a 2nd time the same week, on the 8th June, and had dance lessons planned for the secondary school level children there. The dance lessons were planned, choreographed, and led by Wesson, Timothy, and Kenji. Kudos to them. We were surprised that the kids picked up the dance much faster than expected and so we had impromptu (though they don’t look impromptu at all) performances by Kenji, Marcus, and Timothy to help further entertain the children and the teachers. All in all, we were happy that the children all enjoyed the session we had planned for them. Though not all of us can dance (I speak more for myself as I am far too clumsy to be able to dance), I believe we (or at least I) wouldn’t mind making a fool out of ourselves if it means bringing a smile to all of their faces.

I was so stoked when I first heard that Cremia is available in Hangzhou because not all cities in China has it. I decided that I’ve got to get one here after having eaten this in Hokkaido itself years ago. It’s so good, it deserves a post by itself. Initially, I was quite concerned that this was a limited offer after reading an article (written in 2017) found via baidu. Further searches on baidu only revealed older articles. Thus I had decided to call KFC China to clarify. The nearest store is about 4km in distance away from ZJU but even that was easily covered with a bicycle.

Now, for the review: Easily one of the best ice cream ever. The cream is so smooth, and milky, although compared to the Hokkaido one, this is sweeter and less milky. But if you ask me, it has achieved at least 90% of the original taste. As for the biscuit cone, it resembles a type of buttery biscuit, crisp, buttery, sweet, even more so than the cream itself so that its flavour is still able to shine through even after you have enjoyed most of the cream. When you think about it, this is like an entire package, and it’s what I admire a lot about the Japanese – but that’s a story for another day. 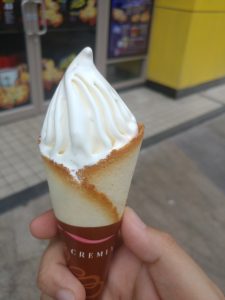