This week was the final showcase of the origami projects of the various groups. In this module, we were divided into smaller teams of 5-6 members and went through a 4 week course on designing an interactive origami exhibit. The weekly deliverables and lessons were designed to introduce us to the art of origami folding.

Through the lessons and templates provided, we were able to make our own origami structures. It is amazing to witness a simple piece of paper transform into a 3D structure capable of folding and unfolding, expanding, stretching and collapsing. They were controlled using arduino servos.

For our final showcase, the challenge was to design an interactive exhibit. We had the opportunity to make use of sensors to measure a variety of inputs, from distance to motion to temperature. Perhaps the most challenging aspect was to come up with the logic for the response of the origami and a storyline for our origami characters to follow. The students had an eye-opening experience not just into the world of origami, but also into the world of interactive AI.

Left: An origami elephant which responds to the surrounding light and nearby visitors.

Right: An origami dragon which responds to approaching visitors who attempt to remove its treasure. 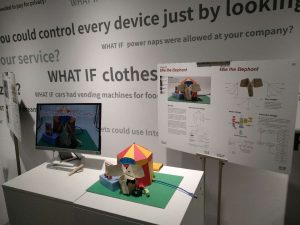