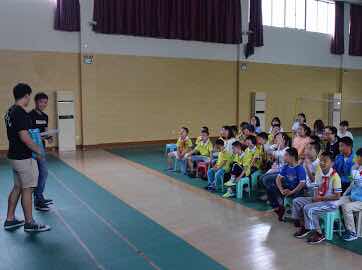 On Monday, it was time for our very first session for our CIP in Hangzhou and for our first session, we decided to do a paper plane folding competition. We started off by teaching some simple paper plane designs and slowly progressed to more complicated designs. Although the children could not fully grasp the more complicated designs they were very satisfied with the planes with more simple steps and designs. It was heartening to see that even with just throwing around simple paper planes it made them so happy and excited. It really reminded me to appreciate the simple things in life even as simple as a paper plane.

We then proceed to the classroom to start the plane decoration portion of the day. In my opinion, this part was a little more challenging as compared to the first part as now we had to guide them in their drawings and not only was I not very good in drawing, but I also had problems capturing their attention and the language barrier certainly did not help either. However, with the help of the teachers and my fellow friends in TFI I slowly got through to some of the kids and retain their attention and get some progress on the designing.

The last part of the session was the paper plane flying competition where they competed for whose plane could fly the furthest. I felt that the kids had a lot of fun throwing the planes and getting the prizes that we had got for them and although just a simple competition they were happy and that is all that mattered. On Tuesday, I had the chance to visit the Yamaha factory together with 24 other people in ALP. It was quite a long journey to the factory where we had travel for over an hour by bus to reach the factory. Sadly, there were no pictures allowed in the factory.

The attention to detail at the factory of each of the craftsman was quite incredible, each string, each hammer and each piece of wood was finely tuned and put together by each individual craftsman. It was quite amazing to see the creation of each piano and guitar as we moved along the assembly line and watched as the product evolved from simple pieces of wood with many strings to a full-fledged product complete with the lacquer and packaging. The company also takes into account the environment the product is sent to and the area where the product is stored in. They replicate the environment the product will be sent to and in a way prepares the product for that environment. This is done so that the wood will not warp, shrink or expand which will prevent the sound quality from changing.

Another interesting thing I learned was that although the company uses technology to do quality control and testing, the final testing was still done by a human. This in a way demonstrates the limits of today’s current technology where things such testing the sound quality and the final finish of the product is still done by humans, perhaps due to the expensive nature of these kinds of technology or that technology is still not competent enough to do such precise testing. This also in a way serves as a challenge to not only engineers in the world but also myself as we try to streamline the production process through technology.

On Friday, it was time for our second session of our CIP and this time we were going to teach the kids a dance routine. It was quite fortunate that we had quite a few dancers in ALP and they choreographed the entire routine while we helped in the managing the children learning the dance. The kids picked up the dance moves relatively quickly and soon we were doing the entire routine together. I think all of us had a lot of fun interacting with each other and learning the dance together. To my surprise, there was another group of students from another school learning the dance and interacting with the kids as well. I soon learned that they were also volunteering and had prepared a program for the kids in the afternoon. I had a lot of fun interacting with them as well as we discussed our different country’s culture, food, habits and so on.

The kids had picked up the moves for the dance so quickly that we ended up with a lot of time left over and through the quick thinking of some of our leaders and dancers they decided to entertain the children with some performances. First up were the dancers, comprising of Tim, Wesson, and Kenji where they showed the kids the very first song they choreographed, and the kids enjoyed it. Next up was Kenji again where he wowed everyone with his Wushu performance. Following that it was Tim’s turn to take the stage where he showed off an impressive Latin dance display. Last but not least, Marcus finished it off with him singing an Ed Sheeran song. We all enjoyed the display of talent by just a few of the ALP students and I am sure that there will be many more to come.

On Sunday, it was the start of our first excursion out of Hangzhou together our theme project group members, we decided to go to ning bo which was the hometown of our teaching assistant (TA)  to pick yang mei (Chinese bayberries) and visit one of the factories in the area. The day started out early at 8 am where we gathered and slowly made the 3-hour journey to ning bo.

After the long 3-hour journey we soon arrived at our TA’s house where we were treated to a small tour of the house where we soon found out that in addition to the large house there was a small factory in the back. The factory housed many spools of colored treat and we even got a look into some of the machinery that were used to make these large spools of thread. We then proceed to lunch and soon after we started our berry picking adventure.

We first started off our journey from our lunch place with a 20 min walk to the beginning of the trail. The trail started off right beside the lake and slowly changed to a walk through the forest. After about 10 minutes of walking, we finally go to the place where we were supposed to start picking yang mei. We all started picking and eating the berries immediately and I have to say that it does not get much fresher than this. The berries were sweet with just a hint of sourness which all of us really enjoyed. We learned that the darker the berries the sweeter the berry was and soon all of us were scouring the area of the darkest berries we could find to get the best of the fruits. After we had all had our fill of berries, we made our way back to the bus and proceeded to our factory visit.

The factory was an electrical wire making factory where they made cable and wall socket plugs and merged them together. The factory did almost everything from scratch, from thinning the copper wires to the correct diameter and inserting the copper wires into the cables to soldering and assembling the entire cable. What was interesting was that they had a mix of both new and old manufacturing techniques where the old technique was to assemble every component by hand and the new which was using machinery to automate the entire process. The even more amazing thing is that the company made these new machines completely in-house making it somewhat of a company secret and we were allowed to take a look at it. After the tour, it was time to make our long 3-hour journey back to Hangzhou and that concludes the week.