This was one heck of a trek. It was about 18km of dirt roads, the entire route filled with uphills and steep downhills complete with high stone steps, and very occasional flat grounds. This is probably the most difficult trek I’ve completed so far, especially so since I had a bad knee. At times, I even questioned my own decision signing up for this. Having a stick with me made the going down a little easier as I could put most of my weight on the stick instead with minimal risk of aggravating the already bad knee. As the saying goes, ‘I took an arrow to my knee’. While I didn’t actually ‘took an arrow to my knee’, I used to have almost no problems trekking until I had the bad knee. But if asked whether I would go for another trek again, the answer would be a definite yes. 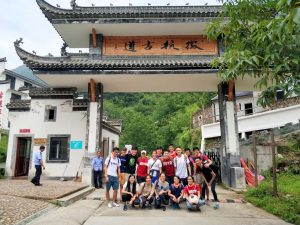 The very next day after the super tiring, DOMS-inducing (Delayed Onset Muscle Soreness) trek, we went for a theme excursion (specially organised by our prof) to 慈溪 Ci Xi for 杨梅 Chinese Bayberry picking at our TA’s family’s 杨梅果园 Chinese Bayberry Orchard. We first had lunch where we were shown a very warm-hearted hospitality, with at least 20 dishes per table (imagine eating a 20 course lunch where the food just keeps coming non-stop and all you could think of is how to tell them to stop). Since our lunch place was situated in a village, we enjoyed village fare that was their specialty, and that certain sense of familiarity brought me back to when I was living in the villages.

After lunch, we were told that we were going to ‘爬山’ to reach the Orchard. Upon hearing this, I mentally prepared myself for another ‘trek’ ahead, perhaps regretting the decision made to go for a trek the day before. But turns out, it wasn’t even a trek, nor was it even a mountain. In fact, one might even be hard pressed to call it a hill, although it was on an elevated piece of land. Berry trees decorated the entire place, and their orchard was but 1 small area of it. We were told that we could just directly eat the berries from the trees, and the darker the berries, the riper and sweeter it is. It is my first time eating anything directly from a tree, and I’ve gotta say, it is the freshest and best tasting bayberry I’ve ever eaten. It can’t get any fresher than that. It would be unfair to ask for fresher ones. And because of the rain that day, it was as if the berries were being ‘washed’ and ‘cooled’, giving that extra kick of freshness, even though it made it more troublesome to pick them. We had very much looked forward to the berry-picking and I believe we really enjoyed ourselves throughout. 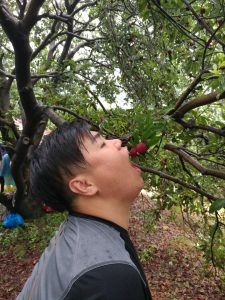