By then, we were pretty much familiar with the people of Hu Shu Special School, and similarly, they with us. The staff had wanted us to really experience what is like to be a student in Hu Shu Special School, to go through the hands-on activities the students themselves go through. Thus, they had planned for us 4 different activities: crafts, tea brewing, making desserts, cooking. I participated in the cooking activity, where we made 葱油饼 cong you bing following some online recipe. While it wasn’t michelin star grade or street side stall standard, it wasn’t that bad tasting either. The only thing was it lacked the fragrance of 葱油 cong you, and so it tasted just like any other normal 烧饼 shao bing. There were only 3 of us in that lesson, and we made so many 烧饼, we let the others try and had more than enough for our own brunch as well.

After our lunch break, it was time for us to teach the students one last thing. We wanted to teach them something fun and practical, so we taught them how to fold paper cranes (fun), as well as, paper boxes (practical). This would be our last time interacting with them, and we hope that all of them had as much fun as we did. All in all, I felt that I definitely gained more than what I had gave, because I could better appreciate what the staffs at special needs school do, and that I view these interactions as precious experiences. To me, it wasn’t so much what we planned for them, but the interaction with these children that I hope had made that little difference, even if it was but a tiny speck in the entirety of their lives. 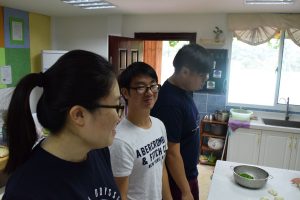 As this was my first time away from home for more than 1 month, my mum wanted to visit me and use this opportunity to visit other parts of China. Her itinerary was Nanjing to Hangzhou to Xiamen. While I wanted to visit Nanjing together with her, I had lessons and TFI-ALP activity 3 to attend, and so I waited for her to come to Hangzhou instead. As I picked her up from the high speed rail station, it was a warming sight of familiarity to be able to see my mum again after a month or so. The first thing she commented about me was that if I don’t speak, I actually blend in pretty well with the local Chinese around me. The moment I do, the accent gives it away, especially so if I use English.

After her check-in to the hotel nearby school, I brought her to somewhere nearby for lunch to let her experience a little of what I see everyday here. But because I had to rush off back to school after lunch to continue working on the assignment from ‘Design Thinking and Expression’ (which will be shared more in the 4th part of the recap), we decided to meet up again for dinner @ 外婆家 Grandma’s home, to try local Hangzhou delicacies (especially 东坡肉 Dong Po Pork, invented by famous Chinese poet 苏东坡 Su Dong Po). I then brought her to the nearby Walmart at 印象城 In Time Mall as part of the experience.

The next day, I walked with her from her hotel to ZJU Zijingang Campus, passing by the famous ‘后街 back street’ amongst SUTD ALP students (although ZJU people know it by another name). I brought her around ‘后街’ a bit before entering school. She was delighted by the cheap and filling breakfast we had at ZJU’s canteen and requested the next day breakfast to be at the canteen too. From there, we went to Xi Xi Wetland Park, as it was near school, to take a look at its natural flora. Tickets were half price (40 yuan) for senior citizens and students. In there, we were slightly disappointed by the sight as this wasn’t exactly the season for blooming flowers – most of them had either already bloomed or are going to bloom in the later part of the year. Next up, we traveled to Meijiawu tea village for lunch and expecting to visit tea plantations. True to its name, you can see tea plantations everywhere throughout the entire village. The entire village is like a hub for 龙井茶 long jing tea production, where each family either grows their own long jing tea or processes it and sells them in containers for visitors and exporting. It wasn’t my first time seeing tea plantations like these but because it’s something my mum loves visiting, I didn’t mind accompanying her at all. Thereafter, we went to 钱江新城 qian jiang New Town, which was situated near the 钱塘江 qian tang jiang (historically known as 浙江 zhe jiang, it runs through the entire province). Qian jiang New Town is like the CBD of 杭州, where there are many skyscrapers that fill the entire scenery, and they look as if they are ‘competing to be higher’ than those around, as in the nature of their businesses. And as if out of nowhere, I spotted a familiar building owned by a familiar company by chance. While I saw a ‘Raffles City Shopping Mall’ owned by Capitaland in Shanghai, I had never expected to see another one in Hangzhou itself. Dinner was back at somewhere near ZJU for handmade dumplings and street side bbq.

The following day, I suggested visiting xi hu since that is what Hangzhou is famous for. We went on a less crowded non-weekend day to avoid looking at the 人山人海 ren shan ren hai when what we really want to look at is the actual ‘山’ and ‘海’ or in this case, the scenery of the lake. Thought it might be my second time there, but I have got to say, the scenery is still quite pretty. And because we didn’t take the boats into the inner islets, we covered more ground around the outside of the lake, into parts of xi hu that I haven’t gone to before then. I could appreciate the slowed-down relaxed pace xi hu brings – like a welcome change to the fast-paced hustle and bustle of the city life; a place of refuge and a place to unwind. After our tour of xi hu, I brought my aunt to 河坊街 he fang jie to walk see walk see a.k.a jalan jalan even though I had never been there before. My initial impression of it was that the decor looked a bit like Chinatown… or was it that Chinatown was made to look like one of the China streets hmmm..? 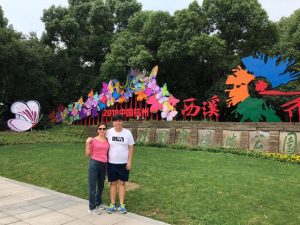 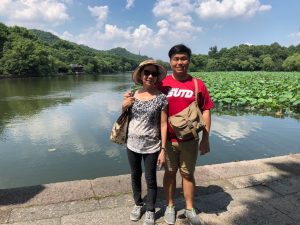 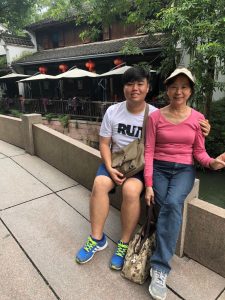