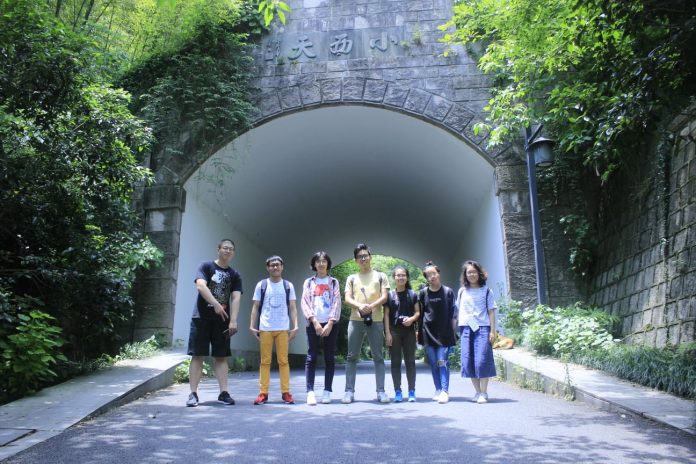 We finally had our first theme related lesson which was a lesson on how to use AutoCAD to CAD simple floorplans. It was difficult for some of us initially for we did not quite understand what the TA was trying to teach due to language barriers (lesson was mainly in Mandarin) but with some invaluable translation from our bilingual theme mates, a bit of googling here and there and more importantly some self-exploration of the software, almost everyone could CAD the given practice floorplan. It was also at that juncture that we received our first piece of assignment: to CAD out the floorplan of a famous building of our choice.

We also had our first theme field trip; we visited villages, temples and pagodas around the West Lake scenic area to gain some insights about the characteristics of traditional chinese architecture. Our first stop was to Longjing village(龙井村): the birthplace of Longjing Tea. The view from the higher lying tea plantations was truly magnificent; beneath us were tea bushes which resembled green gems laid side by side to one another, looking ahead was a picturesque view of tea houses blending flawlessly into the surrounding greenery. Adding on to the breath-taking scenery was the delicate aroma of tea; the combination of the 2 sensory elements had a soothing effect, instantly lifting one’s spirits. Heading upwards, we proceeded to visit the eighteen imperial tea bushes (十八棵御茶). Along the way, we were drawn to the architecture of the tea halls, pavilions, temples and residences; the intricate design of their roofs, pillars, windows and doors and the detailed carving patterns on them (as shown in the pictures below). 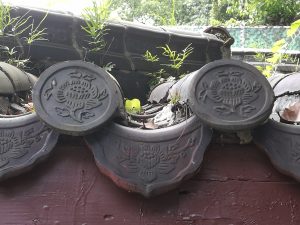 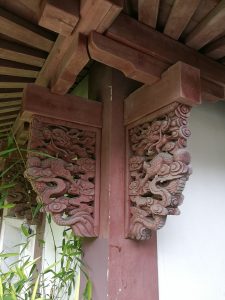 Moving on, we headed to Yongfu temple(永福寺) for more sightseeing. As prospective Architecture and Sustainable Design(ASD) students, the different types of roofs observed struck our curiosity. Almost all the roofs we saw were gabled roofs, flat roofs were a rare sight. According to our teaching assistant, the type of roof a building has is a symbol of its status. In general, buildings with sweeping roofs (roofs with upward sloping curvature at its corners) such as temples are of the highest status, followed by those with multiple-inclined roofs (roofs with two or more sections of incline) such as palaces and then by those with straight-inclined roofs (roofs with single incline without the upward curvature) such as commoner residences. Another way to gauge the status of a building is by looking at the carving patterns on the roof; those with more elaborate carving patterns such as dragons are of a higher status. Since we were in the vicinity, we decided to also explore the other temples such as Lingyin temple(灵隐寺). It was interesting to note that contrary to popular belief, not all pillars of a building act as its support; some pillars are there for aesthetic purpose rather than structural support.

Continuing our journey, we advanced to Liuhe Pagoda(六和塔), our final destination for the day. Liuhe Pagoda stands at a height of 60 metres; with an appearance of a thirteen-storey structure but in fact only having seven stories within. Connecting each floor is a spiral staircase; it was interesting to note that different flights of stairs were made of different materials, some were made of stone, some were made of marble, some were made of cement and some were made of timber. Carvings and painted figures that have withstood the test of time could be seen on the walls and ceilings of the pagoda. The flooring and walls of the outer corridor were made of timber. Gazing through the windows of the pagoda, one could admire the scenic Hangzhou skyline. Early pagodas started out square-based and circular-based but as time progressed, they evolved to the familiar octagonal-based pagodas that we see today.

That’s all from us this week. Can’t wait for our next field trip!!!