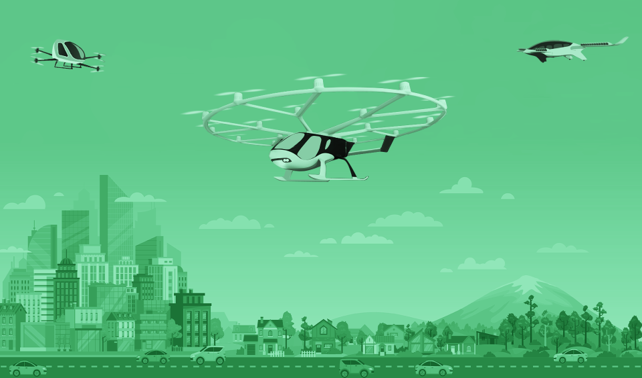 With the opening of borders and the return of leisure and business travel, the aviation sector is finally seeing its long-awaited revival. That said, a number of talking points surrounding the aviation industry have been surfacing in recent months, one of which is the rise and impact of Advanced Air Mobility (AAM).

For the uninitiated, AAM relates to new, disruptive technology that seeks to create fully-automated aircraft (think self-flying aircraft and the like). Of course, moving towards an autonomous, machine-centric future is intimidating in more ways than one, so if the thought of hopping into a pilotless aircraft scares you, you’re not alone.

While there has been a lot of research and experimentation done in this area, most, if not all of such AAM aircraft have yet to be fully autonomous, and those that have shown an ability to operate without pilots onboard are still considered experimental. Thus, they are not yet certified for commercial passenger transport operations, although some manufacturers have embarked on this long certification journey, albeit for vehicles with pilots still onboard.

Aside from this, another large part of aviation that will need to change to accommodate autonomous AAM aircraft is the human-centric Air Traffic Management (ATM). 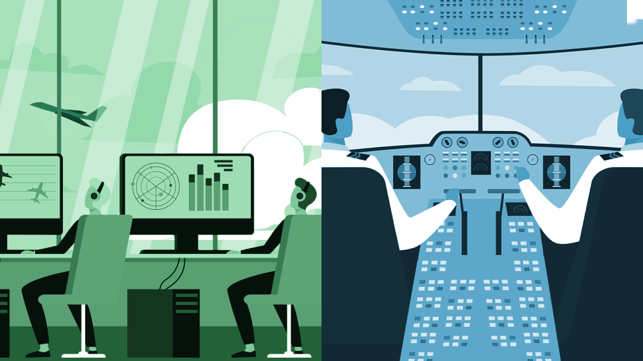 Currently, air traffic controllers and pilots use digital systems to support their decision making. Autonomous aircraft have their own decision-making capabilities, and thus represent a paradigm shift for the industry.

That said, the question that we seek to explore here is what kind of disruption AAM will bring to the aviation sector. To tackle this, we sat down with Jamie Bloomfield, Lead of Translational Research and Industry Engagement at the Aviation Studies Institute, to pick his brain on the issue. From potential clashes between tradition and technology to communicating with Artificial Intelligence (AI), here’s Jamie’s take on the big topic.

It’s hard to say with certainty today, since the industry is still relatively nascent, but a lot of money has been invested in this area in recent years.

Around three or four years ago, there was a big focus on small Unmanned Aerial Systems (UAS) for delivery services and UAS Traffic Management (UTM)—the infrastructure to support them. Whilst some of the companies have continued to progress, many have ceased because some early movers pushed the technology forward faster than the market developed.

Today’s focus has shifted onto larger, passenger carrying vehicles, which are now known as AAM. We are seeing more efforts to prove the operational viability and airworthiness of these aircraft, and these activities hint at the potential markets the technology will open. Unlike the earlier small UAS (sUAS), the companies behind larger autonomous aircraft tend to involve expertise from traditional aircraft manufacturing companies, either through partnerships or directly through investments. This demonstrates a shift—a recognition that the technology adoption needs to conform to existing aviation standards in order for their operations to be sustainable.

We have also started seeing potential operators—mostly existing airlines—make non-binding promises to buy these aircraft if certain conditions are met. 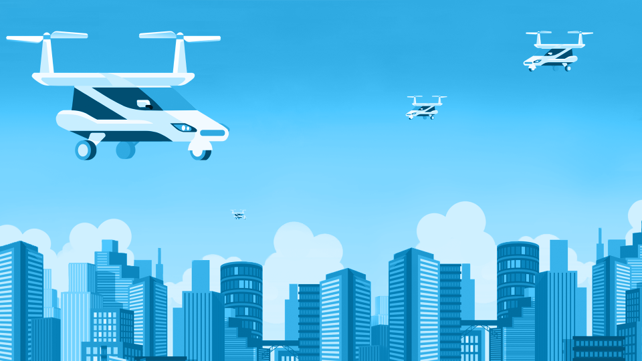 UAS were initially used for transporting cargo and carrying out inspections, but the autonomous aircraft being developed now are larger and capable of carrying passengers.

Just like with the earlier sUAS and UTM markets, the question of longer-term financial viability remains. There is also a question about whether the eventual market will become too saturated. The one thing that’s clear though is that the traditional aviation industry is actively looking for ways to decarbonise, and electric aircraft are a potential avenue to achieve this, at least on paper. The ability to mitigate future carbon taxes creates a business case that sUAS did not benefit from.

As mentioned, we have begun to see airlines and aircraft lessors make orders for passenger-carrying AAM aircraft. For example, in early 2021, United Airlines ordered up to 200 Archer Midnight aircraft, an all-electric vertical takeoff and landing (eVTOL) aircraft, and in August this year, they made a USD$10M pre-delivery payment for the first 100.

In June 2021, aircraft lessor Avolon similarly ordered 500 VX4 eVTOL aircrafts from Vertical Aerospace. It made subsequent announcements about leasing agreements that it reached with various airlines, including at the last Singapore Airshow in February 2022, where it agreed to lease 200 of the VX4s to AirAsia Aviation.

Though these are positive signs, it should be remembered that such aircraft remain developmental, and that some of these announcements could have been influenced by strategic business decisions and marketing tactics.

United Airlines, for instance, is an early investor in Archer Aviation, and Dómhnal Slattery, the CEO of Avolon, is also the non-executive chairman of the board at Vertical Aerospace. Exactly how much commitment comes with an order of these aircraft is not publicly known. It is also unclear how much these types of airline investments are based upon a need to demonstrate to shareholders an effort to reduce carbon emissions. That said, there is a risk that AAM could end up like its predecessors, i.e. sUAS and UTM. However, the existence of some form of business case remains encouraging as long as the technology continues to progress. 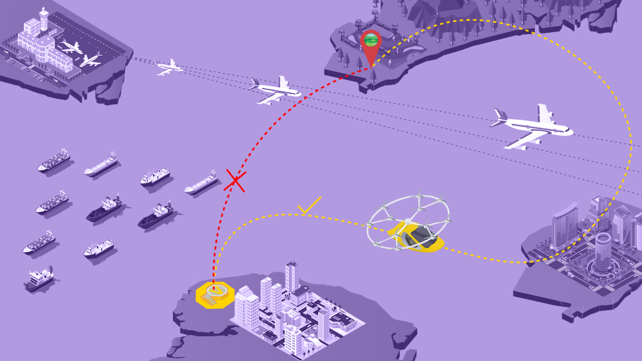 One of the predicted challenges in integrating AAMs and human-centric ATMs is that there might be a clash of use cases between the two. For instance, if an AAM vehicle were to operate from Singapore to Bintan, Indonesia, a direct routing (in red) might cross the arrival and departure paths of traffic at Changi Airport. An indirect routing (in yellow) could avoid that interaction, but it might also inhibit its efficiency, which is the main objective of introducing AAMs.

Human-centric ATM is organised in a structured manner, with standards that have been harmonised across the world. The process of standardisation and harmonisation slows down development, but also ensures consistency and interoperability on a global level.

By its nature, AAM challenges the status quo. Whilst it tries to adhere to existing aviation standards, there will be occasions where these standards clash with automated systems, or the AAM use cases. This creates challenges for airspace managers who have to apply exceptions to the norm, and for the global aviation community as a whole to review, gradually agree upon, and eventually revise said standards.

Fundamentally though, the main challenges come down to a clash of use cases, and the need for both humans and machines to communicate, coordinate and negotiate. 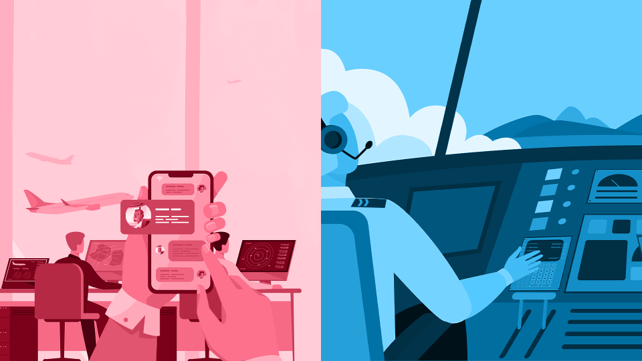 One of the benefits of digital communication between pilots and controllers is a reduced chance of miscommunication arising from different accents, radio interference, and background noise.

Whilst today’s ATM technology does permit a form of digital communication between air traffic controllers and pilots, it is limited in scope and capacity. It is perhaps best approximated as a form of text messaging. Controllers send pilots digital messages, and pilots respond by reviewing these requests, and when acceptable, programming the aircraft’s flight systems accordingly. A short message confirming that the request has been received and acted on is sent by the pilot to controllers, but the systems are not designed for detailed negotiations outside of this scope.

Some stakeholders in the AAM industry have indicated an expectation to manage their own traffic or fleet operations. The likelihood of this remains debatable as the Air Navigation Service Providers are the ones holding the keys, but the AAM industry could benefit a lot from the ATM industry’s extensive knowledge in safety management. Though human-centric, the philosophies, concepts, and culture of the ATM industry are transferrable and applicable to many industries, particularly where the machines are being created by humans, like in the AAM industry.

Though they’re still in the relatively early stages of testing and development, various designs of AAM aircraft have been unveiled. (L to R) EHang’s Air Taxi, Volocopter’s VoloCity, and the Lilium Jet are but some of the many AAM aircraft in the market.

There are also complementary opportunities for AAM to benefit ATM. ATM has a roadmap of capabilities it needs to achieve to create its vision for a global operating concept. The emergence of AAM could help ATM by driving the development of new technological solutions, while ATM could offer AAM capabilities and concepts that help with stakeholder acceptance and eventual integration.

Personally, I struggle to see an ATM system that doesn’t involve humans in some manner, at least in my lifetime. The very nature of ATM’s purpose is safety, and the unpredictability of the natural environment in which it seeks to provide this means that a certain level of resilience and flexibility is required, of which humans are more equipped to handle than machines are at the moment. Roles may change, and some tasks carried out by human controllers might become automated, but there will still be a need for human supervision so that someone can intervene in a timely manner when the system needs help. I will say though that humans’ resistance to change is a barrier in itself, so perhaps this is where the AAM industry can take the lead.

Communication alone is not the issue; it is the combination of the Human-Machine interface with the envisaged AAM use case of high frequency, on-demand operations between ever-changing origins and destinations. I don’t personally think we will see this use case materialise in the near future, or possibly ever. Instead, I believe that some other variation will emerge, though there will still be a need for humans and machines to interact, and to do so in ways that improve overall capacity whilst maintaining safety and efficiency, rather than being detrimental to them.

Another key aspect is that ATM relies on collaboration and cooperation between stakeholders. Unless we expect a world in which machines are in charge of governance, we need people to interact, build relationships and trust. This is difficult to replicate with machines.

Machine-based decisions tend to be quantitative, whilst ATM needs to meet a combination of quantitative and qualitative requirements. It is not too difficult to imagine two machines negotiating with one another. Yet, it is hard to imagine a collection of different human stakeholders accepting an AI-derived settlement when they each have different operational goals, and especially when the AI is seen as a black-box.

When it comes to communication, what remains unknown is whether humans can keep pace with the demand and complexity that the AAM industry is envisioning, especially when air traffic gets busier too.

At the end of the day, I hope that the technological developments needed to support AAM will support the capabilities of ATM and vice versa. I believe that the industry needs to become more diverse, and more focused on supporting a range of airspace users with different needs and objectives. This is only possible through collaboration, where the different needs of various stakeholders are accommodated in ways that are more efficient—not just for each user, but also for the overall airspace network.