For 49 out of the 58 students under DATE, this is their second week in China.

But for me and 8 other students who were involved in SUTD Orientation, we arrived in Hang Zhou a week later. Orientation week was physically draining for all of us and it left me dis-ORIENTation-ed (hehe) upon arriving at the airport. I had spent the entire duration of the 5-hour-long flight sound asleep and coupled with my hoarse voice, I was literally and figuratively speechless when I saw how big and beautiful the ZJU campus is! The Delayed Group tried our very first local street snack at a nearby food street near the hostel. We tried the 鸡排, which tasted odd as the texture was similar to that of a jelly and ordered 牛肉面 at a noodles stall, which was warm and tasted like comfort food. We head back to the hostel to rest for the night.

Early in the morning the next day, there was a DATE OPENING at Yueya Building to officially start the exchange program. There were buddy-sharing and we were allocated our workplaces. Also, I finally met my theme instructor and TAs, who were kind and friendly.

It was a relaxing day as we ended the activities around lunchtime. We decided to explore the campus, walked through 南華園, which is a breathtaking park with Chinese-themed structures and a lake with black swans and geese enclosures. Bought our first brown sugar boba bubble milk, without the tea, at 七号 shop and it tasted great and refreshing!

For dinner, we went to search for a halal restaurant to dine in and found a quaint cafe that serves vegetarian food. Not only was the zen ambiance very soothing, the staff were absolutely hospitable as well. The owner encouraged us to have a try at Chinese calligraphy and explained to us the history of how some Chinese characters come about. Little did we know, the word 帝 , meaning ’emperor’ in 上帝, was derived from a drawing of a tree protected by walls and a roof, depicting an image of a secure and safe dwelling, and if you take away the walls and roof, all that is left becomes 不, meaning ‘no’. It was an insightful and interesting experience and the owner even asked for a selfie with us. Subsequently, we bought 鸡排 again at another store and it was finger-licking good, and the best thing is its cheap price – 12 元, making it satisfying for both our stomachs and our wallets! 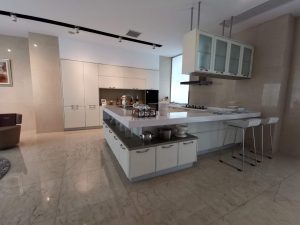 The next day, we had a culture experience activity to Ningbo Fotile Kitchen Ware Co.,Ltd. It was an eye-opening experience as it has given me the opportunity to witness how advanced technology and smart design can complement each other in creating modern and practical kitchenware designs. I am especially amazed at the automated and space-maximising kitchen cabinets and drawers, which are especially applicable in Singapore HDB kitchens. The trip took up the whole day as the company is located far from the campus – so far that our highway actually leads to ShangHai as well. Video of Kitchen Ventilation Video of Automated Cabinets

The best China experience won’t be complete without eating hotpot, and so that was what we had for dinner! 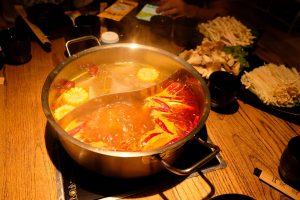 We had 2 soup bases – spicy and non-spicy, to cater to some people’s embarrassingly low spicyness tolerance level (lol). Famished and exhausted, we ended up ordering way too many noodles and mushroom to the point it was more like a buffet hotpot. It was an enjoyable dinner and we ate to our heart’s content, but I guess looking at the weighing scale won’t be so enjoyable haha.

On Wednesday, 22nd May, we decided to visit the famous scenic place 西湖. The internet has been pointing us to the lake at every mention of ‘Hang Zhou tourist spots’ and I guess now I understand why. It has an area of 3,322.88 ha, with numerous temples, pagodas, gardens, and artificial islands within the lake, and was made a UNESCO World Heritage Site in 2011. The photos don’t do justice to the lake as it was utterly mesmerizing, with instagram-worthy spots every 10 metres or so. The lush greenery doesn’t only beautify the path, but it also provides cool shade to compensate for the sweltering hot weather. We visited the LeiFeng Pagoda, which costs 20元 (student price). Inside the Pagoda, there are wooden statues depicting the scenes from the legend of the white snake, while outside the Pagoda, the view at the top was absolutely dazzling, a 360 degrees unobscured spectacle of the West Lake, as well as forests, temples and skyscrapers. 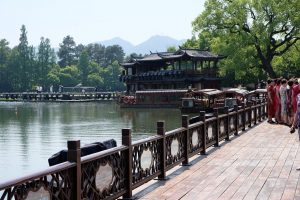 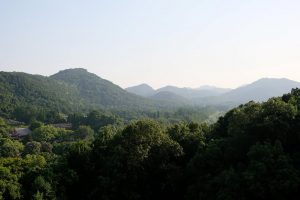 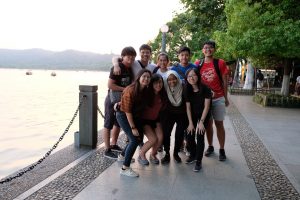 Recommended by our friends, we went to watch the Light Show at 7pm near the Grand Hyatt Hotel. The tourist area was full of high-end retail malls and beautiful street lights. The Light Show features an array of colourful lights, combined with the swift motions of the water fountains and accompanied by sweet melodies of the music, making it memorable and enjoyable. I was so struck by the amazing performance that 15 minutes went by in a blink of an eye. We ate at a halal Mediterranean restaurant for dinner, which actually sells fusion dishes and even Szechuan-style culinary!

We had our first Design Thinking and Expression Course lecture and lab on Origami Robot on Thursday. It was challenging yet exciting to fold the complicated origami and finding suitable expressions for the origami. Then, we had to code the arduino to control myservo motors such that they can be attached to the origami to give them expressions. We had a lot of fun coming up with new and hilarious motor movements to animate our origami. 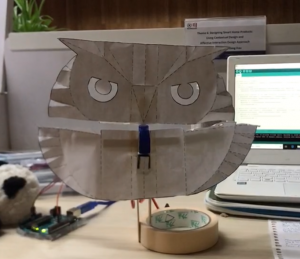 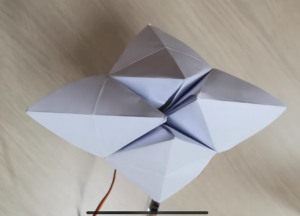 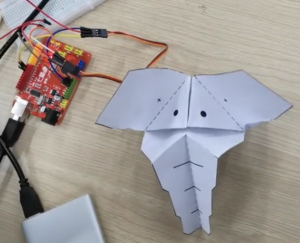 The next day, we had a tour of ZJU history exhibition and ZJU science and technology exhibition. It was an interesting tour and we learned a lot about how ZJU developed into the big university it is today, as well as the various impressive inventions that ZJU has designed and produced. At night, we went to sing karaoke at InLove Ktv in INCITY mall near the ZJU campus and it was totally worth it as we only spent around 40元 each for 4 hours of singing time and 24 complimentary drinks. We sang both English and Chinese songs to our heart’s content, despite our voices still recovering from orientation.