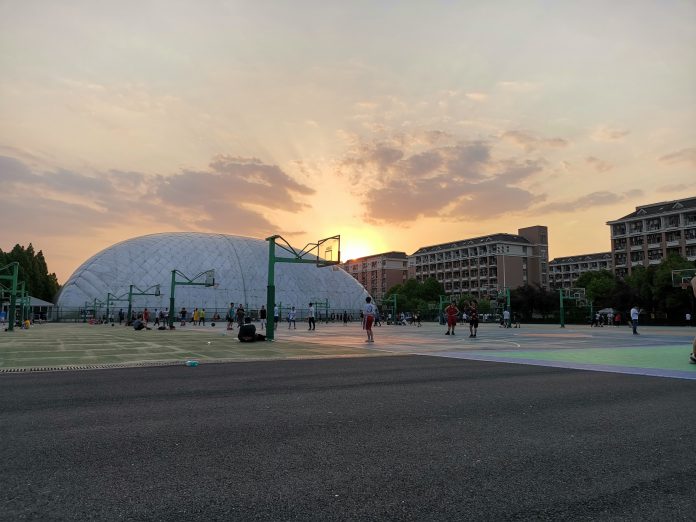 As I reach the end of my second week at DATE 2019, it’s become clear that the fun part is already slowly creeping away, and that the tough times are quickly settling in and making themselves at home. Project deadlines are approaching with surprising voracity.

There is something I should mention before I continue: if you choose to come to DATE and are not a native Chinese speaker, you will absolutely face some difficulties. Before coming over, I’d been given the impression that all lessons would be conducted in English; however, this is not true. Even as a reasonably competent conversational speaker, it’s been a struggle following along with the lessons and instructions, which are in fact primarily in Chinese.

Of course, it’s still possible to survive over here (there are a few amongst us who do not speak Chinese at all) even without a strong background in Chinese. There is a ‘Mandarin + simple English translation’ lab class (which I was not fortunate enough to be included in) for those who are not strong Chinese speakers, but, as the class name suggests, it’s still mainly in Chinese. There is also no such separate class for the lectures. At any rate, I can’t help but doubt the effectiveness of classes which can’t be understood by most of the students.

Communication problems aside, it’s been a pretty hectic week for me. Despite the incoming barrage of deadlines, I was able to start the week off with a rather spontaneous early morning visit to 宝石山 (literally: Precious Stone Mountain), a short ‘mountain’ (more of a hill) located on the north edge of West Lake (西湖). We started making our way up at about 4 a.m., and managed to reach the top in time to see the sunrise (at 4:59 a.m.). 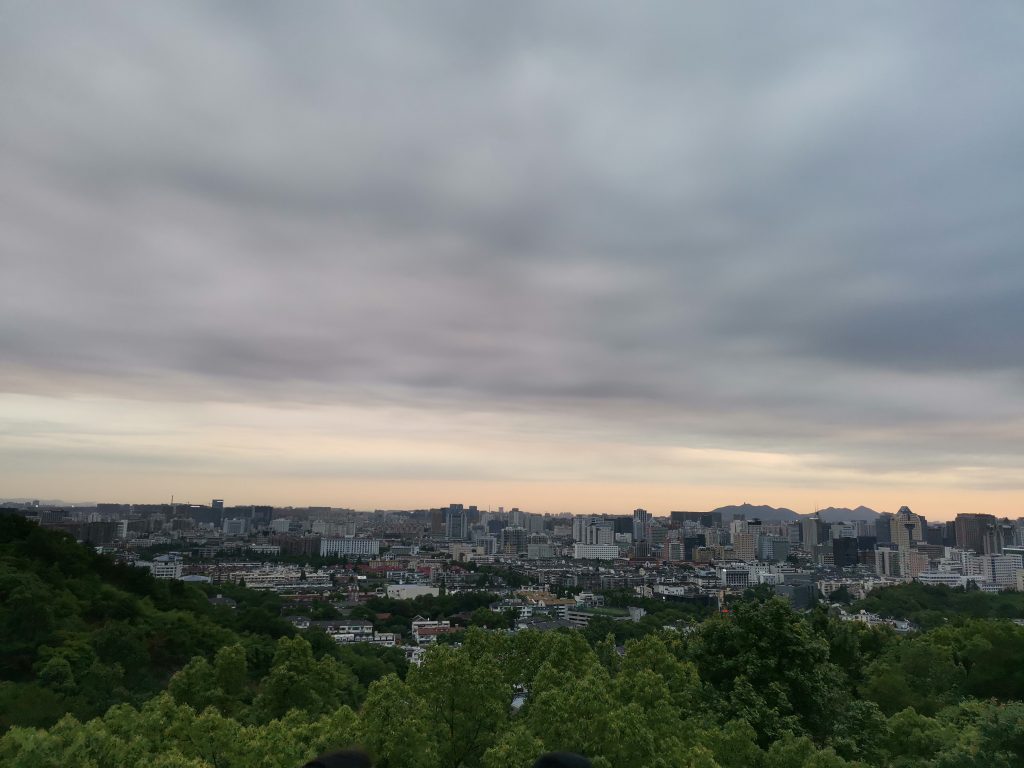 Unfortunately, the ‘sunrise’ was a little underwhelming due to the cloud cover, although we were still rewarded with a pretty good view of the scenery.

Afterwards, I went for my third cultural experience visit to Zhejiang Geely Holding Group, an automobile manufacturer. Despite one of the largest auto companies in the world, this was surprisingly the first time that I heard about them. 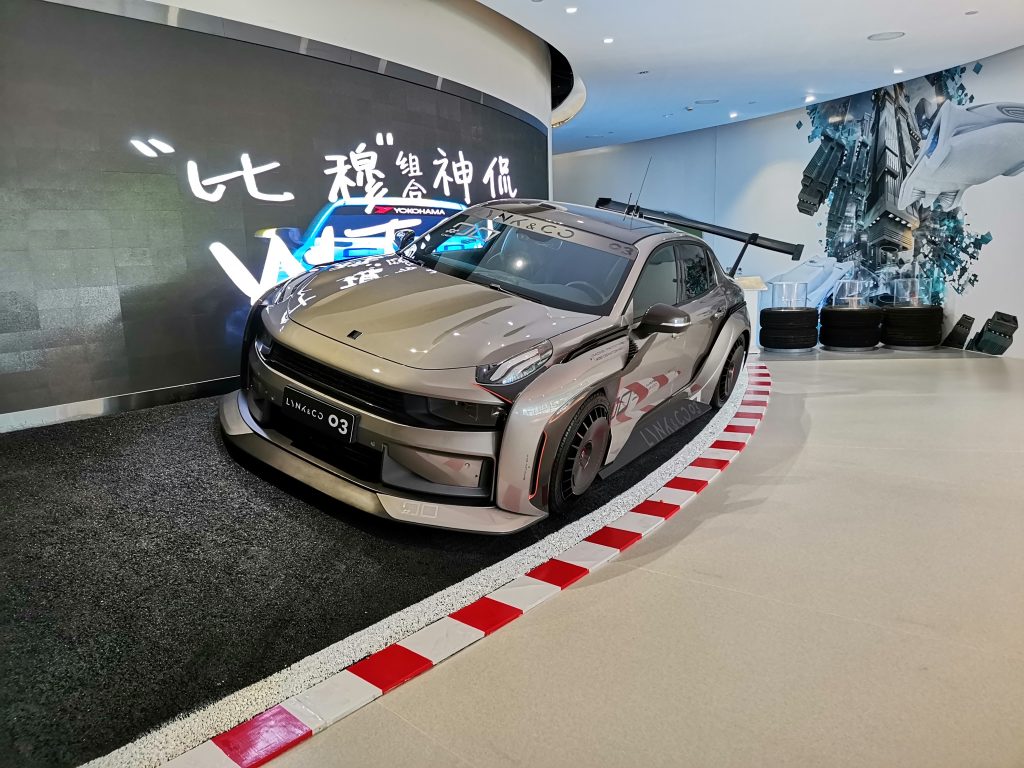 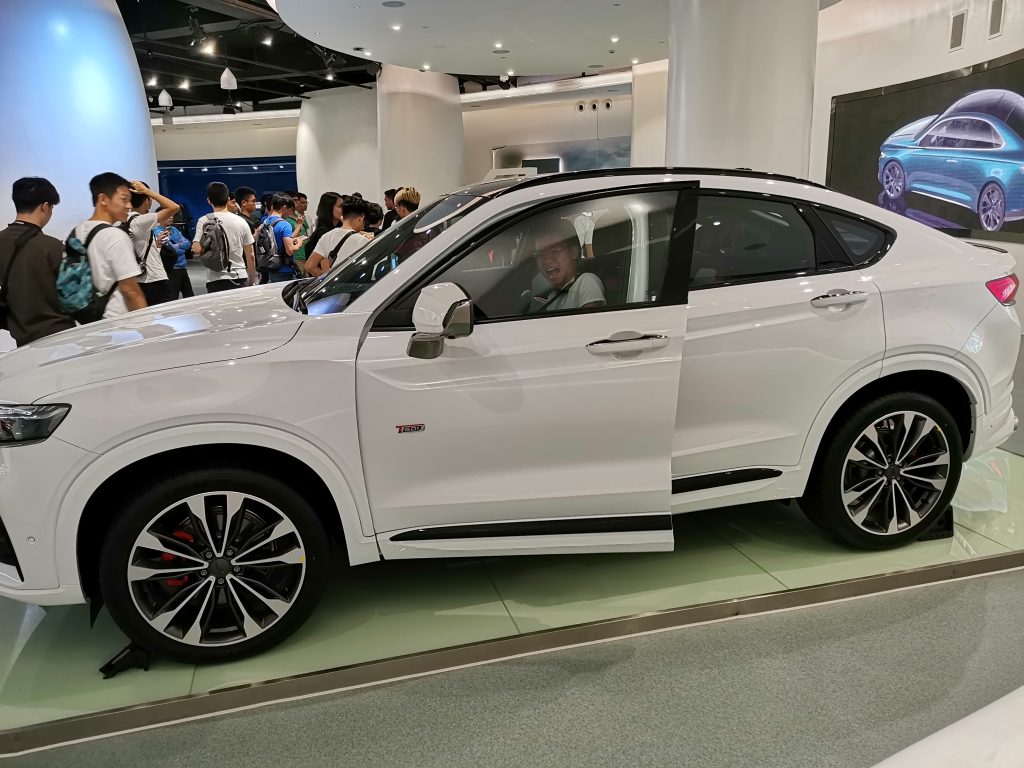 On Wednesday, I went for the second visit to Hanghzou Hu Shu School. For this visit, we planned to teach the children some of the basics of Ultimate Frisbee. However, things didn’t quite go according to plan. It was a rather challenging visit as the children were of a lower age group (10 – 13), and had a much shorter attention span as well as being somewhat uncooperative at times. Although we had planned to begin the Frisbee session as soon as we started, we ended up spending the first hour in their classrooms with them due to some scheduling matters. During this time, the kids were very restless, and we were not particularly successful at engaging with them (at some point, we tried to teach them some basic English).

Fortunately, after moving on to the Frisbee segment, we were able to engage them physically, and they became much more interested and active. To be honest, I had planned this session with the hope that we would be able to impart some of the positive values of Ultimate Frisbee to the children, and aimed to close off by allowing them to play a proper match. However, all of this quickly went out of the window. As soon as they split up and started doing their own throwing with the discs, it became impossible to get their attention back. Instead, we ended up going around and throwing/playing with the children for the rest of the session. 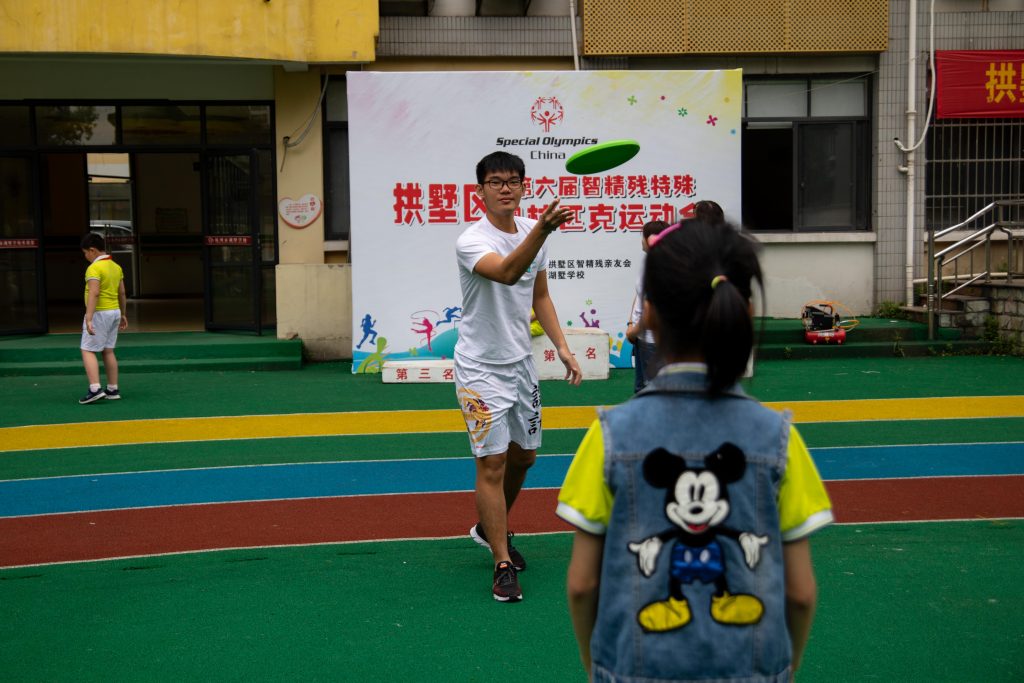 There were two particularly memorable children who I got to interact with during the session. The first was a girl who didn’t speak a single word to me, instead preferring to communicate through grunts. I initially thought that her grunts were to convey her disapproval for the activity, but eventually realized that she was, in fact, excited and having fun, and that that was her way of expressing it. The other was a boy who was extremely enthusiastic about Frisbee, to the point that he kept asking me to teach him new throws, and even elected to keep throwing with me even throughout their break. Despite not being able to carry out the program as was planned, I think this was still a pretty successful session. We were able to bring enjoyment to the children, and that is ultimately what matters. 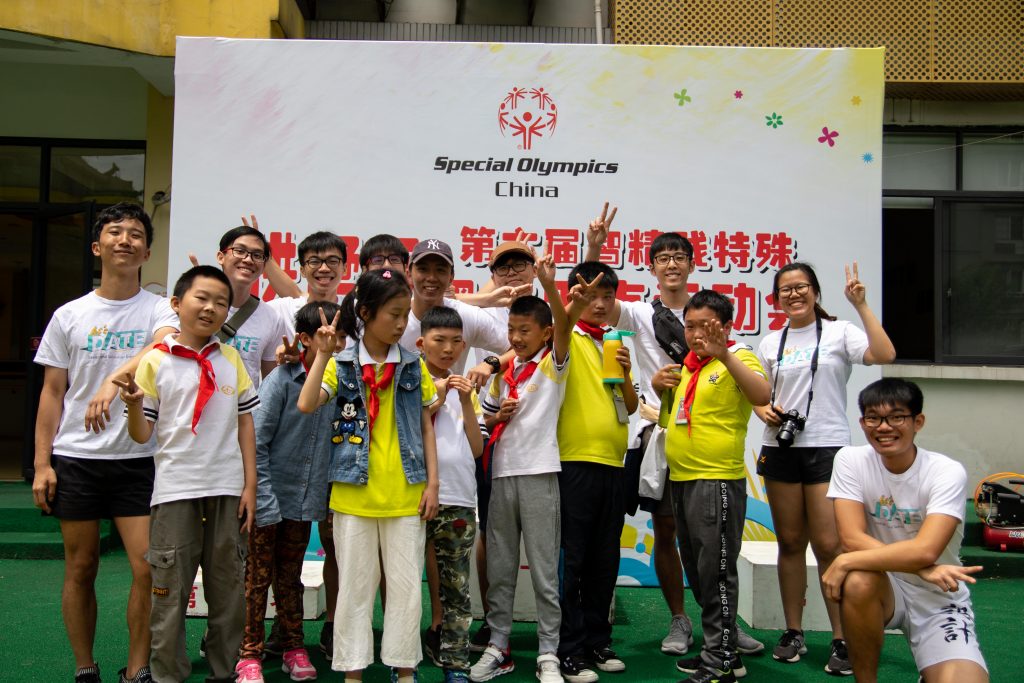 After the session at Hangzhou Hu Shu School, I went out with some friends for some ‘exploration’. We went to the Wushan Scenic Area (吴山景区), where I was treated to what is so far the best view I’ve seen in Hangzhou (the pictures really don’t do the place justice; it’s truly a magnificent sight, and the hike up was definitely worth it). 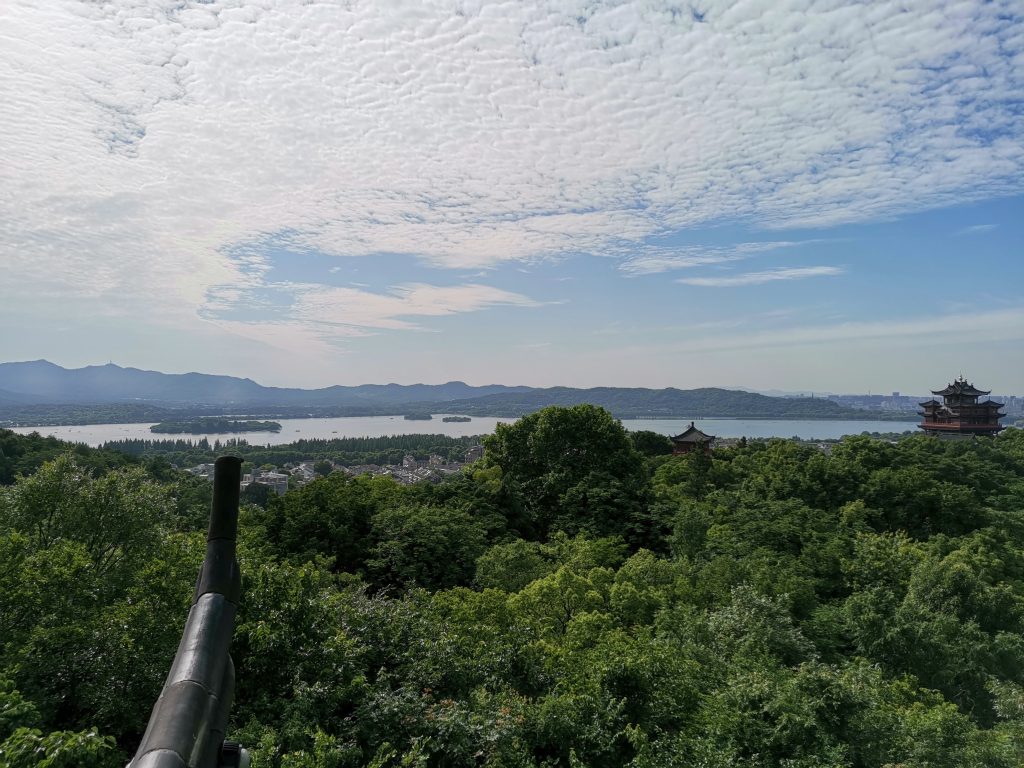 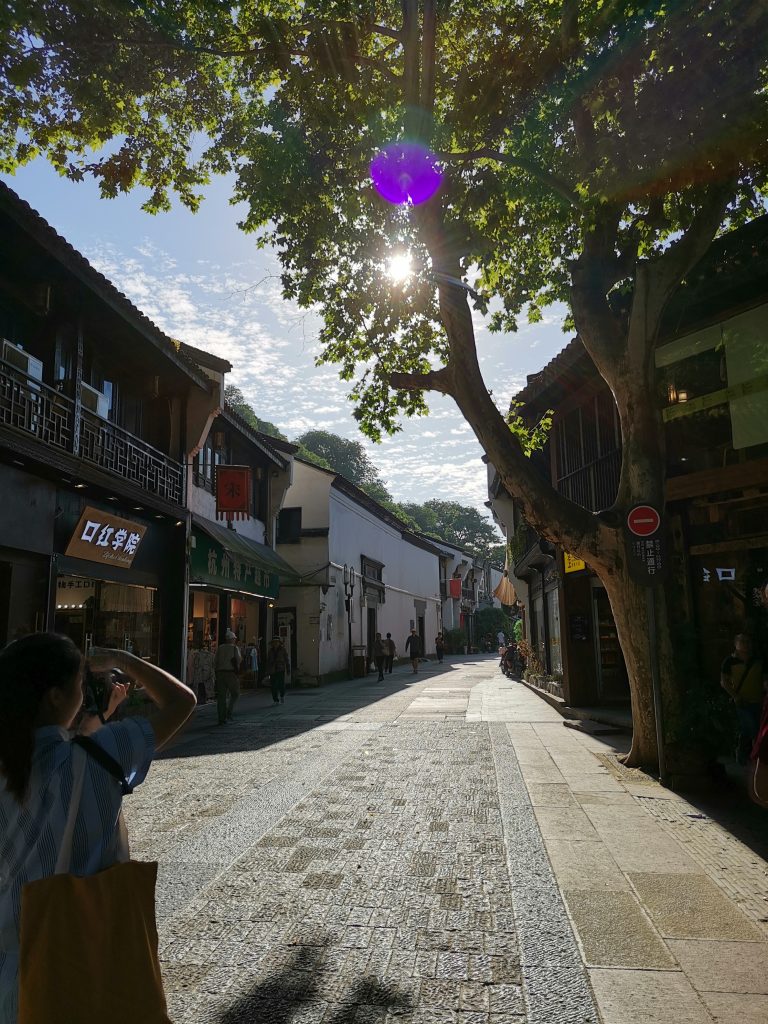 Afterwards, we went to a night market (夜市) nearby to get a taste of the local culture.

To close off the week, I paid a visit to the Hangzhou Future Life Expo 2019 with my theme mates. In all honesty, it was somewhat underwhelming. There were a few interesting exhibits here and there, but I had the impression that the expo served mainly as a space for companies to advertise their products to the public. 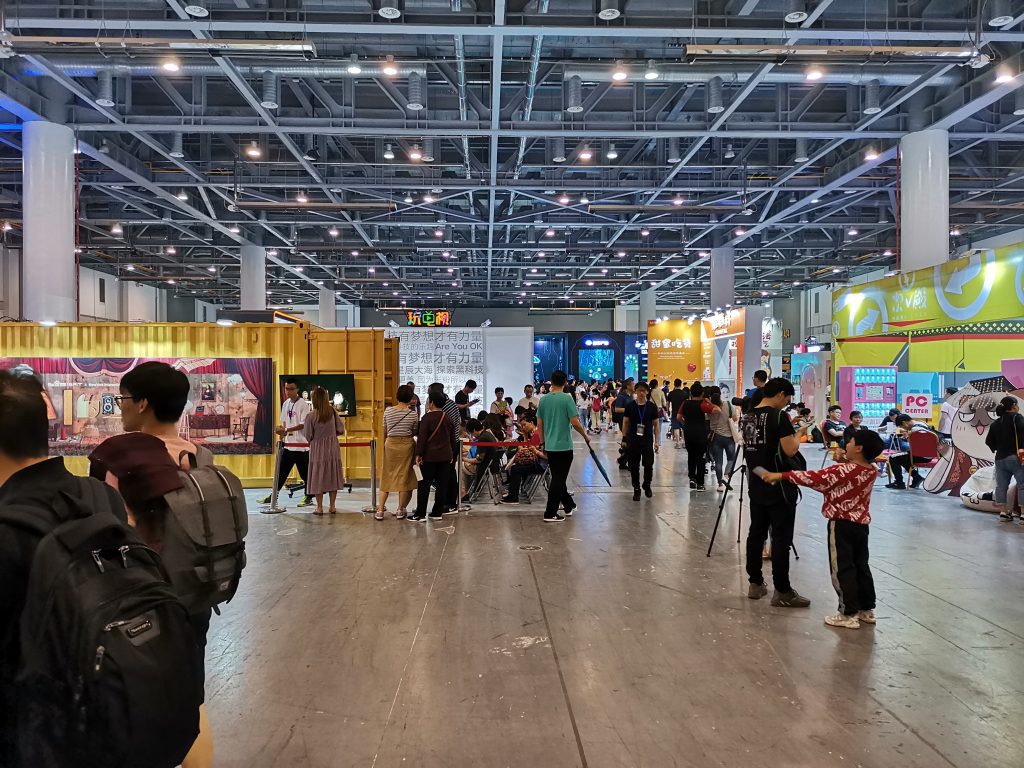 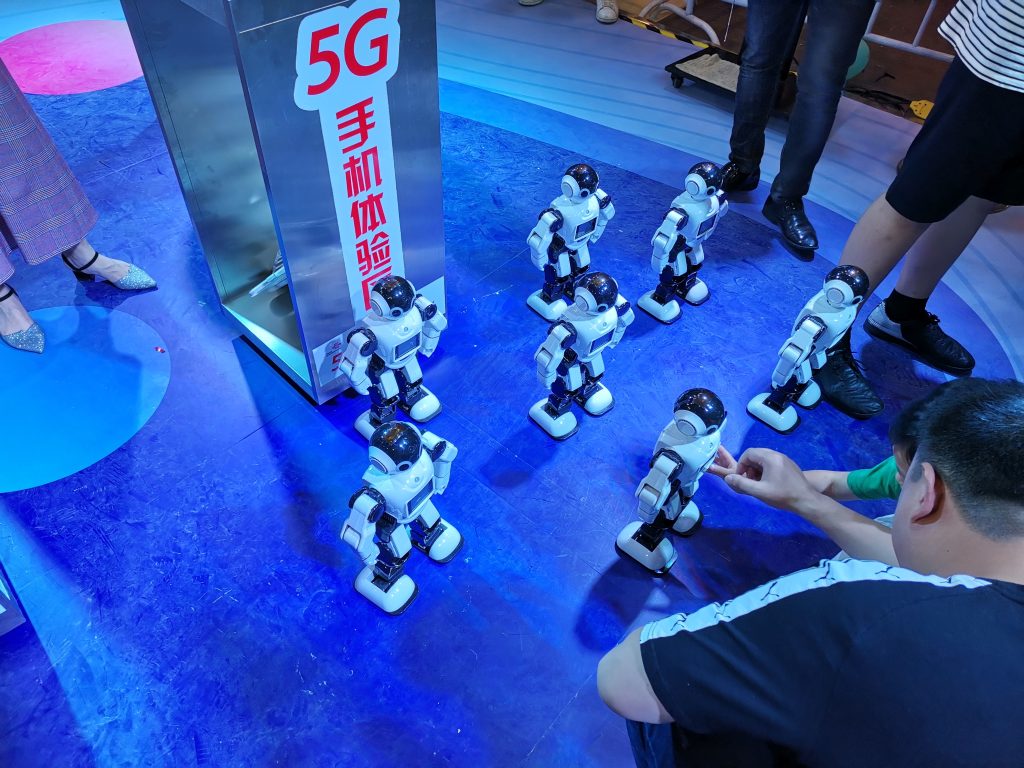 And that about sums up my second week in Hangzhou. I haven’t really had the opportunity to see some of the more distant sights, such as 乌镇 (a Chinese water town) and 龙井村 (a tea plantation) so far (the furthest I’ve went at the moment is West Lake, discounting the visit to Ningbo Fotile Kitchenware), but hopefully that’ll change in the next week or so before the hard part really begins.