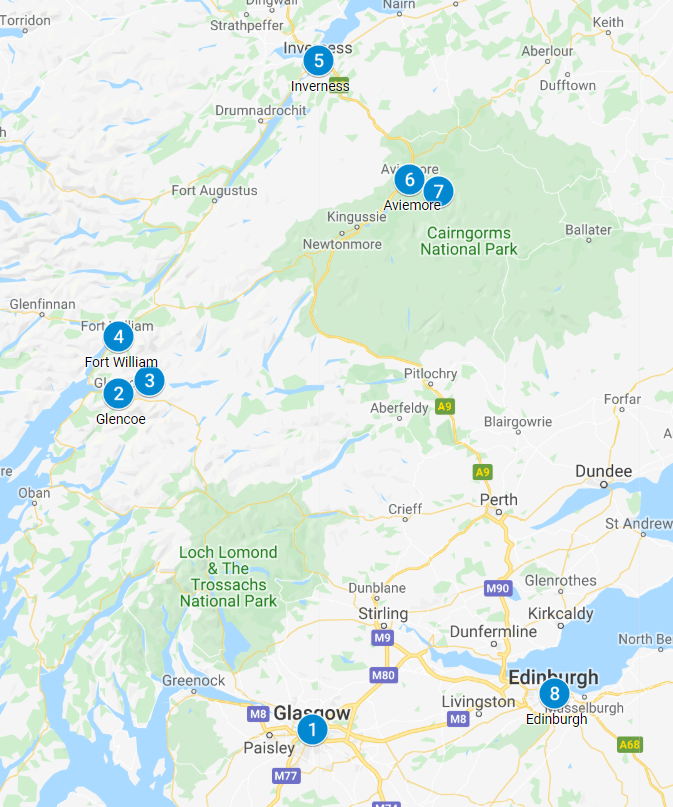 We went to a grand total of 8 different locations altogether in Scotland, which, looking back, is a little crazy.

I ran out of lab the Friday right before reading week and took the train up to Glasgow (#1 on the map). We stayed in Glasgow for a couple of days, caught a gig (Snarky Puppy!), then took a bus up to Glencoe (#2). After a night in Glencoe we took a bus to Kinlochleven (#3) and hiked 24km on the West Highland Way to Fort William (#4). From there we took a bus to Inverness (#5), then to Aviemore (#6), and then one more bus to Glenmore (#7). In Glenmore we saw some free-ranging reindeers, then headed back to Glenmore before taking the train down to Edinburgh (#8).

Wow, that was a long ride (and a long read).

Glasgow and Edinburgh were definitely pretty, but my favorite memories from the trip are all from the Scottish highlands. I went there at the start of winter in mid-November, when the frost had just begun to form on the surface of blades of grass and when the puddles on the trails had frozen into ice which sparkled in the sunlight. The Scottish moorland is, without a doubt, one of the breathtaking sights I’ve ever seen.

It really is one of a kind – you won’t see places like the Scottish Highlands in most of continental Europe. While the mountain ranges in Europe are stunning in their own right, there’s just that something about the vastness of the mountains and glens in the Highlands that I can’t put in words (hence, something). It might also be because I spent too much time reading works by the Bronte sisters in high school, and seeing the moors in real life gives a whole new depth to the stories and the characters. Romantic literature aside, this is one of those places I’d love to visit again; I’ve heard that the Highlands are covered in wildflowers in the warmer months, and that sounds like a whole different kind of beautiful.

Alright, I’m gonna stop marveling about the moors and move on to other cool Scottish things. I got to try haggis in Glasgow, which was an interesting experience. For the unacquainted, haggis is made of sheep’s lung, liver and heart, mixed with spices and salt and then encased and cooked in its stomach. It seems really dubious, but it really is a lot more palatable than it sounds.

Glasgow and Edinburgh have their own landmarks too – the Necropolis in Glasgow and the Edinburgh Castle in Edinburgh (duh) are iconic and pretty majestic too.