After a busy week packed with take home assignments and intense revision for our upcoming Algorithms midterm, we decided to let loose over the weekend, and relax a little by going out on both Friday and Saturday. As we were busy studying throughout the week, we did not have time to plan for a longer road trip, thus, we settled for a day trip to San Francisco on Friday and a pre-arranged trip to Six Flags Discovery Kingdom on Saturday.

San Francisco has a lot to offer, however, this being our third trip down, we wanted to explore areas that we had yet to explore, and were more off the beaten track. We started the day off at Mission District an area with Latino roots, famed for its taquerias and hipster vibes. One of the things that many travel guides suggested for the Mission District, is to get a giant burrito, thus, we set off for Taqueria Cancun (although almost any other taqueria serves as good a burrito because they are just so authentic). Stepping into the taqueria, it was like we were transported to Mexico, what with the authentic décor, chefs yelling in Mexican, and even a live busker. While we did order a giant burrito, we were not ready for how big it really is. Thank goodness we only ordered one, as it comfortably fed the four of us! As expected, the taste was truly exquisite, and it was super affordable as well, coming in at around 10USD!

Having consumed the massive burrito, we decided to keep exploring the Mission to burn off some calories. The district was quite quaint with plenty of street art, indie shops selling trinkets and clothing, thrift stores, and trendy eateries. While exploring, we chanced upon Tartine Bakery.

It had such delectable looking sweet treats, we decided to get some because no meal is complete without dessert! Tartine bakery is famed for its banana tart, so we got that and a lemon tart, and headed to another notable attraction in the district, the Dolores Mission Park, to enjoy the lovely weather and our desserts.

After the Mission, we went to see the Painted Ladies, a San Francisco icon. It is basically a row of cute, colourful Victorian / Edwardian houses.

In the vicinity, is the Haight-Ashbury district, which is known for its thrift stores. Thus, we took a gander to see what the thrifting scene is about. If you want to get branded apparel, this is the place to go! There was large selection, arranged by size. Although they are not the cheapest, prices are significantly marked down, and apparel is in very good condition. If you are lucky, you may even find some hidden gems!

As the sun began to set, the thrift stores closed up as well, so we headed to Barker Beach, one of two recommended viewpoints for the Golden Gate Bridge. Unfortunately, it was a pretty gloomy and cloudy day, so we didn’t manage to get very good pictures of the bridge.

To quell our disappointment, we had Korean (Um Ma Son) for dinner nearby. The shop is single-handedly run by this ajumma. She does the cooking, cleaning, ordering and everything on her own which is astounding considering the service was still efficient and quick! The food was also excellent, and felt like it was cooked with love. If you are ever in need of late night food in San Francisco, this is the place to go, as she opens till midnight.

The next day, we headed down to Six Flags Discovery Kingdom. One of San Francisco’s more adored amusement parks, Discovery Kingdom features not only its thrill rides, but animal attractions and encounters as well. Together with the other SUTD-Stanford students, we booked our tickets prior to our visit so that we enjoyed only the best promotional deal for bigger groups.

Bright and early, we set off for the amusement park that was a 1.5hour drive away. In a stunning turn of events, we arrived early, just a few minutes before the official park opening hour. After clearing security checks, we planned our route around the park. We decided to test the waters first with a kids-friendly thrill/rollercoaster ride – Cobra. While we queued for the ride, we watched young children before us buzzing about other rides like the Medusa and Batman, which were infamous/notorious for their height, speed, inversions and steepness. We were simply bewildered and put to shame by how much of a thrill-seeker these children were despite their young age. At the same time, we were worried to have chosen the same ride as them. Thankfully, Cobra was enjoyable. This serpent-like train took us for a breezy ride at 22 miles per hour.

In between visiting animal enclosures and watching animal shows that featured exotic species like the tiger, we taunted each other to take the rides that we would have otherwise not taken if not for peer pressure. The most memorable one was Medusa. At 3,937 feet, Medusa is the longest and highest coaster in Northern California. Starting with a 150-foot-tall (46 m) drop, it then executes a 128-foot-tall (39 m) vertical loop (one of the tallest vertical loops in the world), a dive loop, a Zero-G roll, a “sea serpent” roll, and two corkscrews. Of course, all these roller coaster jargon and technicalities mean nothing until you watch the ride for yourself (https://www.youtube.com/watch?v=pAmHNpKtFrQ). We still feel scar(r)ed from just watching the video alone. We also rode on The Batman and The Joker, which were equally exhilarating in their own unique ways. The Batman ride is one of the latest additions to the park, and features a 4D experience, 2 vertical drops which simulate free-falling, and multiple head over heels flips. The Joker on the other hand featured a 78 degree drop, which is sure to make your heart leap out of your chest. Not forgetting a family-favourite, bumper cars that let us take a breather from the rollercoaster rides that left us with nothing but adrenaline rushes.

No matter whether you’re a thrill-seeker, Six Flags is sure to have something to offer everyone, and you are bound to have an enjoyable time there! Unlike chains such as Disneyland, Six Flags can only be found in North America, so definitely visit this as you cannot get it anywhere else. 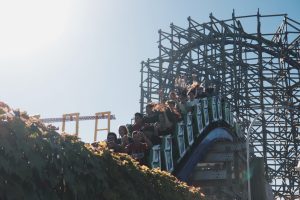