I could tell this was going to be a memorable trip right from the start; It was my first trip with university friends – friends that I had just made during DATE 2019. Looking back prior before the trip, I felt kind of silly that I felt embarrassed to step out of my comfort zone to participate in this trip. At the same time, I am really glad (and still am) that I was brave enough to go for the trip.

The trip, from 20th June to 23rd June, although short, was really engaging for me and I felt really comforted having such friends to spend the time with.

Journey To The East

3 others and I took a train from 杭州东站 to 上海虹桥站. The journey took a little over 50 mins and second class tickets we purchased was surprisingly comfortable. Since it was a late trip, the cabin was mostly empty, and we had the opportunity to sit in a row (not our allocated seats) for a chat session. 50 minutes later, we arrived at 上海 and we grabbed a didi to our air-bnb apartment within the 宋园路 area.

The accommodation was luxurious and big, complete with a living room with 2 couches (enough for 6 people) and had 3 bedrooms (with queen sized beds) and 2 toilets. It was a 5 minutes bike ride to the nearest Metro Station and had convenience stores and dining options within walking distance. We arrived after a 30 minutes cab ride and joined up with the earlier batch who reached 上海 earlier.

However, we had a little dilemma – and that was the fact that the next day (Friday) was forecasted to be rainy from early morning to late afternoon. This was really a bummer as we hoped to visit Shanghai Disneyland in the weekdays to enjoy the cheaper prices as compared to weekends. We spent the rest of the night coming up with a wet weather plan itinerary which included museum visits and shopping mall hopping.

Yeah, you didn’t read wrong, we certainly got PRANKED by the weather indeed. I woke early at 730 to find that the sky was sparsely covered in low lying light grey clouds, unlike the dark overcast gloomy picture as depicted by multiple weather forecast sites. Waiting a while more to confirm the weather with our eyes, we decided to stick with our original plans to visit Disneyland instead.

Disneyland – One Heck Of A Fun Day!

We had a quick brunch at a nearby dining site, and caught a metro train to Disneyland. We arrived and bought tickets at 399 ¥ each (No student or discount price unfortunately 🙁 as we are all adults). 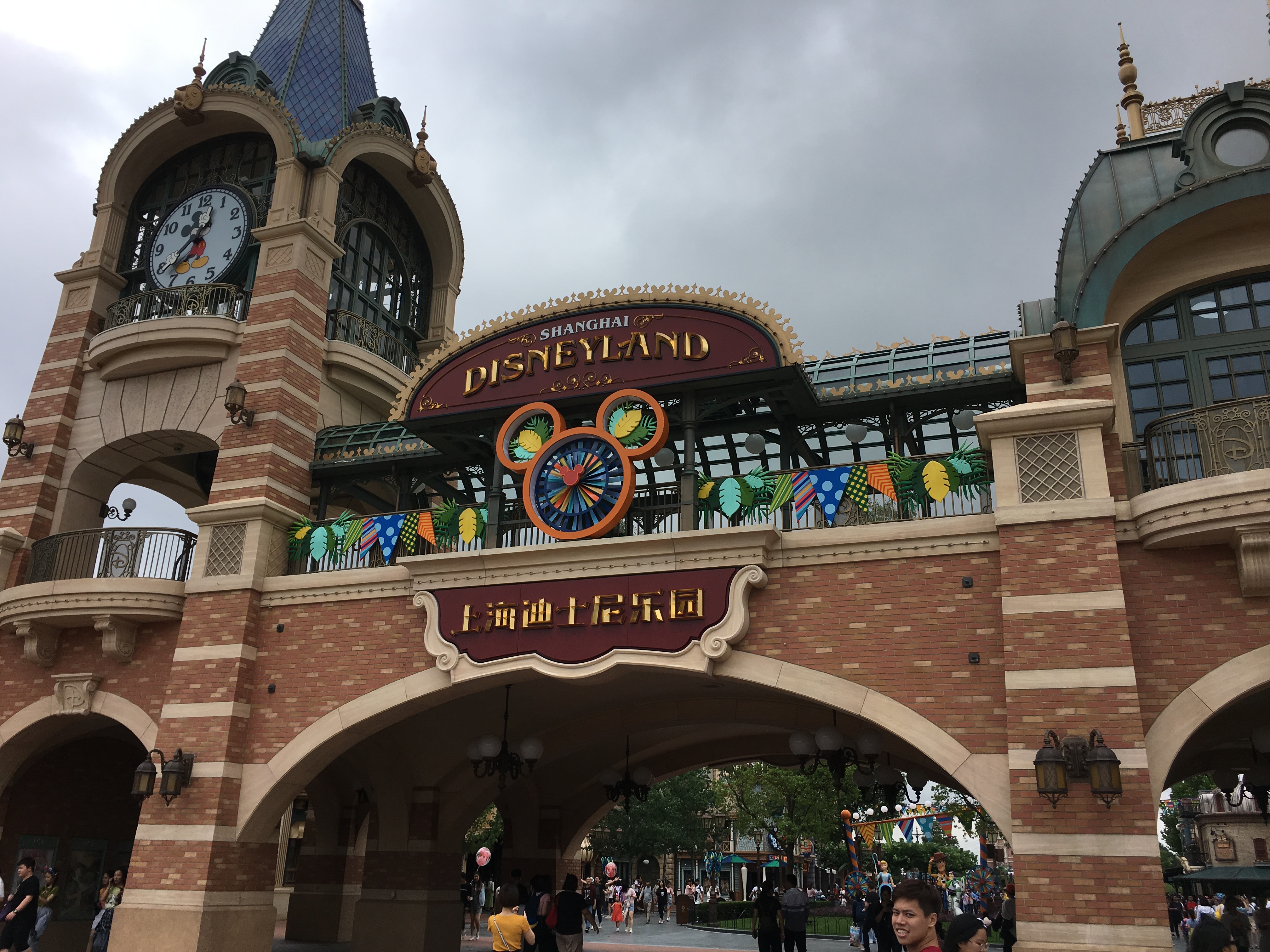 (and yes with the dreadful overcast sky)

Quick fun fact: Disneyland does not allow the entry of walkie-talkies (security reasons), peanut snacks or big water bottles ( 🙄 – despite there being free refill stations inside).

Despite being a Friday, the park was very crowded with not just tourists, but locals and even schooling teenagers (😤 don’t they have school!). We made our way to our first ride: Tron, and it was a long 1hr 40 mins queue. Tron (Too lazy to create an embed code for this lol). The ride was kind of thrilling with 7.5/10 acceleration at the start with good drops (unfortunately not the heart-in-throat kind, but still pleasant and satisfying).

There was a mini parade that lasted 15 minutes and was basically a sing & dance along session of Disney movie characters. We played a couple of more rides, not as much as I thought we could, partly because of the huge crowd and long waiting times. Although I must quote from a fellow friend: “It’s not about the time spent (wasted) in the queues but HOW the time is used (meaningfully) with the people you are queuing with”. Indeed, we had a lot of fun simply just chatting while we inched our way through ride queues.

The castle is certainly a view to behold and I must say I really like this raw image that I took from my potato Iphone 6S camera. 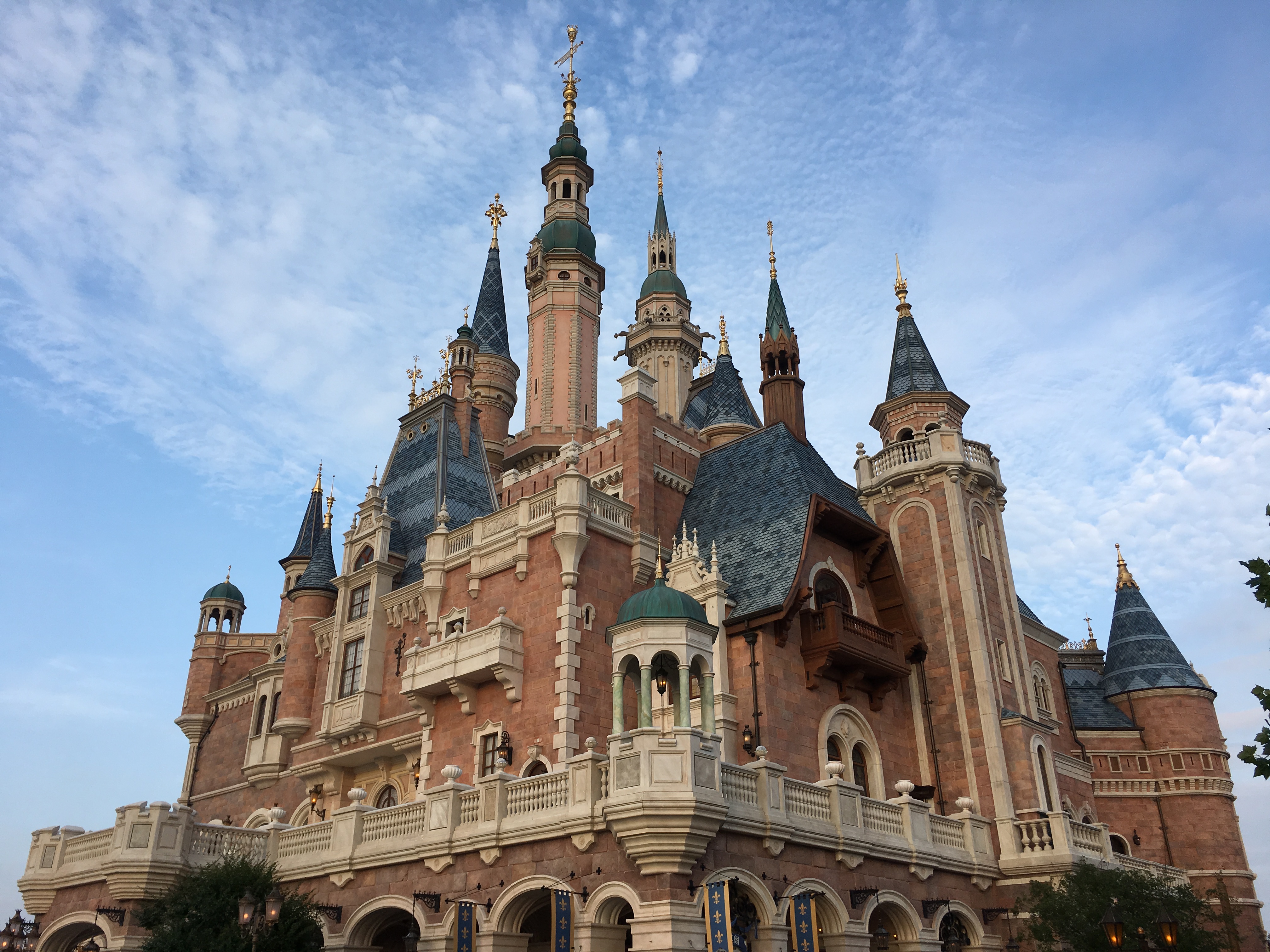 Disneyland has a very iconic daily night show that one should not miss. It was a light-show that was so attractive that hoards of park-goers were camping for seating spots 2 hours before the start of the event. We were spamming rides before the show and we had to squeeze through the tightly packed crowd to find a viewing area that still had sufficient room and breathing space. We managed to grab a space that boasts a very good side view of the castle with 2 minutes to spare. It was less crowded but there was already a size-able crowd still forming so we hurriedly rush over. I don’t have any good shots for this (but perhaps other blogposts would) – you just have to take my word for it that this 20 minute event is something you should not miss for.

We left the park famished and hungry – BUT contented and satisfied, knowing that we squeezed the value of our ticket dry. The waiting times for rides dropped by many folds after the night show and it was a good idea staying longer until the park closed to enjoy some of the longer waiting time rides.

Yu Garden or 豫园 was the day attraction of our second day in 上海. It was really a nature grove gem hidden in the hum-drum of a developed city, surrounded by the towering skyscrapers. The garden dates back all the way to the Ming Dynasty (1368-1644 thanks Google) and was constructed as a (retirement) gift for a Government officer’s parents, being both tranquil and peaceful – perfect for his ageing parents.

Here are some shots of the scenic views: 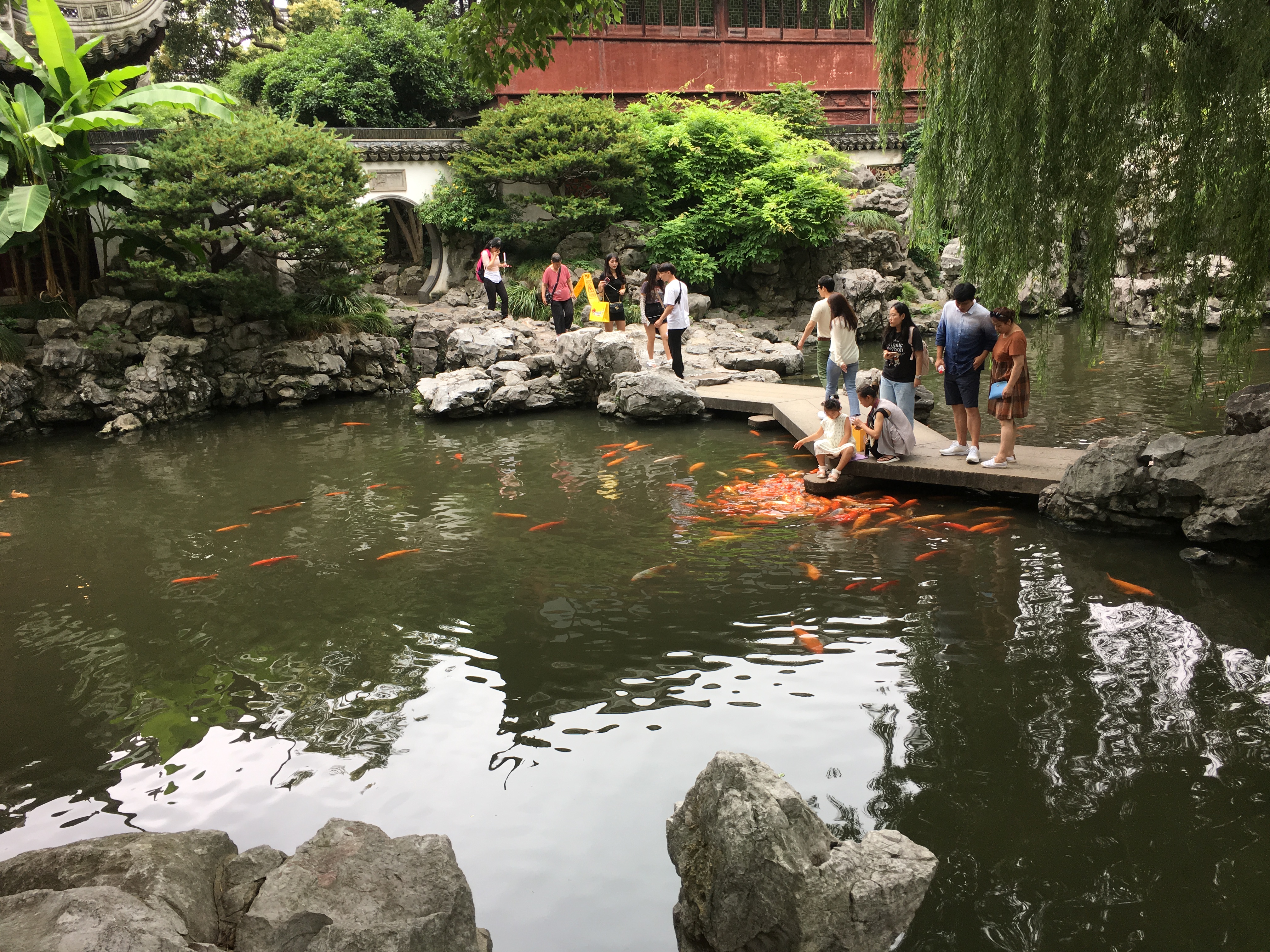 One of the many koi ponds within 豫园

After a quick dinner, we visited the fame view of the 上海 river. Not much happened here, except we spent at least 1.5 hours admiring the view, and taking shots with the Oriental Pearl TV Tower (东方明珠).

A panorama shot of the 上海 river skyline

The city skyline was truly a better site to see (with your own eyes) and no camera (At least I can say so confidently with my potato Iphone 6S Camera) can truly capture its beauty. The place was buzzing with hoards of people as early as 5 pm and although the crowd thinned over dinner, the stretch was still gathered with many people until the late 10 pm -ish timing. At 11 pm on-the-dot, the night lights switch off and we made our way back to our accommodation for our last night.

Today marks the last day in 上海, but fret not we still have interesting sites to visit!

We went to the museum, which boasts 5 floors of traditional China Art, ranging from porcelain vases, paintings, poetry and bronze sculptures. The museum had a vast collection of these delicate preserved art forms, which tells a story about the profound skill-set of the Chinese craftsmen (and crafts-ladies) and the rich China culture as it develops throughout the dynasties.

Here are some hand-picked shots of the trip: (There are plenty more but I won’t spam). 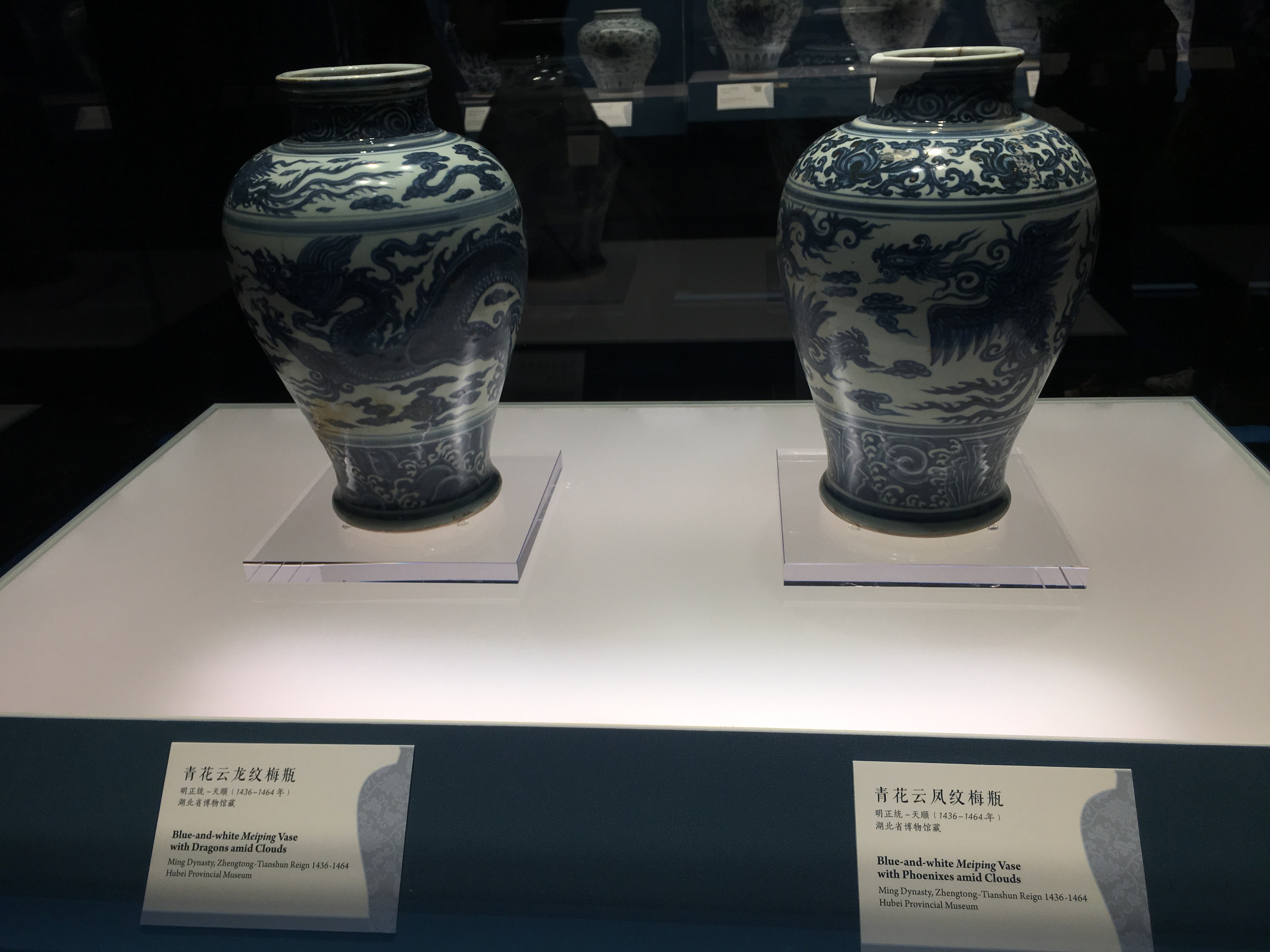 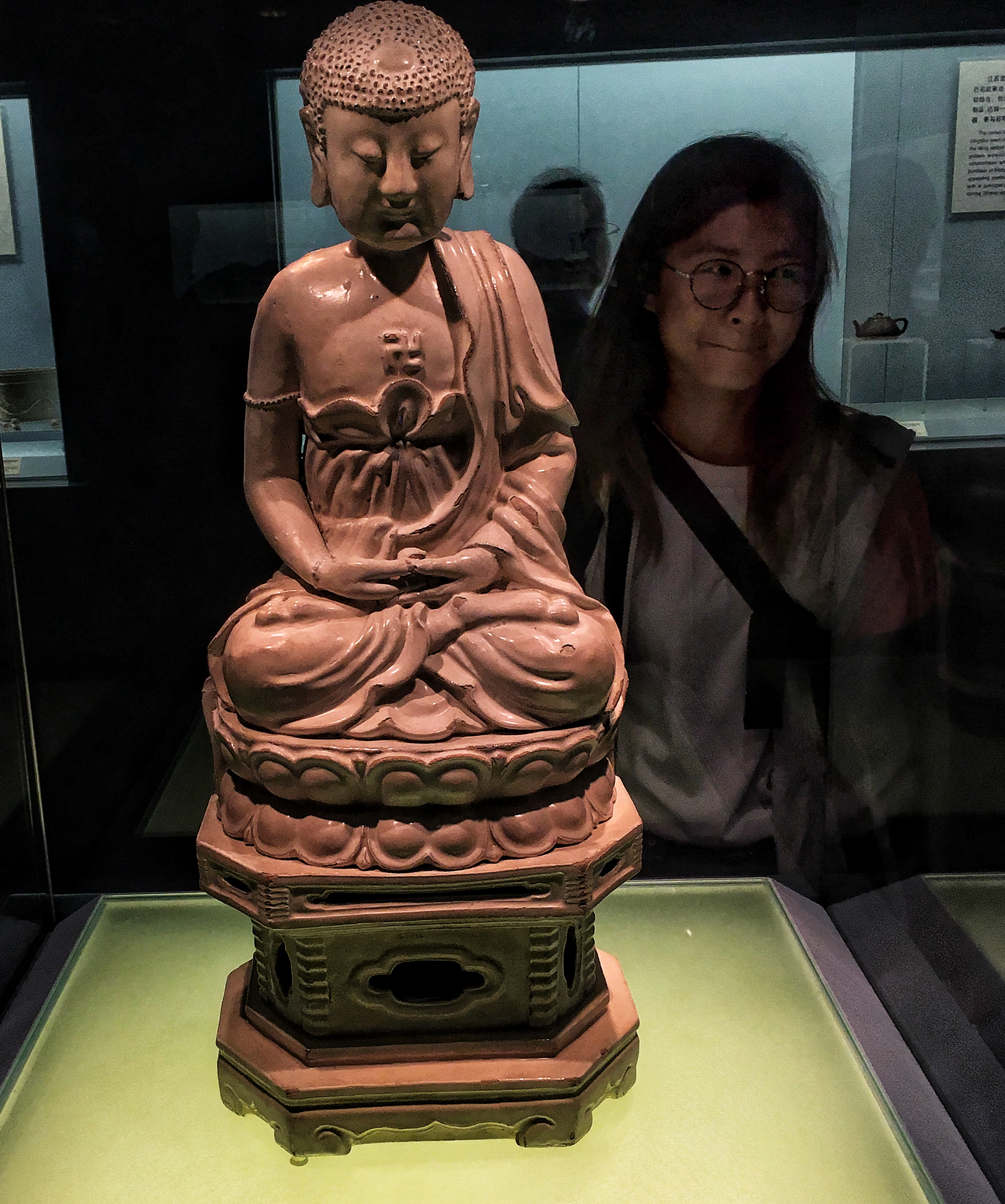 Goddess (photo-bombed by a Buddha Statue) We took a metro to 东方明珠 (Oriental Pearl TV Tower) – Remember Day 2 night? We saw this brightly lit red tower across the river, and were taking shots with it.

The tower looks a tad bit shorter than I imagined it to be – probably because of its tripod-like base structure. This sunset shot has soft golden rays that bath the tower, which makes it really really nice. Of course, its edited slightly, but only to brighten the too dark areas (thanks potato camera 😫). It was awfully costly to go up and compounded with the fact that we are rushing for time, we didn’t and we moved on to the next area. 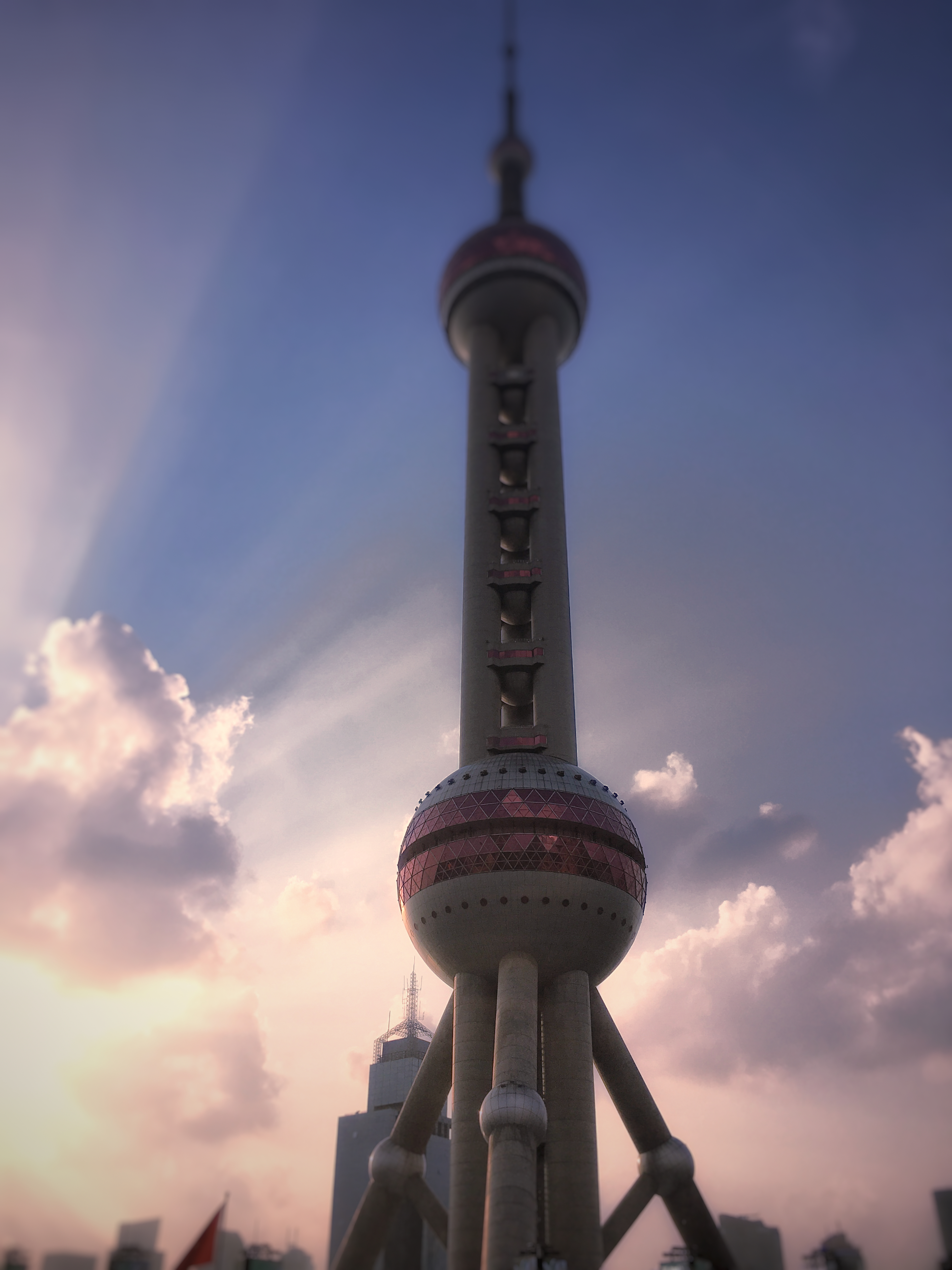 We visited this ultra-classy Starbucks Restaurant, which boasts 2 levels of super-pricey but at the same time the pinnacle of professionally prepared coffee, bakeries and many more. The place also had machinery for roasting coffee beans as well as a packaging line to package them into bags for distribution. The aroma of thick and rich coffee was very enticing (But not enough for me to open my wallet 🥴) – The prices really made me think twice about ordering. 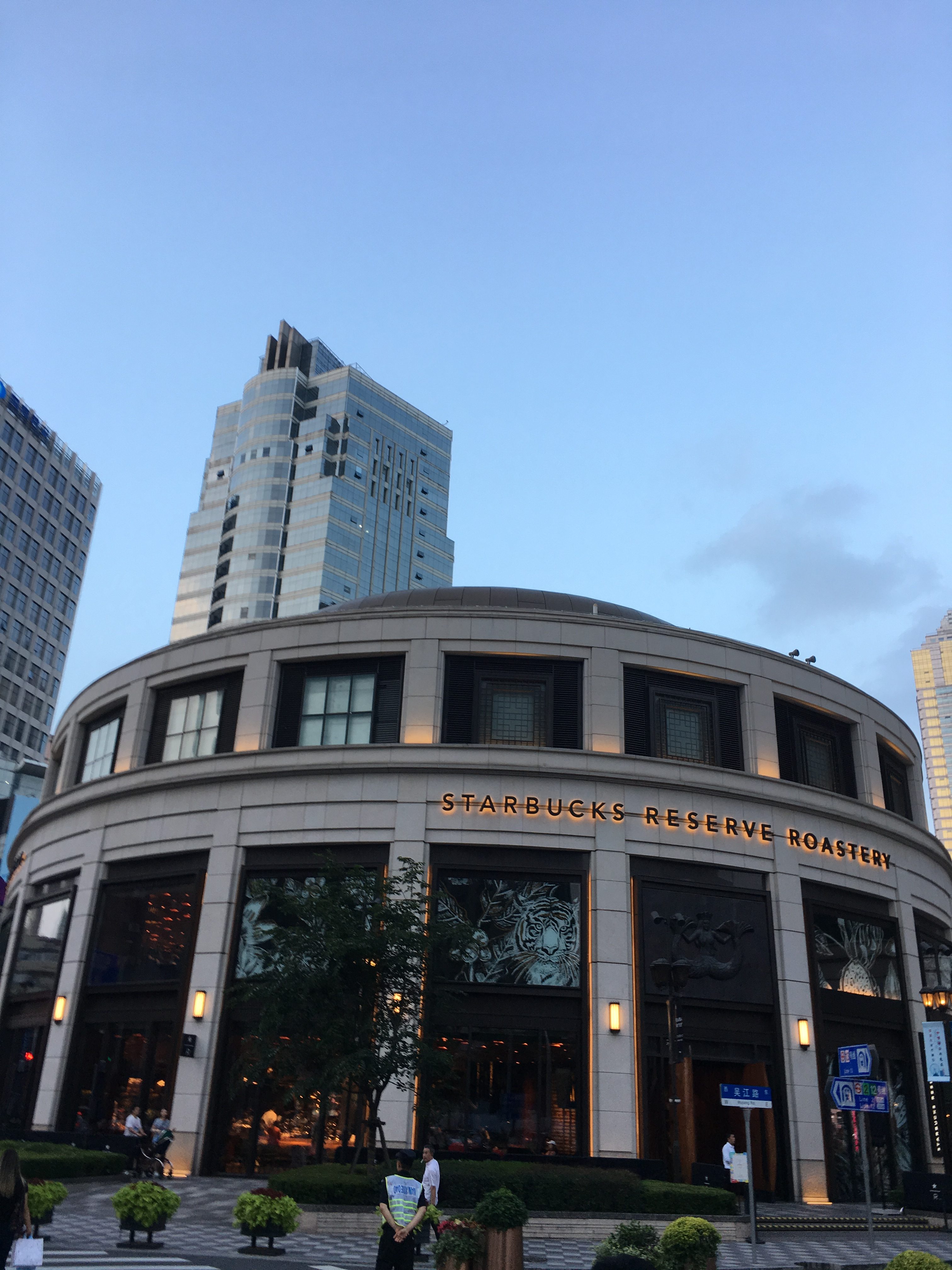 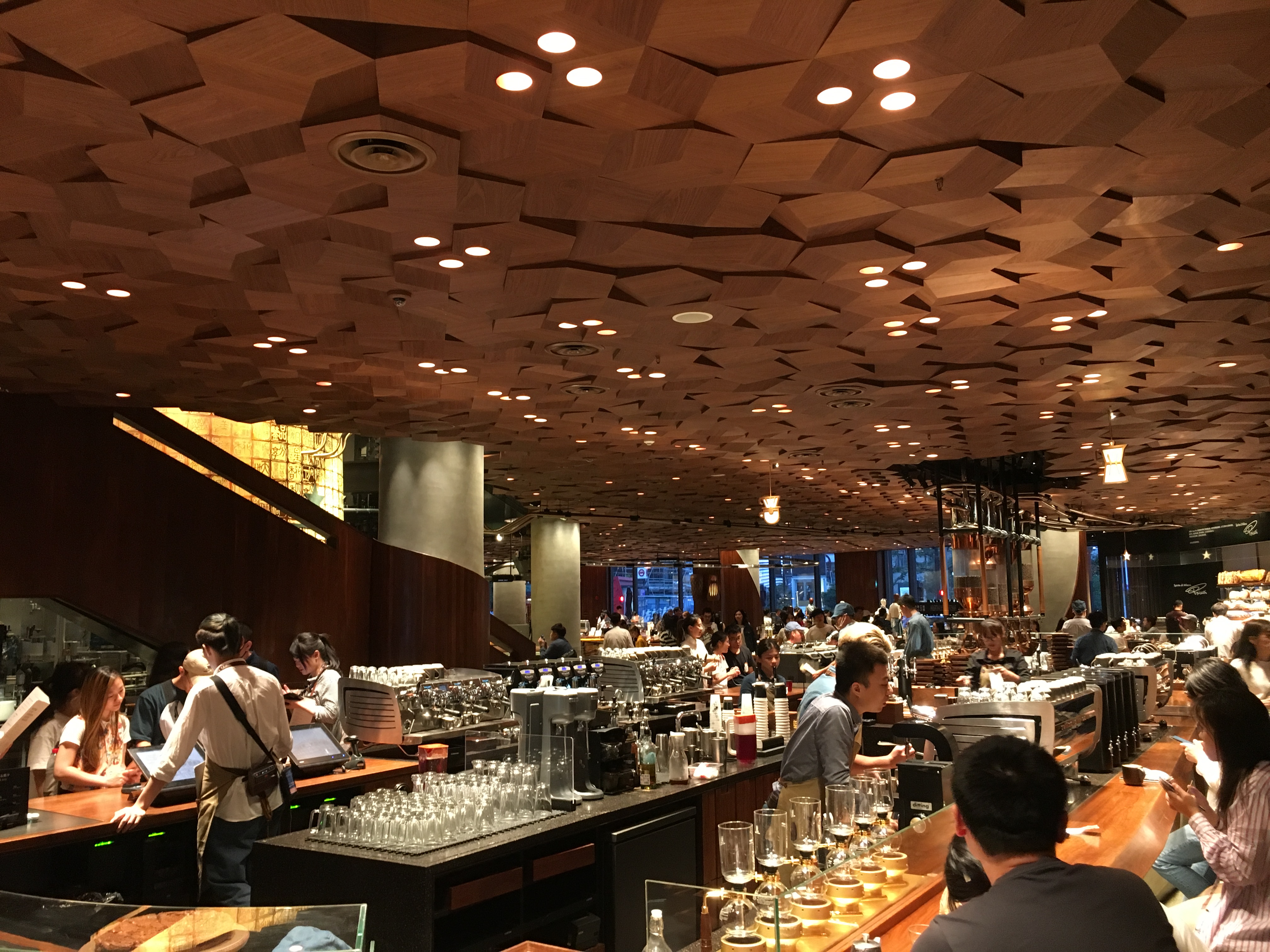 The tip of the classi-berg of this Starbucks establishment

Left 上海 with a irreplaceable memories, I thoroughly enjoyed the time spent here with much cherished much enjoyable company. The journey was always only a part of the satisfaction – what made it extra special was really the company ❤️. I couldn’t have asked for better company. Looking ahead in the upcoming week, there will probably be more involvement in theme projects, but hey, I am without a doubt very glad I clinched the opportunity for this quick but refreshing vacation.