Whoop recess week has come to an end and I’m really thankful for all of the experience that has occurred during this period(:

My friends and I visited the province of Yunnan which was located on the western end of China which was about a 9h high speed train ride from HangZhou. Our journey started off on the previous Friday of our recess week. We woke up in the wee hours of the morning and made our way to HangZhou east station by metro. It was very convenient that the major railway station was connected to the main city by the city’s internal metro. Our final destination was Kun Ming which was the capital of Yunnan province. 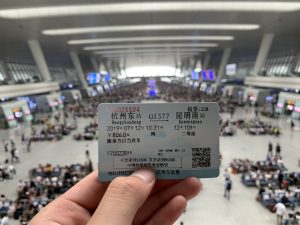 Through the train journey enroute to Kunming, we passed by the heart of China which I saw the different spectrum of natural area from dense forest areas to temperate sparse grasslands. It was a treat to the eyes to see the beautiful landscapes of China passed by me. It made me realise the enormity of China where there are changes in the geographical features of the land which is an experience that we do not have in Singapore. 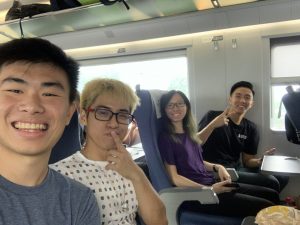 In Kunming, the first thing that we noticed was the difference in weather. At HangZhou, the temperate was hovering around Singapore weather while in Kunming, the temperate was around 20 degrees Celsius which was very comfortable to experience the city. Kunming city is a smaller and less develop city than HangZhou where there were feeder high rise building and had 2 metro lines that connected the city. However, by no means was that a disadvantage, the city felt less stifling with the buildings more spread out. 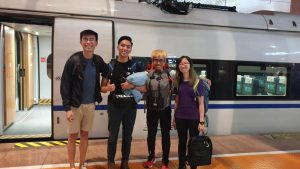 On the next day, we visited 九乡景区 which was a combination of a valleys , caves that were crafted by the erosive forces of the river that runs through the area. The place was rates AAAAA which was the highest rating that the Chinese ministry of tourism. The place certainly deserves that rating, it really impressed me seeing up close in person that scale of natural forces have on the natural landscapes. 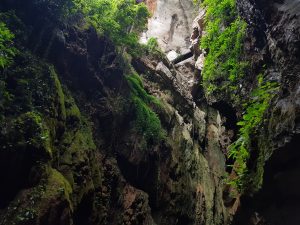 When we first entered the scenic area, we had to take an elevator down to the bottom of the gorge. It really struck me how deep the gorge is that we required to take an elevator down to the bottom of the gorge. When we first entered the gorge, we took a boat that brought us though the river in the gorge where we could see closeup the rock face where the erosive forces of the river was able to cut through the bed rock to form this gorge. The boat ride allowed us to come up close in personal with the rock face that has been shaped by the erosive forces and allowed me to appreciate the difficulty it takes to cut through rock that is this hard and dense to form the gorge that I’m able to see. I was very impressed by China’s value of safety where even on short boat rides like this, they made sure that everyone on board was wearing a lifejacket and a helmet to guard against falling debris. This is in stark contrast to the commonly held mis conception that we have about China where they have a general disregard for safety, but I can safely dispel this myth. With that being said, I would not generalize this statement in saying that the value of the safety is held across all facets of the Chinese economy, but through my interaction and experience so far, I can say that the situation has been improving. 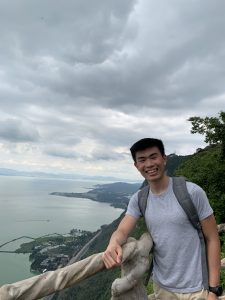 The boat ride was a round trip that brought us back to the entrance of the scenic area where we start our hike through the gorge and the cave systems that has been carved by the erosive forces of the river. The hike started with the path hugging the rock face of the gorge where we could see how deep the gorge is and come closeup to the river that has shaped this geological formation. The gorge was very impressive to me as I saw how far the river has carve this gorge where the sky was a slit when we look up.  After trekking through the gorge area, the path led into a cave system which was more impressive than the already impressive gorge. The caves were very huge and could easily fit a few condominiums inside the structure of the cave which blew my mind. I never knew erosive forces could be so big and could keep its structural integrity despite its large volume. Overall the 九乡 scenic area in my opinion is a must visit when in Kunming. 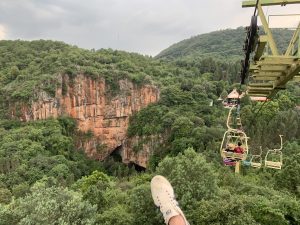 In addition to 九乡景区, we visited 石林scenic area which was 45min car ride away and as the name suggest it was the large collection of rocks that are tightly packed together therefore having a similar density to an actual forest. The rock formations are made up of limestone buildings that has been shaped by the wind. I was even more surprise and amazed when I realized that it was wind forces that shaped the rock formations which was amazing how something that we do not automatically assume as an erosive force was able to create this structures that we see. 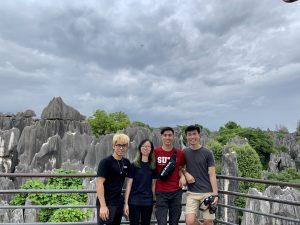 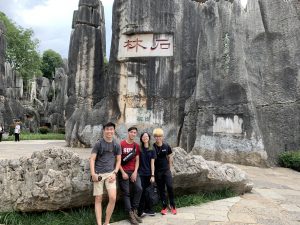 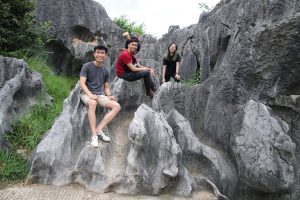 On the last day of our stay in Kunming city, we visited the 西山 that was located on the western outskirts Kunming city which had a panoramic view over looking the entire city and the lake which skirted its perimeter. The hill was a very large formation and we had to take a 30min bus ride from the base of the mountain to the middle point of the mountain where the hiking trails and entrance to the scenic area began. We took a ropeway up to a higher point on the hill and was very impress with the ropeway journey, it was the longest ropeway journey that I took and all the while through the journey, we had the view of Kunming city and the lake. The hill had very beautiful hiking trails where there were many vantage points one we reached the top of the trail and had a particular trail which was created along the rock face of the wall which was very impressive to imagine the engineering feat required to successful create a wide and comfortable walkway that hugs along the perimeter of the rock wall. 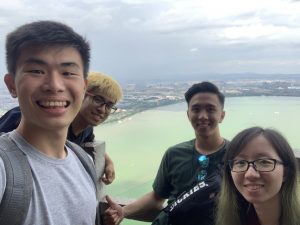 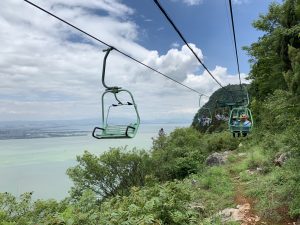 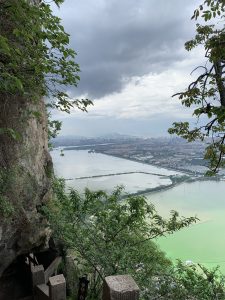 All in all, this first leg of our backpacking trip in Yunnan has been very adventure filled and I’m very satisfied for the opportunity to visit this lesser travelled side of China. The weather has so far held up well and I’m looking forward to more exciting adventures in coming days.