Another week comes along, and I’ll be sharing the second city and favourite city during my recess week travels to Yunnan province.

The journey to Lijiang city began with a sleeper train ride from Kunming to Lijiang city. We started off to a little irresponsible start, almost missing our sleeper train by 5min due to us underestimating the time needed to get from our XiShan mountain range to the train station. After many short burst of runs, we all managed to make it on the sleeper train. Phew. On the sleeper train itself, we went to our own private 4-bed room where we had our own privacy. The cabin itself was smaller than we thought, and we all had trouble sitting up and packing our bag while on our beds. Therefore, we decided to swap turns and wait outside to maximise the space within the cabin. Other than that, the beds were very clean and comfortable, the only cause of complain is the occasional rattle of the train and the change in altitude. Most of us were able to get a restful sleep on board.

We arrived in the wee hours of the morning and we headed from the train station directly to the old town which Lijiang was all so famous for. The weather was super comfortable with aircon temperature all throughout the day. At the old town, I was very pleased by how empty and clean the streets were. The streets had clean running streams flowing through the drains and the streets itself were devoid of any rubbish, truly was any traveler’s dream. The old town really surpassed by expectation, being extremely well upkept and had many modern and clean toilets. I cannot give enough praise to the toilet, it’s one of the cleanest toilet I’ve seen in China, where there are ample cubicles and cleaning assistants who maintain the restrooms. Toilets aside, the old town was everything I expected in an ancient street and more. The town was not overly modernized and westernized, throughout my entire trip, I only saw a MacDonald and KFC skirting the outside of the town which was not bad! The cobblestone streets and the wooden buildings added a quaint charm to the building that reminded me of the streets of Rome. 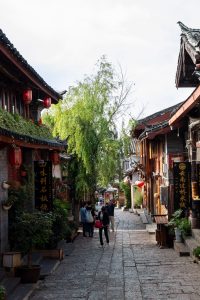 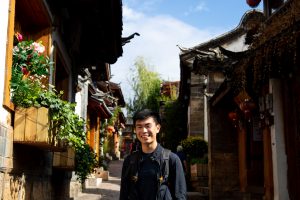 The next day after exploring the streets of the old town, we went to the Jade Dragon Snow Mountain which was known for snow caps and ice glacier. The journey there was rather arduous, needing to swap transportation and the snaking queue added to our frustrations, but we managed to make it up to the peak by around late lunch. At the top, we were able to see the snow cap mountain and ice glacier which were at an altitude of 4.5km above sea level. At the altitude, we had to carry around a bottle of oxygen tank if we require oxygen to if breathing becomes difficult

After visiting the going up to the ice glacier, we headed to the gorge where the water which runs down from the glacier flows into. Tiger leaping gorge is also one of the tributaries which leads into the Yangtze river. The ferocity of the river was a humbling experience, through our perilous trek down to the bottom of the gorge, I was amazed at how much rock the river had to cut down to reach such a depth. We trekked downwards through the rock wall for about 1.5h, at the bottom, we couldn’t even see how our starting point and felt so far down as the sky occupied a small patch when we looked up. The entire tiger leaping gorge was about a 3 days hike across the entire length, but for our trip, we decided to just focus on the midpoint, and hiking down to the bottom of gorge and witnessing the river up close. 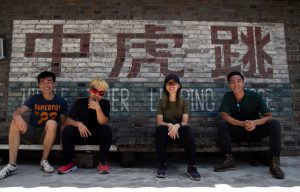 The next part of our adventure, would be our travel to our final city in Yunnan, which was the fame city of Shangri-La.