I’m almost halfway through the DATE program, with this week marking the 6th week in Zhejiang university. Looking back at the journey thus far, I can say with confidence that I was able to develop my worldview perspective and technical skills throughout this short period thus far. I was able to expand on my worldview through my daily interactions, with the local university students, locals and during my company visits. I get to see a different perspective on the habits and ways of life that are happening in a fast-moving economy of China. Understanding the boons and banes of China’s approach to manage the social effects of their rapid economic growth. This I feel is a very valuable insight that I would either wise not be able to gain as an outsider and from my own interpretation of the international media. In addition, the robot origami project gave me the protected time and Zhejiang’s resources allowed me to fail and have time to experiment with the different elements of the code and the Arduino board and sensors. This skill which is not taught in skill is immensely valuable, as it gives us the platform to apply what we learn in school and give us a more wholistic understanding of the topic. Therefore, looking back on this journey, I’m very pleased to have registered for the DATE program and I look forward to more opportunities that awaits me. 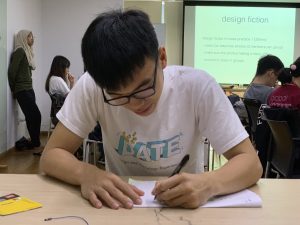 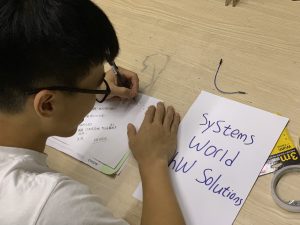 The focus of the DATE program these coming weeks is design fiction which teaches us how to create a narrative with our products, be it as a montage sequence, video or a poster. The audience must be able to draw context and must be easily comprehensible by everyday people. The first task was rather mundane which was to tell a story of how to toast bread, even though the task was rather obvious and straight forward, what really stuck out to me was how the plot and narrative can be told so different, be it the straightforward, sarcastic, spoof or hilarious. I was rather surprise at how a rather simple task can be so different interpreted and retold.

The relaxed curriculum this week allowed my friends and I a trip to Beijing! My trip to Beijing started off with a rocky start as my flight to Beijing was delayed by bad weather conditions and thus push our schedule back by 3h . We realised that purchasing insurance for our flight would have been a better idea as this would guarantee any uncertainty in the event of the plane ride getting cancelled or delayed, we would be able to get some monetary claim. Initially, we decided to save money by not buying the insurance package, but from this experience, we realise that purchasing an insurance for pane ticket in China would be a good idea. The delay aside, I was very happy that we were still able to visit Tiananmen Square and the forbidden city which was a spectacle site.

Visiting Tiananmen Square even though was similar to many other parade square around the world, I felt had very important cultural and political meaning as this was the centre of a very important event in the China’s history. The forbidden city after was very close to the square being only s short stone throwaway from the square which was very convenient for us. The entrance to the forbidden city closes early therefore we had to make haste with our tighter schedule, I’m very glad that we still made the trip to the forbidden city as it was a spectacle place, being the home to emperors for many years.

At night, we decided to try the best of what Beijing has to offer for the Beijing Peking duck and went to a fine dining restaurant called Duck de chine which was located in the upscale area of Beijing. The meal expectedly costed a lot, but I’m thankful that I have the time and opportunity to try an authentic Peking duck from the city where it came from. The duck was slow cook over a 6h charcoal fire which really made the skin very crispy and locked in all the flavour of the smoke. However, not sure if it was unique to this store only, but the flavour of meet was quite mediocre but it did not have the strong duck taste. 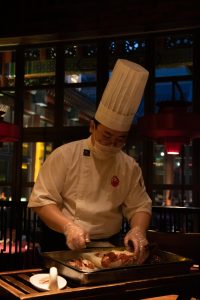 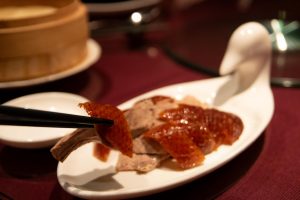 The next day we visited the Great Wall of China, which was one of the main attractions that we wanted to visit when we came to Beijing. It was an attraction that I personally wanted to make as it was one of the world greatest wonder and really demonstrated the capabilities of man, while acknowledging the enormous human cost that it came at. Initially, once again, our journey to the Great Wall was shaky, having gone to a defunct train station which ceased it’s operations to the Great Wall and missing the last train that will bring us to the Great Wall. But we managed to catch a private hire van that brought us to the entrance of the Great Wall. We went to the 八达岭 section of the Great Wall, which was supposedly the less crowded section. We were pleasantly surprise to see that the wall was indeed not too crowded allowing us to have a good experience at the Great Wall.   I was amazed by the steepness of the walls and the sheer willpower of the labourers and the engineering team to make the wall a success. 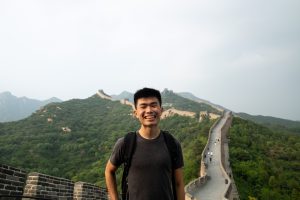 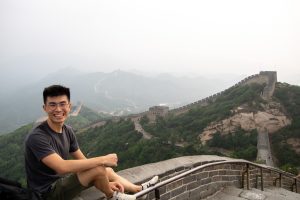 On the third day, we visited the forbidden city and Tiananmen Square. Even though Tiananmen Square can be easily labelled as just another square upfront, knowing the history of the place, made me feel the cultural and historical significance of being on that square where there’s this part of the history books that China does not want their citizens and the world to remember. It was throughly an eye opening and humbling experience being able to stand on the parade square and imagining the courage that the student protestors had standing up for what they believe in. 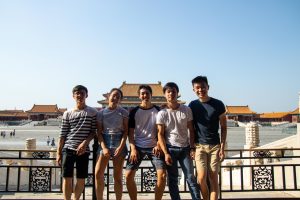 On the fourth day, our last day of the trip, we decided to visit the summer palace located near two of China’s prestigious universities. Peking and Tsinghua unvisited. The park was very extensive and beautiful including Parks and two lakes which were comparable to the size 西湖. However, we were not able to fully explore the park due to the intense Summer heat and the crowd which was admittedly too over bearing for us. Don’t underestimate the weather.

Overall, I’m really thankful to have this time to visit Beijing. Which I would have eitherwise not gone due to monetary reasons, having the chance to go the cultural and political heat of Beijing was an experience which I would not have gotten to experience elsewhere in China, and I’m thankful for the chance for the learning opportunities and the fun I had while in Beijing! 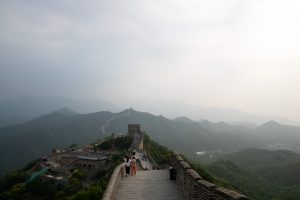