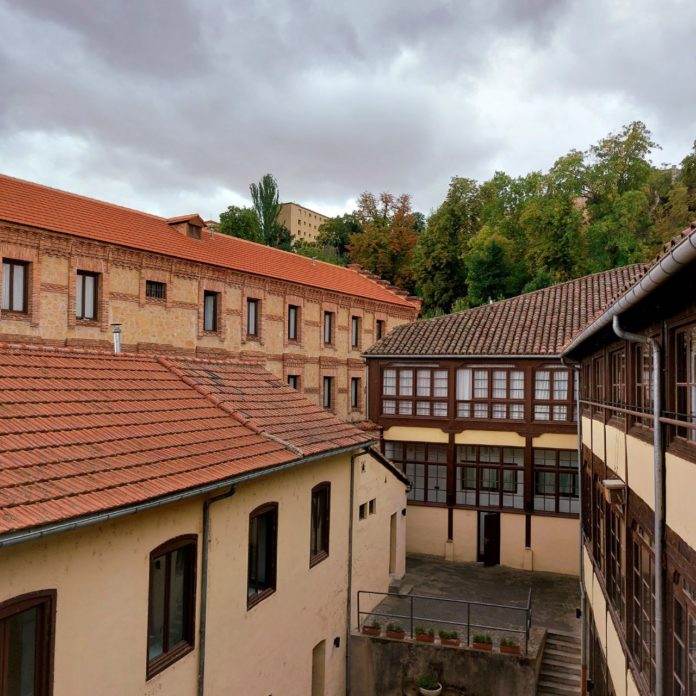 It is commonly believed that the pace of life in Spain is quite slow.

I would agree, however, that is unfortunately not the case for architecture students studying in their third year in IE University, Segovia campus!

Lessons there are in sessions of 1.5 hours, ranging from 1 to 3 sessions at a time. The longest classes are, of course, design studio, which we have on Tuesdays and Fridays.

For our design studio this term, we worked in groups to create scaled wooden models based on pre-existing case studies. In the second half, we adapted these materials to create our own design, in a new site based in Segovia. 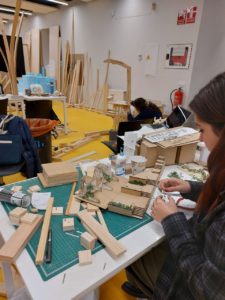 Monday was definitely the busiest day of the week, with three lessons packed almost back to back. On Wednesdays and Fridays, we had a much more manageable one or two lessons, similar to in SUTD. This allowed us more time for working on assignments, go shopping in Segovia’s historic town, or simply have a good old TGIF rest. 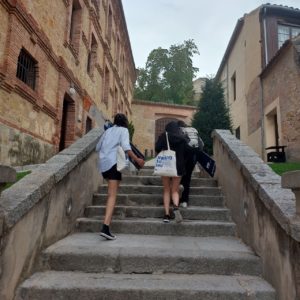 We’re on our way!

Waking up at nine means that unfortunately, the sun has already risen. But there is still time for breakfast. I typically dig into a cup of yoghurt or flan, which seem to be the local favourites in the supermarkets here. Bread is also a staple, as expected of Europe, and there are often a variety of choices in groceries or pastry shops. If there are still ingredients and time to spare, I would also prepare a simple lunchbox to tuck into my backpack.

We stayed in a quiet residential neighbourhood away from the historic centre, about a 15 minutes walk away from the school campus. The walk is usually pleasant, with comfortable weather in autumn. Feeling the warm sunbeams on your skin in the cool weather of Segovia is a great way to start the morning! But remember to put on sunblock, the UV is quite strong here on the hills no matter the season.

The medieval style facades of the buildings in Segovia, often having only two or three levels and either tiled or painted in earthy tones, starkly contrast the high rise blocks we are used to seeing everywhere in Singapore. I find these houses absolutely charming, and they give much character to the small city. 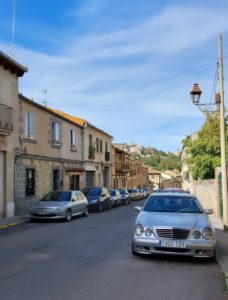 A view from the road to IE Segovia campus

I soon learned that it is a good practice to check the weather forecast before leaving. Although the rain was often light, it can be troublesome to be caught in the rain since there aren’t any overhead shelters like in Singapore. It rains quite a bit in fall, and if you are lucky, you might catch the snow in winter! Good shoes are also a must – the stone roads can get quite tricky in hilly Segovia.

Check in to class! Most students at IE are very punctual, likely because of the strict attendance policy for lessons. We are required to check in within 10 minutes of the start time. After finding a seat, we scan the attendance QR code flashed on the screen and check in via an app.

The 11am class on Monday is Urban Strategies, where we learn about mapping cities, and theories on urban planning. Case studies are heavily used and there is plenty of pre-reading as well as data analysis involved. I found that the international students in this class are very proactive in answering professors’ questions and taking part in discussions.

This class’s assignments focus on understanding cities, how to research and explore urban themes, as well as exploring ways of representing our research results when making maps. From there, our professor gives us advice on how to proceed with corrections or additions to make the maps more readable and richer with information, which requires quite a fine balance. 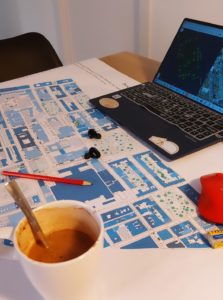 Working hard on my group’s urban map with a cup of hot chocolate, a Spanish favourite!

Yup, you didn’t read that wrong, lunch time in Spain is typically starts around 2-4pm.

Although the dishes in the larger canteen change daily, dining on campus is definitely not a cheap affair. A set meal, consisting of two types of dishes and a dessert, would cost almost 8 euros. We also often order sandwiches, donuts and coffee for about 2-3 euros each, for a more affordable snack. To be fair, these prices are fairly standard, considering the cost of eating out in Segovia, overall.

An alternative is the sandwich and salad café, found in a cozy underground space aptly named “the Cave”. There are quite a few choices to mix and match one’s salad to one’s liking. They also offer coffee and pastries here. It’s a 15 minutes walk to the historic centre where the restaurants are, so going there for a heartier meal is also an option for days with longer lunch breaks. If you like to cook, as I do, you may also choose to bring a lunchbox, which would save you quite a few euros in the long run. 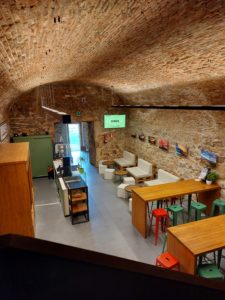 The Cave, before students flooded in for lunch

While we found the late lunch timing strange at first, we find ourselves having late lunches and dinners more often when time goes by, since classes are structured this way. It definitely takes some getting used to, but by the end of our stay, it no longer feels strange to us to start eating lunch at 3 or 4pm, and dinner after 9pm. People in Spain also tend to sleep late and wake up later, though the exciting night life in Europe is probably a large factor in that phenomenon.

Finding our next classroom, we settle in for our Constructions Systems and Applications II class at 3pm. Similarly, we learn through lectures and case studies, as well as presentations by our peers about construction details in architectural works that interest them. I found that I really enjoyed finding out more about the projects that interest me and how they really work.

For assignments, our professor asked for a mix between hand drawn and digitally drawn CAD files. Since SUTD doesn’t require hand drawings, we were in equal parts excited and nervous about our first ever hand-drawn assignments. Presentations are also an important part of the curriculum, where we research about particular systems, such as foundations, or roofing, and share drawings and photographs with the class. 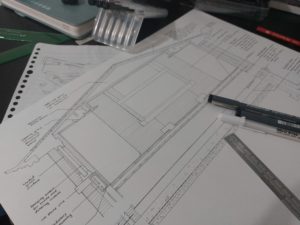 The Robie House by Frank Lloyd Wright, in detail, after many hours of hand drawing

Construction class in IE goes into more detail about the different systems involved in building a house. More emphasis is also put on the differences in construction parts that are made necessary by climate and seasons, which is not much of a concern in tropical Singapore. The professor was also very particular about how we should draw and indicate the different layers that go into each building part, following industry standards, and her slides describe the whole process in much depth.

Much of the local population does not speak English, and it is rare to find written English in stores either. Spanish class helps us to understand and get around in our daily life, and the feeling of accomplishment when we manage to communicate something, albeit simple, in Spanish is really quite exciting. Personally, I found it easy to pick up the basics of Spanish, as I am a little linguistically inclined and familiar with how to study it, from my experience studying a third language in secondary school. That being said, I am not yet confident enough to speak it to locals, who speak quite fast.

Spanish class happens twice a week, of 1.5 hours each. I was fortunate to have a very friendly and patient professor, Marco, and classmates who like to joke around. The time flew by really fast in each class, and Spanish quickly became my favourite course. I was sad to have to leave at the end!

As the class is a crash course, it does tend to go very quickly through its syllabus. I’d strongly recommend starting to learn some basic phrases in Spanish before even arriving in Spain (we used Duolingo & became obsessed with maintaining our daily streak). It’s also a great window to understanding the culture here, and handy when out shopping or traveling.

Brrr… The sun sets early in fall and winter, so the road is dark on the way home, and it often gets cold quickly after sundown. Most supermarkets close around 9pm, but if we are quick, we are able to grab some groceries from the supermarket nearby before they close. Time to head home for a late dinner (not late at all by Spanish standards), wash up and go to sleep! 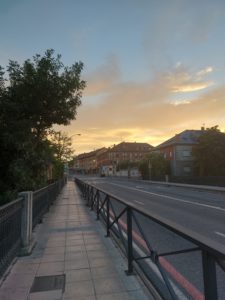 A lovely sunset to end the day