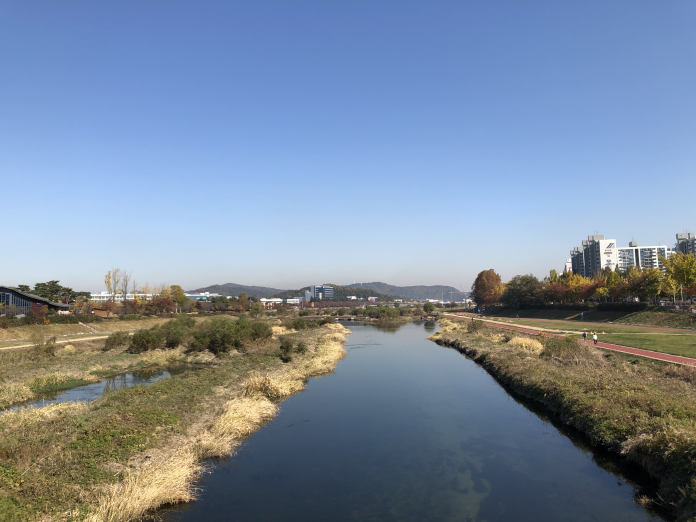 KAIST lies north-west of Daejeon in Yuseonggu, one of the five boroughs that divides the city. The main gate of KAIST campus faces a stream that separates the campus from the rest of the city. To walk out of campus alone takes 15 minutes. There is only a bus 20 minutes to the nearest station and the metro within the city too is sparse. It is better to just take a cab.

The city of Daejeon is shaped by the three streams that run through it. Arterial roads run along the curve of the streams, branching off into smaller roads into the city. Jogging paths are constructed to weave through bridges that hang perpendicular to the streams, connecting the divided land.
Daejeon is an administration hub, a transportation hub, and a science hub. From its conception, it was designed to be so and in that aspect, Daejeon as a city has succeeded. However, in other aspects, Daejeon finds itself lacking. Cultural sites take the form of museums and gardens. There are a few mountains and hiking trails. The locals call this city a ‘no-jam’ city. Students here find entertainment in PC bangs and Coin Karaoke.
There are a few downtown shopping districts: Daejeon Skyroad and Dunsan. Of course, we can’t compare these to Nampo in Busan and Myeongdong in Seoul. Here, people gather and occasionally, the city organises festivals and performances.
As for food culture, Daejeon is as alive as the other cities. Restaurant businesses thrive in South Korea and everywhere, there are mom and pop shops, each with a menu of 5 items or less, always specialising in a dish. Variety is great, even here in Daejeon. While Daejeon’s specialties aren’t much to chase after, there are a select few of restaurants that have become a favourite and we regularly visit. The restaurants here also do not try to oversell. They do not promise ‘odeng from busan’ or ‘andong specialties’, no, they are simply the cooking of the ajumma in the shop. People come to the restaurants to eat simply because the food is good.
Thus, while I can’t say Daejeon is a city worth visiting as a tourist, it is certainly a liveable place and it has its charms. If you come here for your graduate studies or research, it is not completely a ‘no-jam’ city.
Click to rate this post!
[Total: 0 Average: 0]