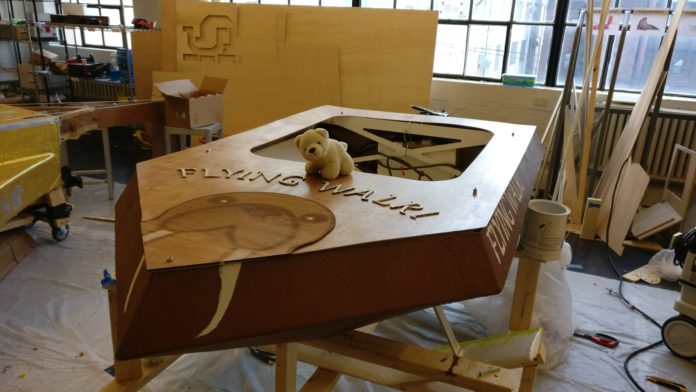 Our previous week ended on a very busy high, culminating in a boat race (or a circuit, at the very least) around the Charles River. Our packed schedules didn’t let up, though, as we busied ourselves working on the next immediate hurdle, presentations.

Week 10 started with presentations from each group, where we went through our groups’ motivations, designs, challenges, etc.. It was a great way for all of us to look beyond our own experiences within the program, into the thought and building processes of the other groups. I’d never known, for instance, about Team Lobster’s cart problems! We followed that up with several hours at the IDC, clearing up our working spaces and giving the floor a good mop… a thoroughly good mop, given the numerous epoxy and paint stains spattered about the floor. Our boats were prepared for storage, (probably) never to see the light of day again… though that’s probably for the better, since they weren’t designed to last! Those were to be our final hours spent at the IDC – I’m pretty sure we’d come to miss the great facilities and tools available in the IDC workspace.

On Tuesday we embarked on a programme-organized day trip, where we took a fast catamaran ferry to Provincetown. In Provincetown some of us opted to cycle around the island, and others to sight-see. As one of the cycling party, I joined the rest in cycling to the beach on the northernmost point on the island, feeling for the first time in my life a legitimate level of sea spray – in the strong beach winds, it was basically a constant drizzle! We didn’t stay long, though, since we were all in shoes and didn’t have any beach gear; so after a half hour of chilling we started on the cycle back. The cycling paths were gruelling for the upslopes, but the payoff on the downslopes was awesome! We then spent the rest of the time sightseeing and feasting on the seafoods of Cape Cod. At night I had some amazing lobster rolls, and we ended the day with some standup improv comedy.

On Wednesday we had a capstone event at MIT’s Green Building, where we had discussions regarding reflections on the programme, and breakfast/lunch provided besides. The meet was great for solidifying our takeaways from the previous ten weeks, as well as for free food! Free food is always great. Especially two meals from the same event. College student life!
Thursday and Friday were our final free days in Boston, mostly left to us to pack up our belongings and prepare for the trip home. Highlights of these days included a barbecue and a mini photo op with the iconic MIT dome. The barbecue was organized by Jesse on Thursday evening, which would be our last meeting with the fantastic TAs and IDC/MIT staff. This barbecue quickly (d?)evolved into a makeshift frisbee throwabout/soccer kickabout/wrestling armabout?, with us running riot about the space around the Kresge auditorium. As far as the programme went, these moments would turn out to be some of the most peaceful, with zero milestones and deadlines left to strive for, and just wistful contentment at our soon-to-be-over company.

Leaving has turned out to be bittersweet.  The past summer has been the most enjoyable summer of my life – encompassing everything, from trials and tribulations to wonder and fulfilment, from quiet and peaceful moments to fellowship in gatherings. Getting to learn so many new things in an environment so conducive for learning, and meet so many new people with differing outlooks and approaches to everything, has been extremely eye opening; and there is sadness in knowing that it has come to an end. Don’t cry because it’s over; smile because it happened.