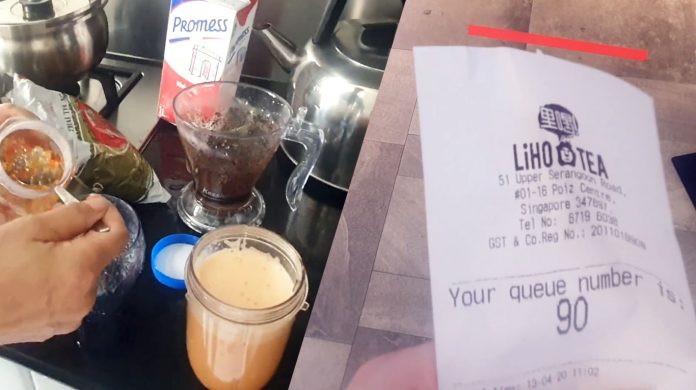 With the lockdown, only a number of essential services were still allowed to operate – sparking a debate on the essentiality of outlets selling our informal national drink.

The Bubble Tea Diary is one of seventeen short films from the Singapore Circuit Breaker Diaries produced at SUTD’s Asian Non-Fiction Film Lab.

Amidst the increasing spread of the COVID-19 virus in Singapore, the Singapore government announced a “lockdown”, or Circuit Breaker, as described by our Prime Minister, starting on 14th April and ending on 4th May. With the lockdown, only a number of essential services were still allowed to operate. Upon hearing the announcement, most business owners were left worried; fretting over whether their businesses fell under the said essential services. Many also wondered if their jobs would be affected.

There was also a sizeable group of people with a different concern in mind: will outlets selling bubble tea (our national drink!) shutter? To many, bubble tea is a must-have; a comfort food to indulge in especially after a long day of work. Yet to others, bubble tea is just another F&B option, and so would hardly be considered essential. Luckily for the former, bubble tea shops were allowed to operate in the first phase of the circuit breaker. The decision to include bubble tea shops under essential services was the source of much controversy and led to heated arguments between the two groups. Some felt that bubble tea was not essential and that keeping these shops open would needlessly increase the exposure and risk of spreading the virus. To others, bubble tea was life itself. Looking at the online debates for and against bubble tea, one can only wonder if bubble tea is really that essential.

This question is the main focus of my short film, “The Bubble Tea Diary”, as I showcased the lengths people were willing to go through to get their daily fix of bubble tea from when bubble tea shops were still classified under essential services, to after it was taken off the list. Furthermore, I documented the evolution of the COVID-19 situation through the interactions and conversations with my parents as I pressured them to allow me to get my regular doses of bubble tea.

Through the short film, I managed to highlight the key points raised earlier. For instance, the meaningful conversations I had with my parents added a human touch to the story. Even though they could be against the idea of me heading out during this circuit breaker, they still supported me eventually, so much so that they went out of the way to drive me to the nearby mall. These conversations also highlighted some of the concerns and reactions of the older generation to the current COVID-19 situation.

I also covered the development of the COVID-19 situation in Singapore, such as the case of McDonald’s staff contracting the virus, the introduction of social distancing measures, and the fines that came along with them.

Last and most importantly, I showed the progression of the lengths people were willing to go to get their bubble tea fix. Before bubble tea shops were excluded as essential services, there were barely any queues to get bubble tea when I went to a bubble tea outlet on 13th April. The original idea was to actually stop there and complete the film by including the struggles I went through during the first five days of not having bubble tea. But with the announcement of the tighter measures and the removal of bubble tea shops from the list of essential services, I was inspired to showcase how far some were willing to go to get their bubble tea. This allowed the film to better address whether bubble tea is really that essential to people in Singapore.

Find your way with a wave of your hand – just like in those sci-fi movies!