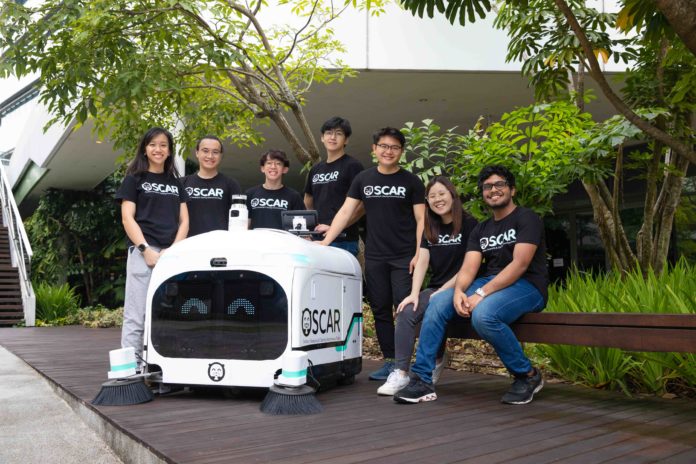 But what about keeping the outdoor areas as spick and span as the indoor areas? With Singapore’s tropical and unpredictable weather, as well as having a bigger surface area to cover and clean. creating an outdoor cleaning robot is easier said than done.

However, our students are always up for a challenge. Meet OSCAR (Outdoor Sweeping & Cleaning Autonomous Robot), an intuitive robot with human interactivity capacities that, as its name suggests, is specifically designed to clean outdoor and communal areas. From hardware to software, all aspects of this inventive automation were created by students from different disciplines. 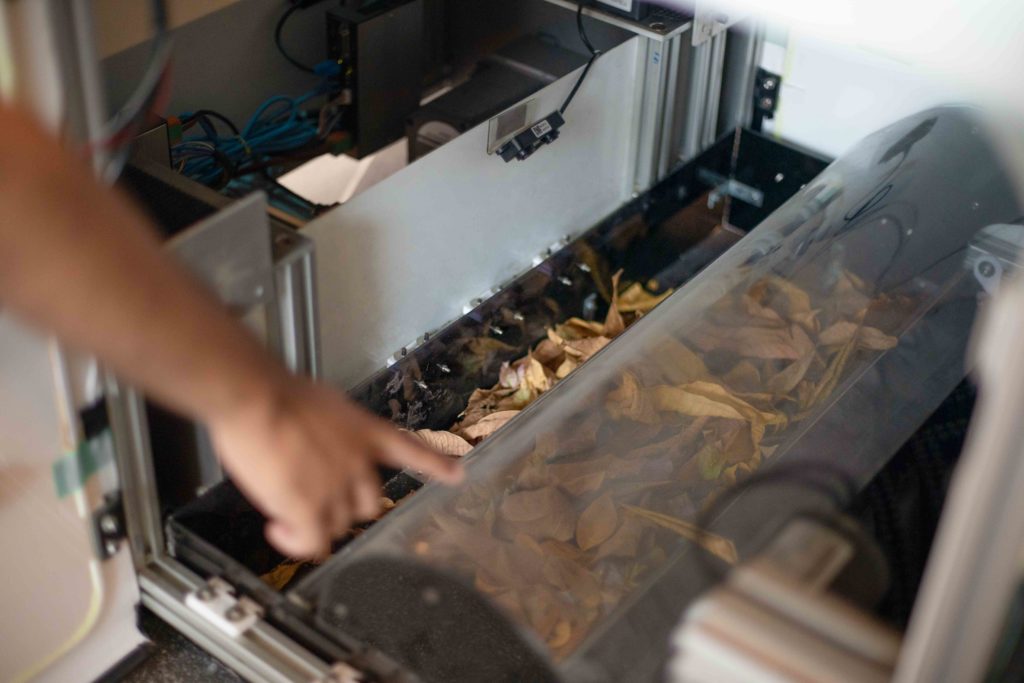 OSCAR is designed to clean outdoor areas of rubbish, such as fallen leaves.

Design thinking and agile methodology to enable successes
The team’s industry partner, Lionsbot, is an autonomous cleaning robot startup that focuses on indoor robotics,  but the company also has plans to design robots that can operate outdoors. The team knew they had their work cut out for them —but where do they begin?

That was when the team turned to the foundations of what they learnt in school. At SUTD, students are taught the design thinking methodology during their freshmore year. Beginning with the empathy stage, the team brainstormed and established the users’ pain points. Next, at the ideation stage, the students explored various creative ways they could approach designing the outdoor cleaning robot, refining the problem statement whenever required.

“It was also about optimising and improving their (Lionbot’s) workflow, and then coming up with solutions for them to improve their deployment process,” says Jing Jie. “We also had to think about new ways and innovative perspectives on how we see the future of mobile cleaning robots.”

This allowed the team to understand the specific challenges that outdoor robots face, such as the unpredictability of the physical environment, and the weather. “We developed an object detection model so that OSCAR is able to detect vehicles, not just visually, but also identify its location and how dangerous it is and to map a path away from it,” Jing Jie elaborates. “We also integrated weather API, so when it’s going to rain, the robot will seek shelter.” 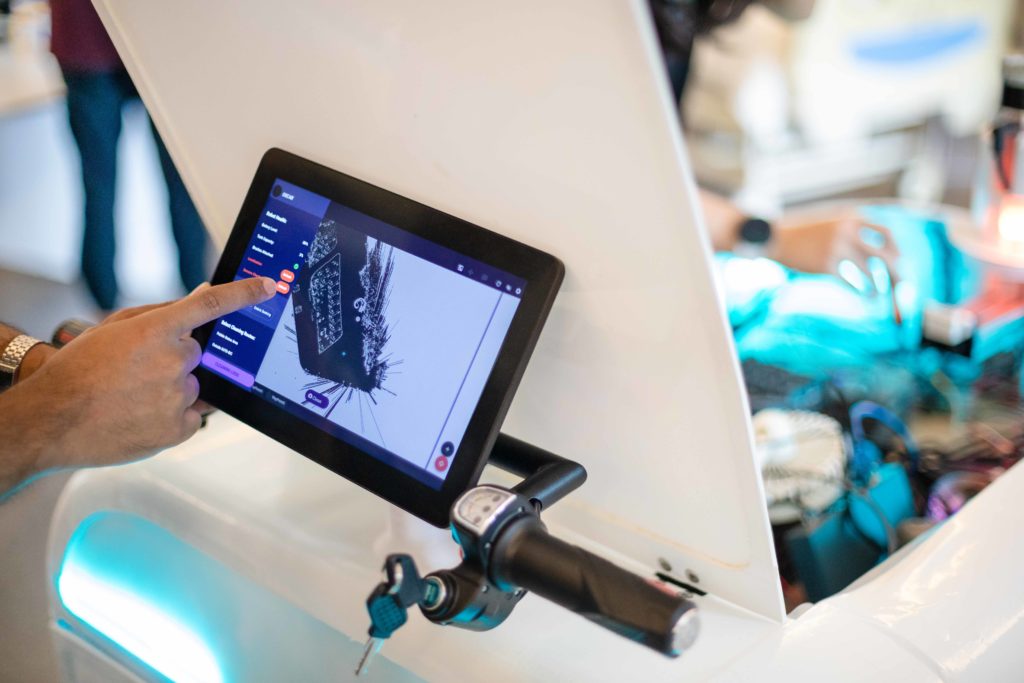 But the biggest challenge that the team would face would be building the entire robot from the ground up, and understanding the scope of work involved. This included connecting and integrating hardware components like the sensors, computers, and frames with software such as perception systems of object detection models, segmentation models, and the overall interface. While some hardware was provided, the rest had to be built from scratch by the members of the team, including the frame and cleaning mechanisms. As the team did not have an initial source code to work with, they also had to research and emulate open-source codes. Resolving these complexities and juggling priorities was a big challenge for the team from both the hardware and software perspectives.

To do this, the team took inspiration from the Agile methodology and practised a highly structured team management system through sprints, retrospectives, and stand-up ceremonies. Jing Jie and Kai Jie co-led the teams in software and hardware development respectively, with each member taking ownership of their work and participating actively in discussions.

“We didn’t work in silos because we knew that all the systems really needed to work together to achieve the final outcome,” says Jing Jie. “The systems we set in place helped us to manage our differences so that we could communicate transparently and effectively. This was the key to the team being more highly functional and productive.”

The human touch
The team could have stopped at making a robot that was purely utilitarian. But what if we can think of OSCAR as being cute, or adorable even?

Specifically, when OSCAR moves, its eyes follow its path of motion, just like how we would move about and interact with our physical environment. This intuitive signal, instead of flashing signal lights employed by many other robots, instinctively tells us the direction that OSCAR is headed. Not just that, but OSCAR also has other facial expressions— such as smiling every now and then, and even falling asleep! 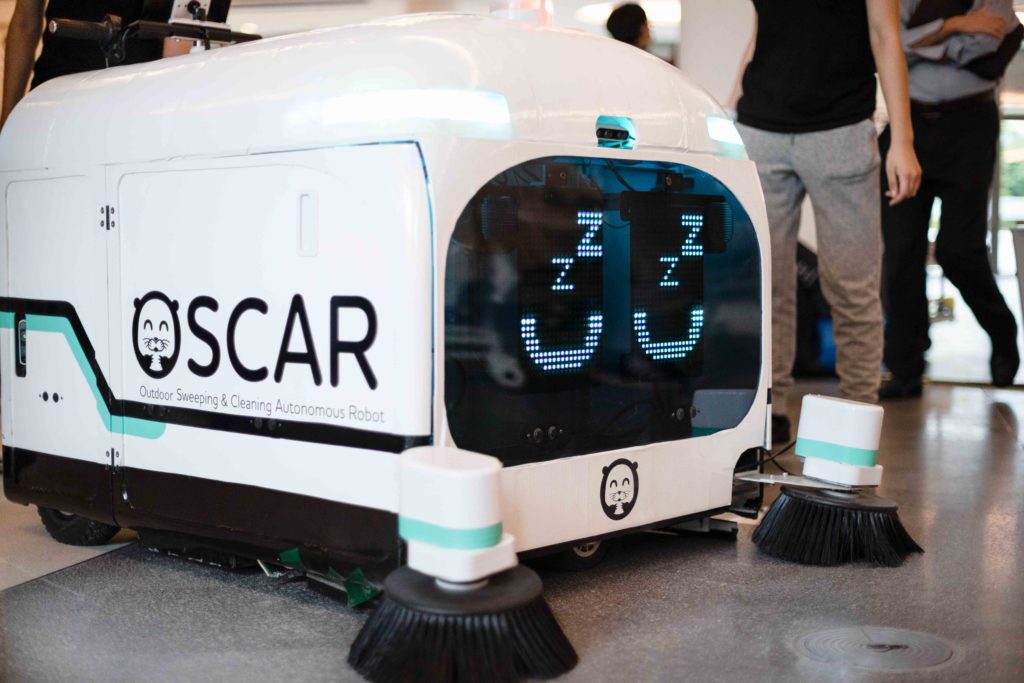 This design choice of including a simple LED panel on a robot to enable OSCAR to make facial expressions and interact with users received numerous positive feedback, including one from SUTD lecturer Dr Franklin Anariba, whose research interests include design thinking. Talk about the (LED) eyes being the windows to the soul!

“When you look at it, you sort of feel like you understand the robot, and it even gives you some kind of feeling towards it too,” shares Marcus.

Robots for the social good
The team envisions cleaning robots as a solution for social good and sustainability in Singapore’s future. Rather than replacing manpower, robots can instead supplement the lack of manpower by taking over certain labour-heavy work. They highlighted how the COVID-19 restrictions exposed Singapore’s heavy reliance on foreign labour, and their hope to move beyond cheaper labour and upskill the cleaners with their project.

“We realised these robots cannot replace manual labour or cleaners; they’re more of like an upgrade to the cleaning staff. Instead of having many manual cleaners, we can now have robot operators; workers on a higher, technical level,” comments Anirudh.

In line with their vision of upskilling the cleaning crew into robot operators, OSCAR can be operated via an easy-to-use app, and comes with a set of self-maintenance tools such cleaning brushes.

With the project done and dusted (pun intended), the team will be handing over OSCAR to their industry partner, where it will enable the company to venture into the new territory of outdoor robots.

Find out more about OSCAR at:
https://capstone2022.sutd.edu.sg/projects/oscar-outdoor-sweeping-cleaning-autonomous-robot

Like what you just read?
To experience more SUTD innovations Designed for People x Powered by Tech like OSCAR, visit our Open House on 18 and 19 Feb, and visit our website https://openhouse.sutd.edu.sg/.