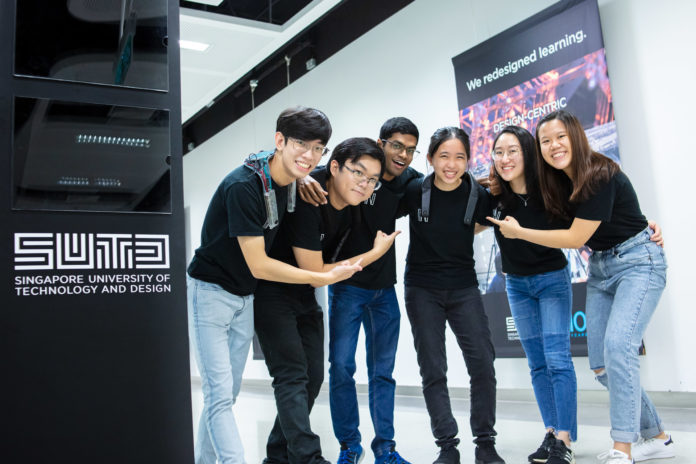 If you’re reading this right now, chances are, you have no issues navigating this world by yourself. If we were to ask you to make a right turn, you’d do it in an instant. If you encounter low-lying overhead structures, you’d dodge them with inherent ease. That’s because you are still very much blessed with the precious gift of sight.

But how would our friends in the blind and visually impaired (BVI) community respond to these situations? 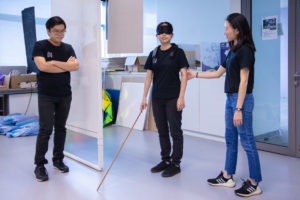 Here’s a scenario. Fred, a visually impaired person, has just been told by Google Maps to make a right turn. But here’s a problem. There’s an overhanging obstacle to his right – an unruly tree branch jutting out into his path.

The white cane he’s using can’t detect that. It can only pick up what the team describes as “ground level obstacles.” Fred wouldn’t know there’s an obstruction right next to him.

And even if he does (perhaps someone told him), how far right should he turn to avoid it? 45 degrees? 90 degrees? Maybe somewhere in between? And how can he be sure, in the absence of visual cues, that he’s indeed made an exact 45 degrees turn to the right?

“This is a problem the BVI community encounters during their day-to-day navigation,” En Yi relates. “We hope to change that by creating a device that enhances their current ways of navigation, and detects upper body obstacles that often go undetected.” 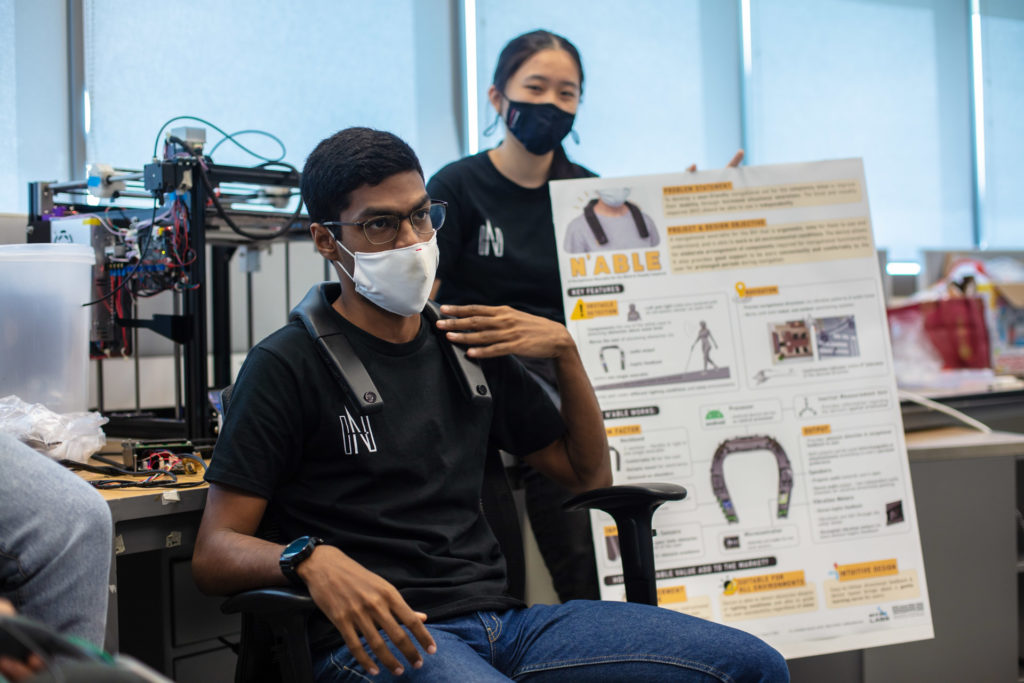 It detects obstacles with the help of ultrasonic sensors and alerts its users via audio and/or haptic feedback (users can toggle between them, or activate them both at once, with a touch of a button). 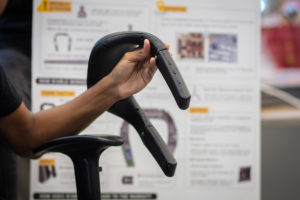 How it works is very straightforward. The various sounds and vibrating patterns have their own meanings. For example, the direction where they come from – left, right, or centre – is where users are supposed to move towards – or avoid.

Can’t visualise that? Let this video help you:

A unique camaraderie
The brains behind N’Able are a tight-knit team of six product and systems engineers – Zi Min, Huiqing, En Yi, Nigel, Bernice and Keith – who first met when they were still wide-eyed freshies back in their first year of university. 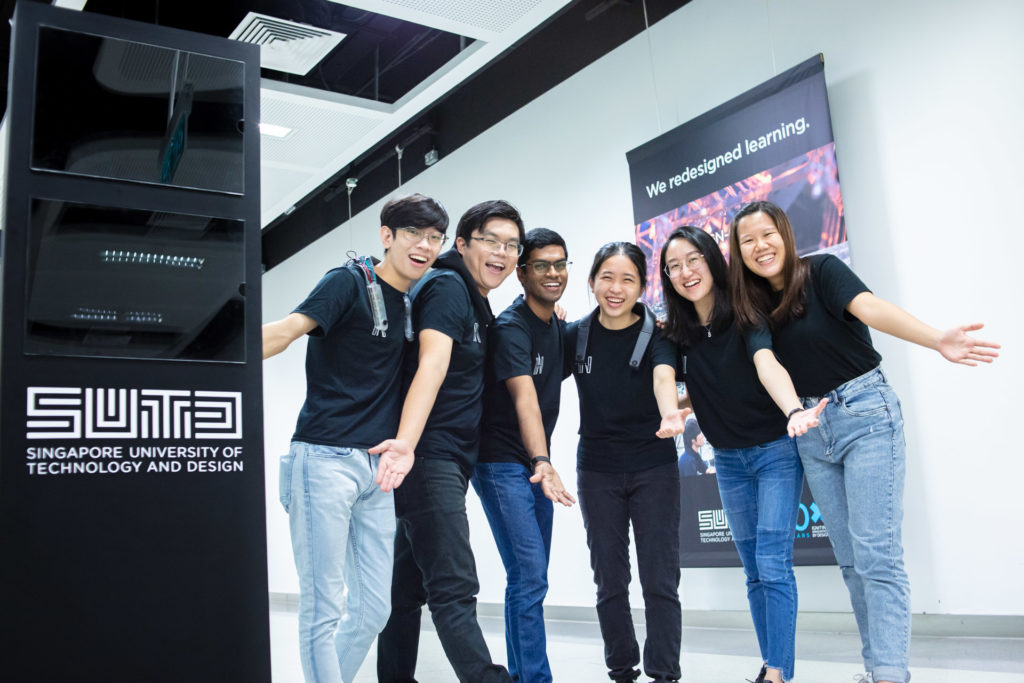 They were grouped together for a design competition organised by the Port of Singapore Authority (PSA) – a competition they won; with an unlikeliest design: “a really long stick with a brush at the end,” Nigel reveals as the team laughs at the memory.

Long story short, the team had to create a product that could clean hard-to-reach cameras for the PSA engineers. They came up with many high-tech ideas; but none seemed to triumph over the most pragmatic one of them all. They were glad they stuck to their guns.

This unique experience not only brought the team closer together; it also gave them an indelible lesson on “the importance of design thinking,” Huiqing highlights. 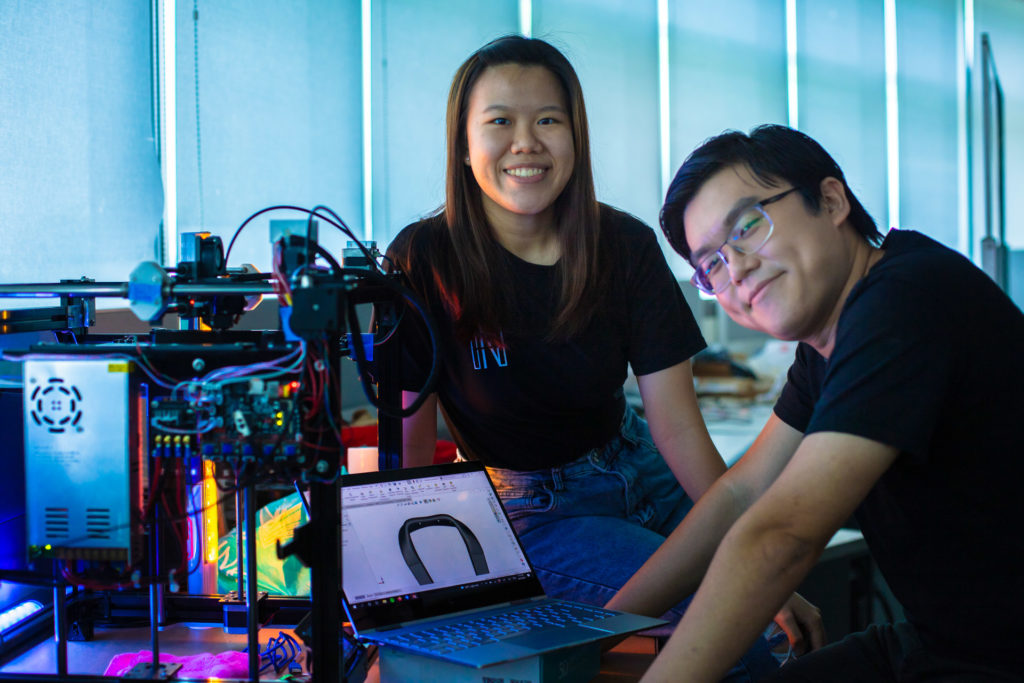 Guardians of design thinking
“As tech people, we have a tendency to design for technology because we’re so familiar with all the cool stuff out there,” Huiqing points out. “But at the end of the day, if you want your product to be useful, you really have to think about the user and the problem you’re solving.”

Zi Min agrees. “I appreciate that we are taught to apply design thinking right from the start,” she continues. “We do that for all our projects. And sometimes, it’s the simplest solution that works.”

As advocates of design thinking, it’s not surprising then, to see this philosophy reflected in the many aspects of N’Able’s design.

The sounds of audio navigation
One example is their decision to employ stereo audio instead of a newer spatial technology for their audio feedback function. 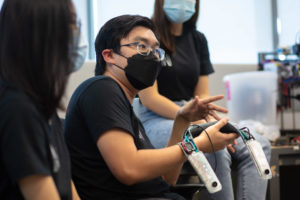 “Spatial audio is like the three-dimensional Dolby surround sound you get in cinemas, where you can tell exactly where someone or something is coming from,” Nigel describes.

This is cool technology. But in N’Able’s case, it might not be any more superior than the traditional stereo setup, where things are more straightforward – left speaker, left beep; right speaker, right beep.

In fact, they found the stereo option easier to comprehend, especially when earpieces aren’t used. That’s because BVI users avoid wearing them – they prefer to depend on environmental sound cues to get around.

That’s also the reason why speakers are used in N’Able’s design. 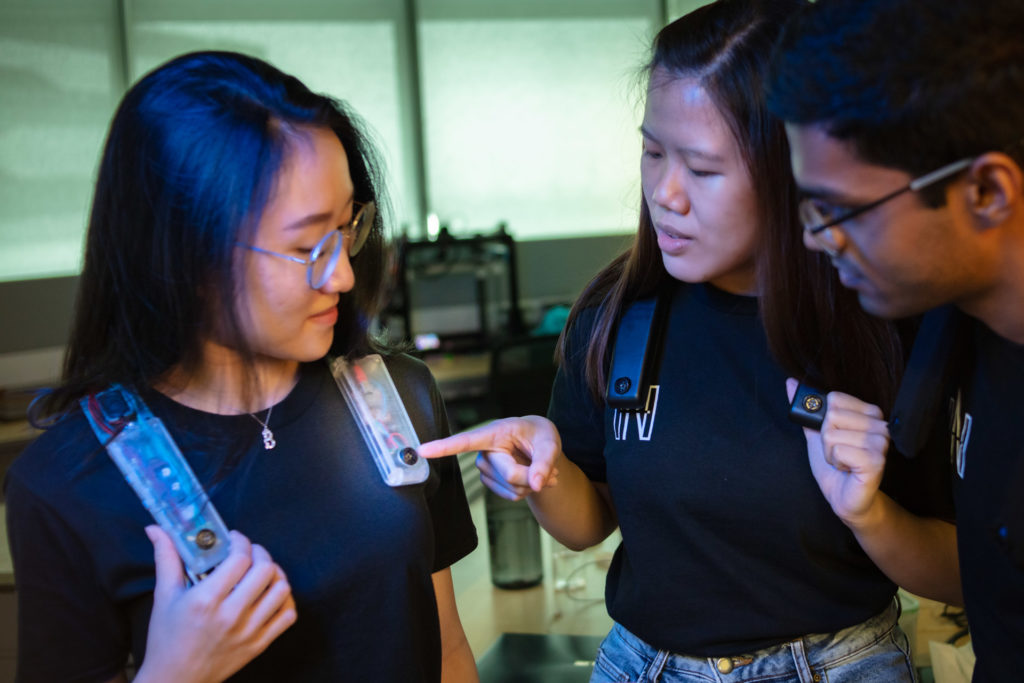 A user-centric design
“We base a lot of our design parameters on information we get from the BVI community,” Keith explains. “The last thing we want is to create something based on our assumptions, which at most times, isn’t a true reflection of what’s going on.” 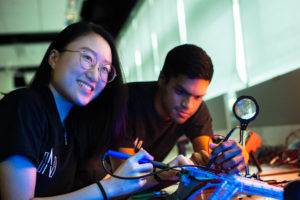 Bernice nods. “We were deliberating whether to create a system of multiple wearables, or just one whole piece,” she recounts. “But after speaking with the users, we realised it’s not easy for them to manage so many pieces.”

“That’s why we settled on this neckband design,” she concludes, gesturing to the prototype in front of her.

Form factors
Now, some of you may find this n-shaped neckband rather familiar. Well, that’s probably because you might have seen something similar – like the Bose SoundWear – a wearable neck speaker that’s also the source of inspiration for our team. “We want it to look like an accessory rather than a medical device,” En Yi elaborates. “Because like us, BVI users care about aesthetics. They want to look good in whatever they’re wearing too.”

On that note, Bernice points out that the device is currently a little on the bulkier side. But it’s an issue that will be resolved when its core processor (it’s a smartphone at the moment) is replaced with a smaller microchip.

An eye for every environment
So how does N’Able fare when put to the test? Why don’t we find out from the clip below?

Part of N’Able’s success hinges on its ultrasonic sensors – sensors that work based on sound waves – which can detect obstacles in a wide range of environments and conditions.

But they weren’t the only sensors the team experimented with.

They started off using LiDAR, but the light-emitting sensors didn’t do well with mirrors, glass, and low-light conditions. “This makes them unsuitable for indoor use,” En Yi explains.

Computer vision is another area they looked at. While it’s incompatible with N’Able at this moment, Keith is earmarking it for future consideration. “It has great potential to help BVI users visualise certain things, like bus numbers,” he says. “And that’s something they’re very interested in.” 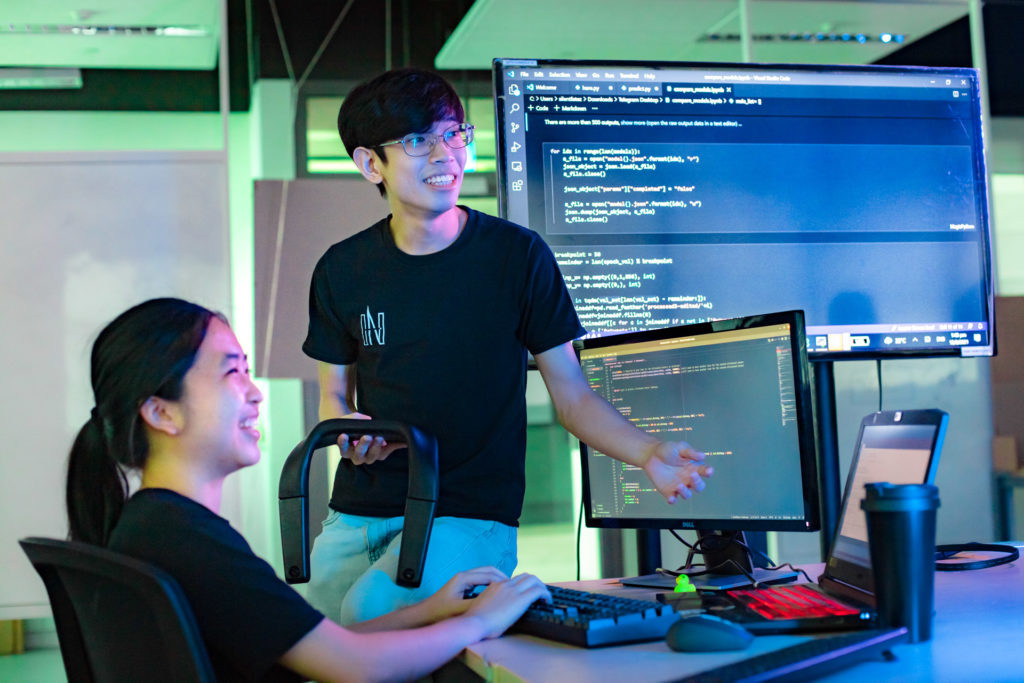 Navigating our world together
The future for N’Able is certainly looking bright. MyrLabs, the team’s industry mentor, has long-term plans laid out for it, with features such as an infrastructure-free positioning system and voice control in the pipeline.

“For now, we’re providing them with as much useful material as we can,” En Yi smiles. “Hopefully they’ll contribute to the final product!” Nigel agrees: “One good news is that the BVI users really liked our neckwear design. So we have that validated at least.”

As for the team, they’re happy they’ve taken this step to “help everyone navigate our world together.” 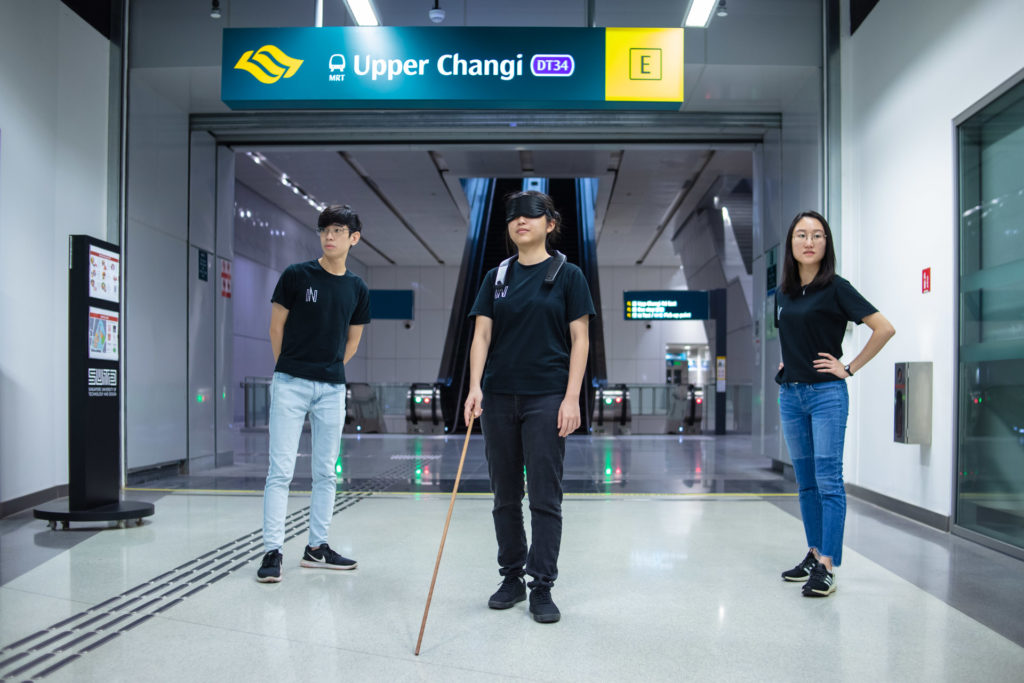 Have a query for our students and/or Admissions Team? Speak to them here!