After much assistance from the teacher assistant, our actuators could some what move. When i meant some what move, I meant like it was able to pass the video shooting stage, probably after much video editing was done to it.
Cool, so we are done with both courses in ZJU.  Special thanks and much gratitude to the teacher assistant though, helping us from start to end, almost as if she was part of our group…

Some of the ALP students have been involved in not only their own Theme projects but DIP too ( refer to other blogs titled DIP for more information ). From my brief understanding, DIP groups consists of some of the ZJU students and some exchange students from SUTD as well. Over the past few weeks, I have heard so much stories about DIP through my SUTD friends who are involved and today I finally get to see what is being materialised after weeks of sleepless nights and consistent self- learning.
Something really different I see in ZJU is that a lot of effort is put into presentation of their ideas. Based on our prior experience in 3.007, we needed to end off with a poster, a some what working prototype and a video placed in an exhibition format. On the other hand, in ZJU, students have to stand under the spotlight, on stage, in front of an auditorium of people they may or may not know to present their design and answer questions from the ground (on top of a prototype and video in place) . It looks like how Apple do their product launch — their presentations were so well- animated yet so professional which really put a touch of business – orientation in the products they designed.
Kuddos to all SUTD students in DIP especially those who have to present in front of the entire crowd with some Chinese involved. 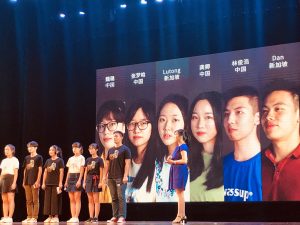 This week’s theme meeting further proof that teacher assistants here in ZJU are really the best. Breaking away from our routine of meeting our profession on Wednesday afternoons, our entire Wednesday was occupied with us brainstorming ( yet again ) but with the guidance of our TA, Hanbo :’)
Just when we thought we have been settled with the functions, form and interaction of our product, we were utterly wrong. Our TA said we should continue being open to more ideas especially given that the device we were initially settled on was not really space efficient ( recap:  its a nap assistive lamp to put it simply)
At that point I did not see what was so wrong with just sticking to the current idea and did not really see the purpose of brainstorming for the 3489th time. But our TA brought us through the really fun and magical design process and left me with a changed perspective on design. He brought out this marker set and many A3 papers for us to sketch our ideal forms the lamps should take individually. Presented our forms, and narrowed down to a few ideas to prototype with foam to test out the exact dimensions suitable for users. Note that during this whole process, our TA was with us in the classroom and even had lunch with us.
After several cads, foam cutting and fiddling with electronics by us, it was time to decide the user interactions of the product we have in mind. At this point,lets just say we all lost it. I mean, it was the first time our theme spent the entire day in the IDI ( tell tale sign that it is the first time spending so much time in the IDI is that we needed to key in the IDI address for our waimai delivery). As much as we have lost it, our efficiency spiked because our drive to sleep became much stronger.
So we quickly and decisively decided on the user interactions and wrote down a “ script” ( more like instruction manual for the device we are planning to design) which eventually had to be translated to a story board looking thing that I did again  ( yay designated comic strip writer)

The best part about having a late day was the fact that we had a meeting with the Prof in the morning the next day. YAY tired…but that aside, I was pleasantly surprised at the outcome of the day-long worth of brainstorming. We were indeed very restricted in our ideas previously and the whole brainstorming process Hanbo went through us really open up our possibilities for the design.

ANNNND we are half way through ALP with Recess week coming up. Let’s hope our trip to 黄山 goes well and I comeback in one piece :’)