My name is Martin and currently I am on a Design and Technology Experience together with my school here in China. Here is also where I am going to share more about my experiences, adventures and escapades. I hope to share some of the more interesting experiences and adventures my friends and I go on and penning down some of the thoughts I have while I’m here. Hope you guys enjoy!

Firstly, a brief introduction about myself. I am a second year student (recently completed year 1 at the Singapore University of Technology and Design (SUTD). The exchange I am on is a collaboration between Zhe Jiang University in China and SUTD. It aims to expose students to the possibilities of technology and design through collaborative projects between students of both universities. The project that I will be working on is to Measure Customer’s Satisfaction with Brain Signals, which to me sounds like an extremely daunting task, but more to come on that when we begin working on the actual project. Some of the things I enjoy doing would be playing sports, reading and exploring different cultures which will probably influence most of the activities that you will see here! Without further ado let’s get into it!

On departure day, I experience a mixed set of emotions. On one hand, I was really excited, having been given the opportunity to place myself in a completely new setting (the first time I have been away from home for a relatively long period of time) and on the other, leaving the comfort of my friends and family, was slightly unnerving. Being this long away from home, I felt a sense of homesick even before I’ve even left home. Nevertheless, the thought of being able to explore a new culture, a new setting and meeting new friends kept me anticipated.

Upon reaching Hang Zhou, we took the bus over to ZJU and had the first look at our dorms, the place which we will be staying for the next 14 weeks! To me, it seemed huge and had kind of the hotel feel to it, also the bed was really comfy, nothing like any of the dorms I’ve seen back in Singapore. Also, the campus area is

huge. The students told us that this is 1 of 7 campuses that ZJU has, and its already massive! Surrounding the area are 4 canteens that all serve different foods, 26 basketball courts, 2 400m tracks, a garden area and so much more. The best part is, the food street is literally 5 minutes away from where we’re staying (man am I gonna get fat). We took the chance to bike around the campus area (mainly the garden area) just to familiarize ourselves with whats around us.

Speaking about convenience, Alipay is an amazing app. IT. HAS. EVERYTHING. From your bus and MRT card, to paying for almost anything, to investing in stocks. Shopkeepers choose to to accept cash and instead opt for Alipay instead. We sometimes talk about an all-in-one app to concentrate everything, this really is it. I am still amazed how everything is with Alipay. It kind of makes me wonder how come other countries haven’t adopted such a system, I mean we always talk about increasing the ease of access to all our apps, but yet besides China, the rest of the world still has phones loaded with different apps. Bike sharing apps collect payments via Alipay, packages bought from TaoBao can be tracked from Alipay, DiDi (The Grab of China) puts their service up on Alipay as well. It really is a wonder how the Chinese population was able to adopt this method, so quickly, the only problem is that its becoming hard to track my spending, whoops.

The selection of food here never ceases to amaze me. Their 4 canteen’s carry food from so many different cultures. From Western Spaghetti to Korean Hotpots, to even having the standard buffet style choices of food. The food street on the other hand has so many local cuisine. Chive pancakes, duck innards, nian gao, this small form of pekking duck, and of course Mala and Bubble Tea. Although the food is slightly saltier than of that in Singapore, they still taste really good. I’m looking forward to trying more and more and more food from all over China! I think my Bubble Tea count within the week is currently 5, so let’s see how many more I can drink.

They University also allocated us time to visit some companies to introduce us to the possibilities of future research and development in China as well as possibly inspire us to come up with new ideas. The idea of an open workplace was always very enticing to me, but being able to see it in person for the first time was something different in it of itself. They had all the amenities close to them, be it a gym or a meditation area, and even an open concept not binding the workers to a single cubicle was something really interesting. Furthermore, they displayed some of their successful products that have been released into the market which really displayed China’s real innovative prowess. Some really inspiring stuff.

Throughout the week I also took the chance to visit some of the famous sites around the Hang Zhou area. First was 西湖, West Lake which is the cenral lake of Hang Zhou. Being out there in the open lake, with the cool weather was relaxing and really gives you time to think about things on your own, overall a very calming experience. We also walked along the river and took a trip up the 雷峰 Pagoda. Inside it tells the story of 白素贞, a mythical being of Buddhist folklore.

Next we were taken on a urban development tour by our ZJU buddies where we visited 武林广场, Wulin Square, where previously people would gather around as sorta like a meeting place for activities, but due to redevelopment, it became like the central square surrounded by office buildings. Next was 京杭大运河, the Grand Canal which spans all the way from Beijing to Hang Zhou (approx. 70km). What’s amazing is that is was dug solely by humans without any machinery, truly a feat of human willpower. Finally, we were shown the former building of the Ministry of Education that had been re purposed into a museum that describes a short portion of the architectural development of the country. That day we also had an interesting lunch where we tried out some ‘new’ and ‘exciting’ food together with our buddies. Below you can see what we had to eat. 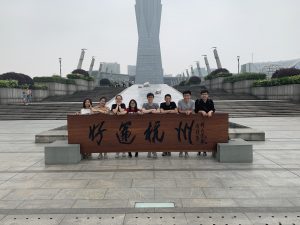 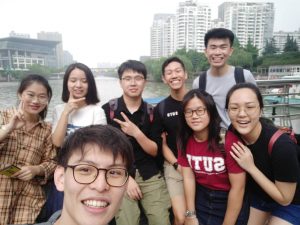 Finally, at the end of the week we took a short hike up to where we had the opportunity to try their homegrown tea! The hike on the way there was marvelous, being able to see the rolling hills and acres of growing tea leaves, something you really cant experience back in Singapore. The tea was also pretty interesting, instead of being served already brewed in a teapot like back at home, they serve it in a cup with the leaves fresh and then pour boiling water in, which had a different taste compared to that of Singapore. 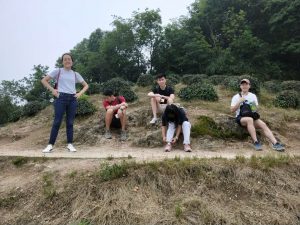 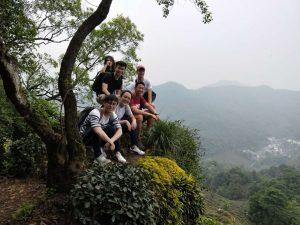 Overall, it truly was a week of exploration and discovery. Being introduced to new a new environment with ahem certain restrictions. Being able to see new sights exclusive to China and being able to try new food and interact with new people. It’s been a great week of firsts and I’m looking forward to the next few!