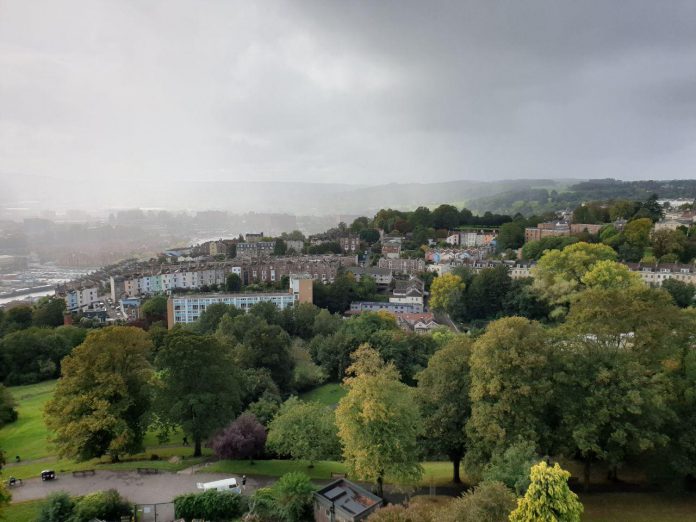 Hey everyone! Just a quick introduction: I’m Zhi Xin, an EPD junior on exchange in the University of Bristol. I’m currently the only SUTD student in the UK this semester, so you’ll be hearing from me a lot.

So in this first post, I’ll be covering Freshers’ Week in Bristol. It was a wild week filled with events and way too many administrative matters, and it’s definitely worlds apart from SUTD’s orientation week. I did promise a list in my clickbait headline, so here you go.

“But I’ve seen rain before in Singapore too!”

I swear, it’s not the same. I’m not sure what I expected when I arrived in the UK without an umbrella, but it definitely wasn’t a downpour on the very first night. It’s been raining every day since then, so I’ve gotten into the habit of snapping a quick photo on the rare occasions I see blue skies.

SUTD’s orientation generally consists of three days’ worth of preplanned activities. It’s different here in Bristol; the Students’ Union (also known as the Bristol SU) organizes different events which freshmen could sign up for. Other than the club nights which I’ll very fondly discuss in #3, they had various mingling events targeted towards different groups – such as exchange students, disabled students, LGBT+ students, mature students and so on.

It’s fantastic. The concept of giving students a space like this to meet other people who might be facing the same challenges or issues as them – it really should be the norm. Of course, the University of Bristol has a much bigger student population compared to SUTD, so these sorts of targeted mingling events would work better here. Other than a weeks’ worth of mingling events, the Bristol SU also provides other forms of support for these students in the form of societies, so this functions as a continuous support system for these groups of students.

Let’s move on to the more lighthearted part for a bit. Other than the activities in the day, Freshers’ Week in Bristol also includes nightly raves – yes, every night, from Sunday night to Thursday night. After a lethal combination of alcohol and FOMO I found myself at my first Freshers’ Week activity on Sunday night, standing in the line at SWX.

Incorrect. SWX isn’t your run-of-the-mill club in Singapore. For starters, they have a big band playing. Here’s a video of the Bristol Hornstars playing at SWX:

I’m a sucker for old school jazz and swing, so this was right up my alley. The music is somewhat similar to Postmodern Jukebox’s – groovy, catchy covers of both hits from decades past and modern pop songs. This probably isn’t something you’d see in Singapore at all, so I found it pretty interesting.

Other than a live big band, something I enjoyed about the clubs here in Bristol is the sheer variety of music you get. The alternative music scene here is massive – clubs play music from dubstep to RnB to punk – so I’m really looking forward to checking it out!

Music aside, I did have a lot of fun hanging out with my friends and meeting new people at the parties and I’d definitely recommend Bristol to those who enjoy immersing in the nightlife of a city. (-:

Freshers’ Week ended with the Welcome Fair on Friday. The Welcome Fair is, in essence, the same as SUTD’s Fifth Row Showcase – except with a ton more societies, as well as rain and mud. The University of Bristol currently has about 400 societies. It’s crazy, I know – SUTD has just over 90.

Other than the standards sports clubs and performing arts societies, there were some societies in Bristol that caught my eye – such as the Pokemon society, the Nerf society, and the IKEA society. I didn’t manage to find out what these societies do, but they were definitely very intriguing. Here’s a quick glimpse of the Pokemon society during the Welcome Fair:

Freshers’ Week has really been an eye-opening experience for me. Going from a short 3 to 4 days’ orientation with everything planned out to a week of such diverse activities and events – it’s wild and overwhelming, but it definitely was a week to remember.

In the next post I’ll (probably) be covering the city of Bristol and the dorm I’m living in. I’ve also started classes, so look out for  some musings about the modules I’m studying here!