Hi there! You might be wondering, ‘Wait a minute, why is there only 1 post from this person so far?’ Well, truth be told, I had been having so much fun in China that time seemed to have lost its hold over me. Before I knew it, 3 weeks in China have already passed 🙁 But fret not, because, in this post, I would be bringing you through a recap of ‘the mysterious disappearance of my 3 weeks in China’.

Being a mega (literally) foodie myself, I naturally looked forward to savoring the plethora of street food Chinese cuisine has to offer, each a hallmark of the region of China it represents. So, expect to see quite a number of food pictures in my upcoming posts 🙂 Typical of Chinese street food found in Chinatown, many would be familiar with names such as 麻辣锅，饺子，小笼包，炸酱面，and etc. While I would love to try them all at once, the canteen (this is just one of the many canteens available in ZJU’s biggest campus) does not offer all these as part of their breakfast options (unsurprisingly though, you can find them all in said canteen during the lunch hour). Nonetheless, I managed to get myself some tasty 饺子 for my first meal in 杭州 Hangzhou.

The same afternoon, we went to visit The 2nd World Industrial Design Conference (WIDC) in 良渚 Liangzhu town, Hangzhou. The exhibition, which was really interesting, featured some of the coolest industrial design projects China has to offer. We were also shown some pretty advanced 3D printing technologies widely used in many of the industries and current industrial projects in China. After witnessing these, I personally feel that Singapore is still a newcomer in the global industrial scene of additive manufacturing.

But the coolest takeaway from this has to be interacting with 小米’s 小爱同学, an AI.

What’s a trip without a hike right? That is exactly we did as a project theme. Funny thing was we started initially with the aim to conquer the 12 km route from 灵隐寺 Lingyin Temple to 虎跑山 Hupao Mountain but somehow ended up at 六和塔 Liuhe Pagoda because we keyed in the wrong destination in our Amaps App. Nevertheless, it was a blessing in disguise as we bonded over the hike, got to know each other better, and enjoyed the breath-taking view the 30-minute trek up to Liuhe Pagoda offered. A hidden gem indeed.

Before I came to Hangzhou, I told myself that I should take this opportunity to travel around China since I would be in ZJU for 3 months. Thus, my first travel destination out of Hangzhou has to be 上海 Shanghai since it is the nearest major (province-level) city. It was my first time in Shanghai, and it’s literally my ancestor’s land since my grandfather is Shanghainese. Seeing these buildings really reminded me of the 老上海 I have often heard of/seen on TV – as if what was on TV came to life. It was almost love at first sight as I soak in the view of this cultural artifact, this relic that transports me back to the past. Almost.

Finally, the highlight of our Shanghai trip has to be the food here. Our trip consisted mostly of walking from one food destination to another; sampling a particular Shanghainese street food to another. The primary objective of this trip was the patronization of Canton 8, the world’s cheapest 2 Michelin star food; food that is of ‘excellent cooking, worth a detour’. However, we felt that the food, while good, did not stand up to the 2 Michelin star accolade it was conferred upon, because it gave us less of the ‘wow factor’ when compared to the 1 Michelin star street food I had eaten in Bangkok, especially not for the price I am paying as well (even though it is the world’s cheapest). That being said, however, you are allowed to be jealous and even salivate as you scroll through the pictures:

Towards the end of the week, things got more interesting altogether:

I vividly remember how I barely touched any of the Adobe Creative Cloud Apps, especially Adobe Photoshop, Illustrator, and Premiere Pro during 3.007 (I was focussed more on product development anyway), and so it came as a surprise to me when I found out the relative ease of using Adobe Illustrator, as seen in the design of our product’s logo and slogan. We also had to put together a 15-sec video about our product, which (unsurprisingly) did not take too much effort at all.

We were shown around ZJU’s CAD & CG Lab, which showcased some of their latest projects between computer and human interaction. I guess this was the best showcase so far just because it gave us a glimpse of how the future might be. My favorite had to be the immersive VR experience, because it was something I had not really experience before, and I believe it is as close as we can get to being actually inside a virtual world for now (in terms of sight and sounds of course). They replicated the environment so well that I almost thought I was at the place itself.

The week was concluded with a visit to Tianducheng, a.k.a ‘Paris of the East’. Stepping into the place gives one quite the feel of being in a French village, especially because the streets are adorned with French neoclassical-style buildings. Although I felt that the Chinese words on these buildings could have been done away with, it is as though the Chinese words serve the purpose of reminding people that it is still a Chinese ‘rip-off’ of the real Paris. Funnily enough, it also reminded me of how most things in the world now are branded with the ‘Made in China’ label, and this place is no exception to it as well.

Finally, the main attraction of Tianducheng: the ‘Eiffel Tower’.

We were brought to China Academy of Art (Xiangshan Campus) to be immersed in a rich arts, culture, and design experience within its campus.

First off, the architecture and design of the campus buildings are all so inspirational, as if it is there to remind and motivate the students. Furthermore, the surroundings of the buildings are particularly calming, quaint, and alluring; they remind me of what the scenic views that were portrayed in ancient Chinese movies I used to see on television. True to its name, the buildings and its surroundings were tastefully and artistically constructed in a way that is reflective of the rich Chinese culture and heritage. 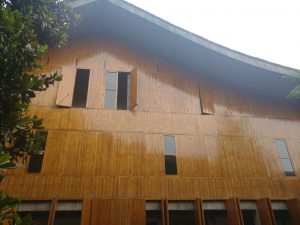 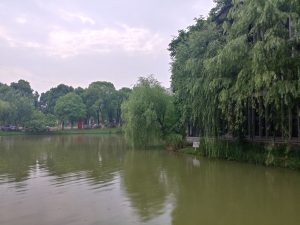 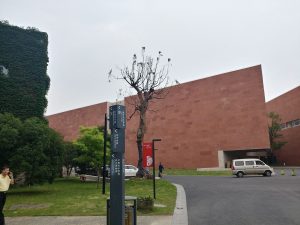 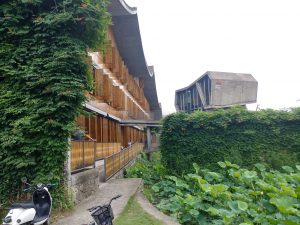 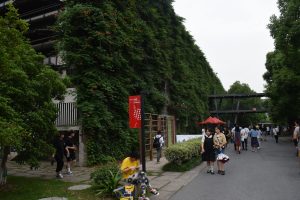 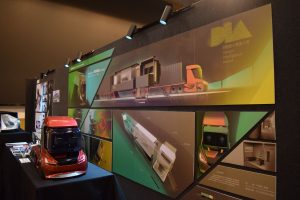 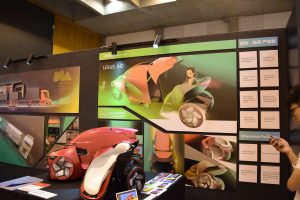 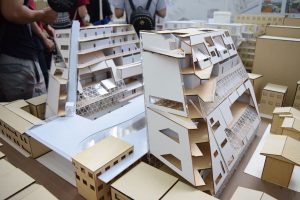 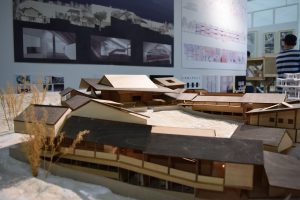 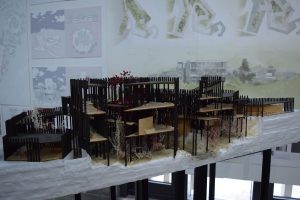 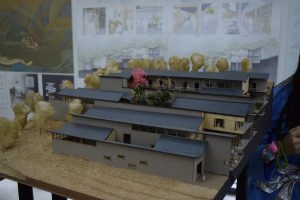 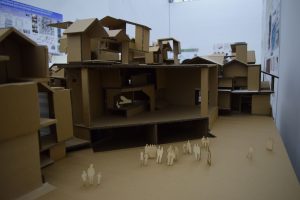 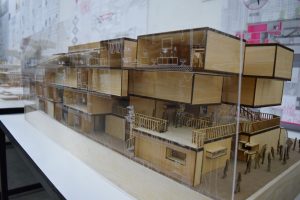 How could any mention of Hangzhou not include the world-acclaimed Xi Hu of Hangzhou? As I was part of the last batch of students to arrive to Hangzhou for ALP, I had missed the buddy day visit to Xi Hu. Because of how iconic Xi Hu is, it would be a lie, almost, to say that I’ve visited Hangzhou without visiting Xi Hu – what more to even mention that I stayed there for 3 months. The scenery around Xi Hu reminds me somewhat of palace backyards with huge lakes during ancient times commonly portrayed in the all too familiar 武侠片 martial arts films. The architecture of the buildings too, are all constructed with a common theme in mind to fit the scenery. We would probably need at least a week to explore everything around Xi Hu by foot, but at least I am familiar with Xi Hu enough to bring my mum around later when she comes to visit. 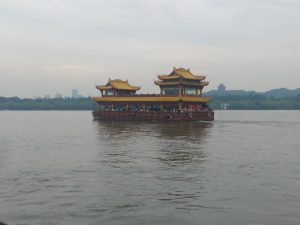 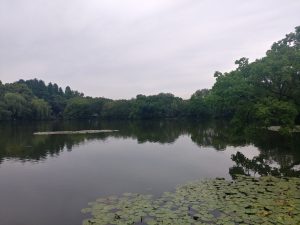 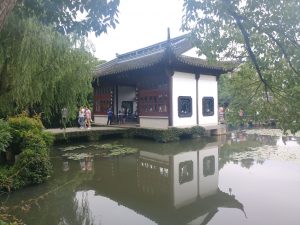 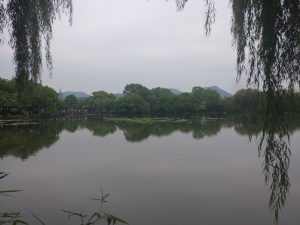 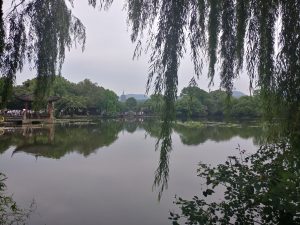 The tastiest 臭豆腐 smelly tofu I had eaten in China so far was near Xi Hu, her exact location undisclosed because we were led by its smell rather than by sight. A good smelly tofu, as my more experienced (I had never tried it prior to this trip) friends had shared with me, is one that you can smell it before you even see the stall. And we almost missed it, because this unassuming old lady was managing her humble set-up of a stall in one of the small alleys, just outside where she stays I assumed. You know its legit good food when you see charcoal as the source of fuel for the burner used to heat up the wok of oil. The fried tofu can then be dressed up in a choice selection of accompaniments which customers are free to take however much they want. Aside from the standard usual spring onions and chili paste, there was another sauce provided which is more commonly seen elsewhere in road side 小吃 street snack stalls like Taiwan, Malaysia, Hong Kong, and maybe even Singapore, but not so much in China from what I’ve observed. Its taste is very familiar, almost like the chee cheong fun sauce we are used to but it is more like its saltier sibling.

It’s sad that I have to end here while you were engrossed with my recap, salivating at my description of the smelly tofu I had but as we all know, good times always have to come to an end. While this might be the end of my first recap post, I am currently planning for a second recap post, so stay tune!

P.S. Fun times do not have to always come to an end after all heheh