Singapore is known for its all-year-round summer and sky-high levels of humidity, and these conditions are often said to not be the best for rock climbing whether on plastic or on rocks, but what happens when you actually embrace the humidity and infuse climbing with a little bit of splash? You get CRUX 2017! A team of students from Singapore University of Technology and Design (SUTD) Climbers was formed about 2 years ago with the intent to impact the local climbing scene by pushing forth deep-water soloing (DWS). The committee was led by Engineering and Product Design (EPD) senior Ronald Yeung Long Yu.

Climbing competitions are definitely not foreign to the climbing scene in Singapore, with bouldering competitions organised by the various universities peppered across the year such as NUS Boulderactive and NTU Pumpfest to name a few. Yet, the team wanted to make a difference, to switch things up in the yearly competition circuit, and thus came up with the idea of organising not just a climbing competition, but a deep-water soloing competition. Unlike bouldering where crash pads / crash mattress are lined at the foot of the wall to cushion the climbers’ fall, deep-water solo climbers can only trust the deep waters beneath them to break their fall, whether the open waters of the sea, a lake, or a manmade pool. Like bouldering, deep-water soloing does not utilise ropes or harnesses. There have been various deep-water soloing competitions in the global climbing scene such as the famous Psicobloc Masters Series in Utah, United States of America, or the more recently-established Spyder Han-gang Climbing Championship in Seoul, Korea. CRUX 2017, however, is certainly the first deep-water solo competition not just in Singapore, but in the Southeast Asian region. SUTD Climbers is proud to have organised this competition in partnership with Sports SG and the Bishan-Toa Payoh Youth Executive Committees (YECs), in conjunction with GetActive! Singapore.

CRUX 2017 spanned across 4 days, from the 5th to 8th August 2017. It was held at the Toa Payoh Swimming Complex (Certificate of Excellence) with the wall built by Climb Asia and routes set by Felicia Lim and her team from Climberique or Gorilla Climbing Gym. The first day of the event saw climbers from the Intermediate Men/Women and Open Men/Women categories fought it out in the qualification rounds. Climbers were scored by their high points (the highest handhold) that climbers were able to reach, in the fastest time. For many, it was their first experience deep-water soloing and it was interesting to capture the different faces and phases of emotions that the climbers displayed throughout their climbs. For some, the triumphant face after topping the climb was only followed by expressions of slight fear and surprise when they realise how high up from the water-surface they had climbed till, and how far down they had to jump; for others, jumps down into the pool only reinforced their joy, excitement and psyche for the climbs ahead. Moreover, the rules were such that an instant disqualification would be given to any climbers who refused to jump down, so all climbers had no choice but to jump into the diving pool, regardless. Unlike the other competitions, the 6-metre high wall that towered over the diving pool was open to climbers to try post-competition. The period of free climbs allowed climbers who did not top the route to re-attempt the blocks and it also encouraged the trying of different betas (ways to climb a route) and just to let everyone have fun in the sun with one another. In addition, all the while, the 4.5-metre boulder tower and slackline were open for all climbers, audience and members of the public to try and have fun on!

Slacklining is a fun side-activity that is often paired with climbing, and it is the act of walking or balancing along a suspended length of flat webbing that is tensioned between two anchors. The boulder tower erected right beside the 6m high wall had four faces, one of which stood over the waters of the diving pool. Throughout the day, and especially post-competition, the climbers were having fun together either climbing on the boulder tower, attempting to balance then falling off the slackline into the water, or simply splashing around and sharing the infectious good vibes that hung in the air.

The second day began with exciting rounds for the Intermediate and Open Women finalists – the top 8 from qualifiers. The audience and supporters certainly felt the heat of the competition not only because of the scorching sun, but because of the many neck-to-neck climbs as the finalists raced against time while maintaining composure and accuracy, executing every move with precision. The falls into the inviting deep waters below the pool only made things more exhilarating. Among the Open Women finalists were foreign talents: Thai climber Puntarika; as well as Tiffany Soi from the UK, and of course, accompanied with local favourites who are not new to podiums and finals in climbing competitions: Vanessa Teng and Judith Sim as well as many other strong competitiors! The palm-sweat-inducing climbs ended with Puntarika bagging the first prize, followed by Tiffany, then Vanessa. 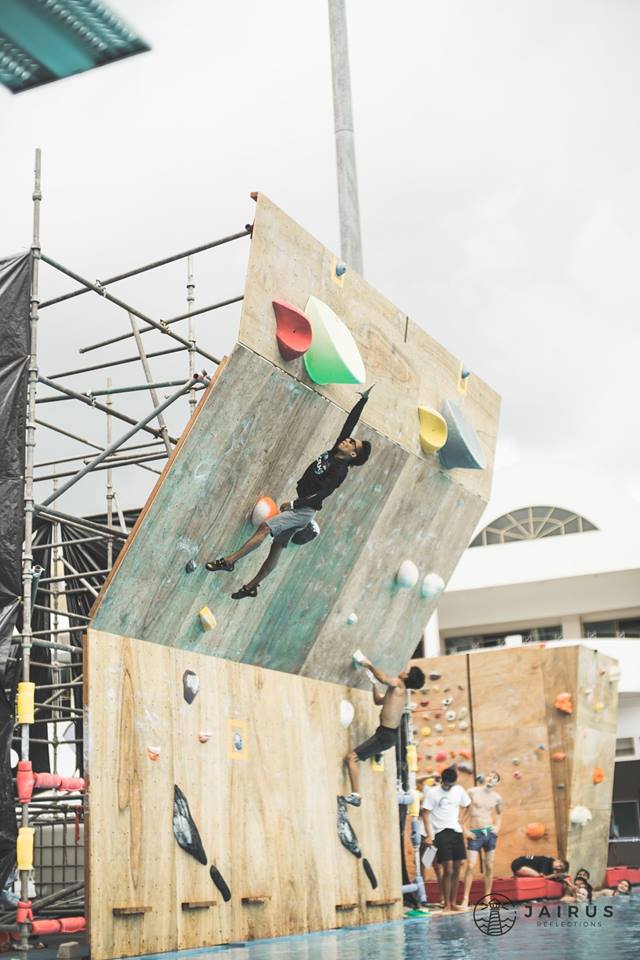 Next up were the final rounds for the Intermediate and Open Men finalists. The atmosphere was getting so heated and the chlorine-filled air intoxicated the spirits of climbers and audience alike – with elation and energy. The competition was lined with unexpected falls and jumps, sudden slips and catches which all amounted to a spectacular show that captured the attention of not only people in the climbing community, but also some audience from members of the public. The carefully and calculated jumps set by the routesetters allowed the Open Men finals to live up to its expectations, being the highlight of the day. The competition concluded with Thom Arnold attaining the sought-after 1st-place-finish, followed by Latif coming in 2nd, and Emmanuel Ryan Paul coming in 3rd. However, regardless of the wins and losses, all the climbers were ebullient and wore smiles on their faces.

Just as it was on the first day, post-competition saw the climbers and even non-competitors jumping into the inviting blue waters to cool down from the sun, and simply to embrace the effervescent mood that washed over everyone present at CRUX.

CRUX 2017 then concluded with the team event on the third day of the competition. 13 teams of 4 battled it out with 3 routes – 2 on the boulder tower and 1 on the 6-metre wall. The teams that continued battling against time and the climbs entertained themselves with accidental falls and laughs into the waters. At the end of the climbs, the queues to try the routes again were endless, and even as the tiles collected a grimy combination of chalk and water, the climbers were relentless in their attempts. Some ambitious souls even attempted the Open Men finals route that was on the left side of the 6m wall. The post-event “pool party” certainly seemed to bond climbers together, doing activities that everyone enjoyed and cheering each other on. There was an instance where the blue floating mats were lined across the breadth of the diving pool and the climbers took their turns to run across the mats before sinking into the pool. All this happened whilst other climbers acted as connectors between the mats. This scene was so pleasing to watch, and the sparkle in everyone’s eyes made it hard to deny that fun was something that everyone was having that day, regardless of institutions they were from, and regardless of climbing standards. CRUX 2017 not only surpassed expectations in bringing a niche form of competition climbing to Singapore, but also introduced a new way for climbers to bond, have fun, and make new acquaintances over — not drinks — but over the cool waters of the Toa Payoh diving pool.

Check out the video highlight of the event here: