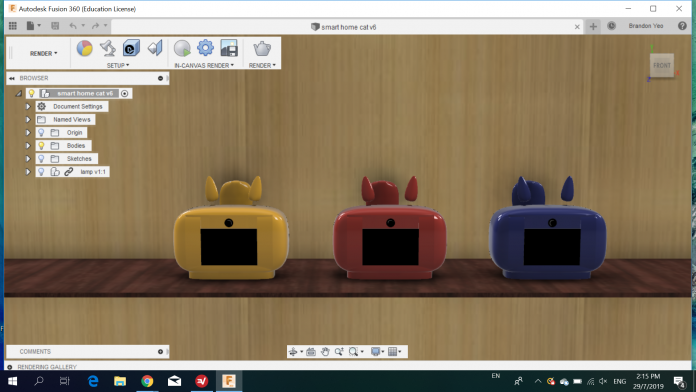 This week is all about grinding for our theme project. I see many groups spending their nights at the work spaces and classrooms and I guess that is what happens when you combine ill-preparation of time with a demanding project. However, there is still a lot of fun when we all come together and work on the project.

For most of the days, it was just a constant routine of meetings and cadding on my part. Waking up early to start some 3d prints, make adjustments to the prototype and rendering the different components. As seen in the picture above, our prototype will look like a cat, the signature animal for Taobao called 天猫（tian mao). We hope that this project will be able to sense and detect a user’s emotions and output various selections of songs, movies and activities that corresponds to their current mood. This is also known as affective computing and we hope that the end result will be something promising.

However, with work, there must be some play involve and this week, we played board games and cards with each other and we also went out for an escape room adventure. The room was pretty challenging and the clues being in Chinese made the difficulty increase by a notch. However, we were able to finish it and we had a pretty enjoyable time.

There isn’t really much to talk about this week because everyone is rushing out their final items so yea… this week is going to be a short one, at least for me.