This week was the start of lectures and lessons for our Origami Robots course. We were a little taken aback by the lesson’s style because it was in mandarin and most of us, who are also chinese, could not understand the lesson properly. We adapted after a while but an interesting point she raised was she found that we were lively during breaks or after classes whereas she found that their local students will be busy away ‘socialising’ on their smartphones. After 2 weeks in China, I have also realised this to be a serious issue where many people are literally glued to their phones that even public subway stations or malls have announcements to remind passengers to not to look at their phones while walking.

Back to origami robots, this course has similarity to Introduction to Design module back in SUTD. Although we had to code to make the robots ‘move’, the instructors and lecturers were more focused on the emotional and deeper meaning behind the actions of these origami robots. Every action needs to represent something more than just the movement. The lecturer emphasizes that as designers, we need to design the intention to aid users in using their products. For example, the owl origami could wake up when you enters the house or shows excitement through rapid flapping of its wings when you approach closer. This emotions behind are more important and intuitive for users rather than using words to explain the movements.

After our tour around the school last week, we planned a 3 days worth of activities to engage with the students at HuShu school hopefully to teach them something. Our first trip was a split lesson of origami folding and baking. I was involved in the origami folding part of the lessons and we engaged with students aged 13-15 while the other half learnt baking. All of us had no experience working with special needs children in the first place, and on top of the weak grasp of mandarin, we were lost in the beginning. Some of them could not speak while the others could not express their emotions and thoughts freely. It took a while before we could understand some of their disabilities and got to understand how to communicate with them better.

We realised that it was an impossible task to teach them to fold origami like normal children so we got tips from their teacher and got them to help us press down certain creases or hold onto the strings while we braid so that they could have certain contributions to the handicrafts as well which gives them a certain sense of accomplishment. Their way of teaching patience they have with the students to guide them is really respectable. They do not just spoon feed them but also lecture them off when they do something wrong. Before we left, we made each of them a friendship bracelet and cupcakes for them and the teachers. We were also given the advice to not focus so much on the process but just to interact and have fun with the students instead which we seek to improve next time. Overall, it was a great first time there and we will look forward to interacting with kids from other age groups during our next couple of visits! 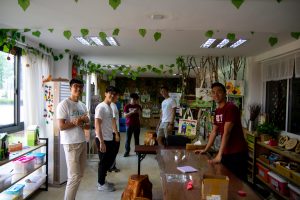 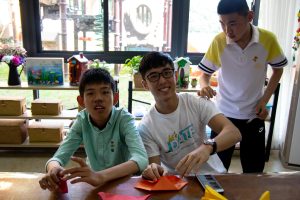 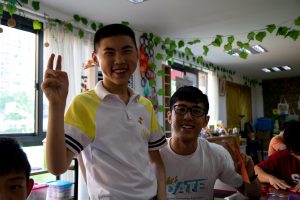 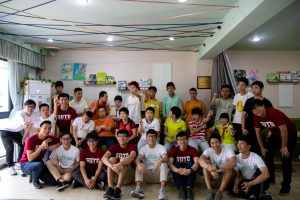