This week is a more fulfilling week, with the projects getting more momentum, I start going into more technical stuff in the various projects that I am involved with. Of course there is also CIP that we did this week which is always as interesting as it has always been.

On Monday, we had to showcase the basic origamis that we made as well as some simple movements that we attached to the paper. I was amazed after looking at the various groups’ products on the many ways one could bring life to a simple piece of paper. The extent to which it mimics life-like movements were also varied using different areas of motion, different speeds during the motion, attaching lights within the origami, etc. After the showcase, we had a mini class where we discussed amongst our groups and the professor guides us along on how we should further improve our basic origami robot. We decided to work on a cobra in the end where we have a simple base origami and try to make it more lifelike by making our motion more detailed and more natural.

On Tuesday, it was mostly spent working on the DIP project. I learnt on Monday that there was going to be a graded presentation on Thursday and that we need to push out a working demo by Thursday. Thus I was tasked to set-up the communication between Unity and Arduino, where the final product should aim to use leap motion(a hand detector in Unity) to allow users to control the interface of a UI through hand gestures and in the meantime, change the lighting and wind around the users hands through the use of Arduino to set-up the mood while the user uses the product. Luckily there are a few tutorials on how to communicated to an Arduino through Unity which allows me to manipulate the lighting and fan speed as the user presses buttons in the UI. 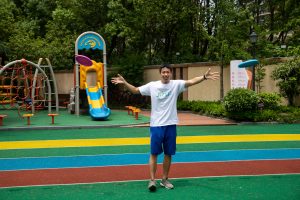 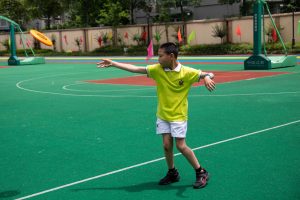 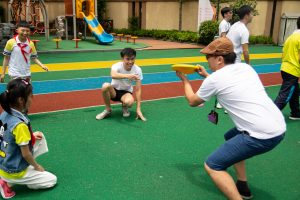 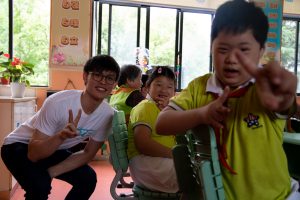 Wednesday is CIP day! The 12 of us went back to visiting the kids in 湖墅学校 and the lesson plan was to teach them frisbee! On the day itself, when we first arrived, we were quickly notified that there was a change of plans. That instead of going to the field to teach the kids about frisbee, we were to join them in their class for the 1st period before going to the field as their community leader was coming to visit. It was unexpected at first but we quickly adapted to the change and tried our best to support the teachers there. We were split into 2 classes, in one class there was no teacher so we had to come up with a lesson plan on the spot, while the other class has a main teacher where we helped the main teacher as she taught the class. Luckily we had previously planned for an English class for the kids, and now it came into good use. Of course the class was much harder than we thought was possible as our level of Chinese is not good enough to communicate effectively and that the kids being special needs kids have a short attention span and doesn’t give us as temporary teachers the kind of attention needed to teach the class. In the end although we weren’t able to teach English as well as we thought we could, at least we exposed the kids to some English which maybe at some point in their life it will help them out. After the class, we brought them to play frisbee! The kids had a lot of fun running around and throwing the soft frisbee that we brought. Although they were unable to comprehend the competitive playing game rules, at least we managed to teach them how to throw a frisbee and have fun with something as simple as a disc. Overall it was a fun and fulfilling day and I believe the kids learnt a lot and had a lot of fun while learning.

On Thursday, it is back to origami classes. We had our weekly origami lecture and origami group discussions. In this week’s lecture, there is a stronger emphasis on the different actions our origami robot can have and how we are going to design these actions. They made us graphically show the range of motion our robot can have and by drawing an action against time graph, we can specify exactly how the robot moves within this time frame. Thus in the second half of the class, we split into our groups and with the help of some cue cards, we each tried to make a short story of our robot. Then from that story, we had to make out the specific actions our robot takes and exactly how the speed and motion changes based on what we deem our origami robot is feeling. For example, something attacks our origami robot, does it shiver in fear or does it fight back. This exercise helped us define the character of our origami robot and thus allowing us to draw our graphs to a more detailed extent. The assignment this week is to come up with 30 specific actions for each robot and to present them next Monday.

On Friday, I worked on the origami robot assignment. We asked the teaching assistant to help us print out a new set of origami paper with guidelines that is larger than our original such that we can add more servo motors onto it. She printed for us on Thursday night and we installed the motors on Friday. After installing the motors, we also planned out the 30 actions that we need to have the robot do and worked on quite a bit of them. For this assignment we needed to plan out the movements of the robot in a graph and then translate our desired movement into reality before filming it down and putting it all together in a powerpoint. On Saturday, I went with my theme people to an expo called the Future Life Expo. In this expo, there was a showcase of many technologies that uses AI or are new innovations. I was particularly amazed by the showcase of a transport system ran completely by small robots moving by reading the qr codes on the floor. Such a system seems to be much more complex but a lot more modular as well as being flexible to changes. There was also a screen that automatically fits a certain costume on an individual which certainly could be used in clothing shops where users don’t have to try on the clothes themselves anymore. After which we had a wonderful lunch at a restaurant called 临江小院. We ordered many amazing food like 小龙虾and for the first time tried raw crab claws.

All in all, it was a very productive week, where I feel like I’ve learnt a lot from the different projects. From leap motion implementation to thinking up of ways to make a robot more alive. Looking forward to the upcoming 3 days break next week as Friday is 端午节.