On the 7th of August, Sunday, we went to visit the Flea market at Mauerpark. The flea market is slightly different from the ones at other places. Street food vendors along the streets with a variety of cuisines from over the world. There were cuisines from Asian cultures such as Korean rice cakes and Japanese Takoyakis. More importantly for us, we went straight for European cuisines which were rare to find back in Singapore. We bought a Lotus crepe and Cannoli. It was delicious and the owner of the store was generous in providing free samples. Apart from the food at Mauerpark, there were also stores for antiques, clothing & handmade crafts. Similar to most of the other thrift shops, items were mostly boxed or displayed on trays. They can make payment through the staff in charge of the section. House decors such as paintings or pots, vintage clothing, books, cooking ware, stamps and more were available. On the 8th and 9th of August, most of us were busy working on the Term 2 projects. Singaporean students were split into 3 groups namely Start Up Crash Course, CanSat Satellite Design and Gaming for Virtual and Augmented Reality.

Firstly, the Start-Up Crash Course. Students who pick this course for their Term 2 actually produced amazing results in their final pitch. Throughout the 4 weeks, the students had to brainstorm and come up with different ideas to sell. They were also provided coaching and assistance to perfect their pitch.

Secondly, the CanSat Satellite Design. Students learnt how to launch a rocket super high up into the air, collect some data and retrieve it when it lands safely back to the ground.

At the end of the course, the students managed to build a prototype, launched that prototype 100 meters up into the air, recorded some data and last but not least, achieved a safe landing with their prototype. Gaming for Virtual and Augmented Reality

Lastly, the Gaming for Virtual and Augmented Reality. For this course, students had to form groups and create games. Students had the option to pick either VR or AR for their game. There were a total of four groups with their games titled: Escape Room VR, Food Cop, Flight Simulator and Seagull Stimulator.

Escape Room VR, a game where the creators decided to use thrill elements to make players solve mysteries and puzzles while escaping with their lives.

In Food Cop, the objective of the game is to sneak food past security guards. There were multiple stages and each stage completion increases the difficulty level. Flight stimulator is a unique VR game where players have to perform a series of exercises in order to fly their plane properly. The creators designed it to motivate users to exercise in the comfort of their own homes.

And last but not least, the seagull stimulator. The objective of the game is simple, to bring as much chaos as possible. The players can land poops onto human targets or dive down and strike on the foreheads of innocent suckers. Overall, we experienced a lot of motion sickness from all the programming, testing and troubleshooting. We also had lots of fun when a breakthrough happens and the game works the way you want it to.

Apart from studies, we also had some cultural programs organized by TU Berlin, such as the visit to the Futurium Museum (or Future Museum). This museum showcases a wide variety of technology regarding climate, housing, food that are essential for survival in the future. Moreover, it also offers interactable stations or areas for hands-on learning and experience.

A mini robot, located near the entrance, was detecting and gazing towards the direction of any visitor near it. This robot then instructed visitors to take a piece of wristband which has an NFC tag where visitors can tap on exhibits that they enjoy and save it to the wristband, almost like a mini journey diary. At the top section of the museum, visitors can deposit this wristbands into a machine that reads all the previous taps and displays the type or character you are. 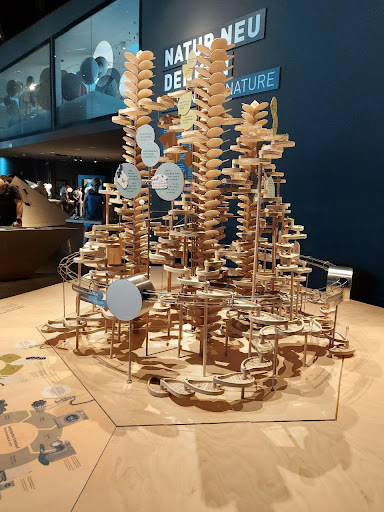