This week will be dedicated to Alibaba Business Design. I’m thankful that my project theme’s Prof was the one who organised this programme ‘Alibaba Business Design’ as part of the ‘Asia Campus Design’ between ZJU, Chiba University, and Yonsei University. It’s a tri-university partnership of 3 different asian countries (China, Japan, and Korea, respectively). Because our prof organised it, we were automatically enrolled into this programme (as her recommended course for us) without having to compete for the remaining 8 places with about 40+ other ALP students (which unsurprisingly, was gone in a matter of seconds). Moreover, my alp project theme team members was allowed to choose the theme of the project of our liking from the 4 themes available: Fresh foods of supermarket, Luxury Retail, Logistics, Live performances; even before the remaining 8 slots was opened for the other ALP students, and even then they were just randomly assigned to different themes. Coming for Alibaba Business Design Course, I was looking forward to the social interaction with the students of different countries: the making of friends, the exchange and understanding of different ideas and cultures, the different perspectives from which the students look at a problem – all these opportunities to learn from one another, they excite me.

On the 1st day of the course, we attended a short lecture by Professor Wakanabe from Chiba University about Service Design in Businesses, something which I believe is uniquely Japan and is what they do best. After meeting in our groups, we went for a visit of Alibaba 西溪 xixi Campus, where the Alibaba headquarters are, and the new Alibaba brick-and-mortar mall (亲橙里 or More Mall) which houses physical stores, or what the Chinese call it as 线下商店 which translates literally to ‘offline shops’. We were given tours at their 盒马 Hema Supermarket, known for the convenience and their promise of fresh food delivery (which is also what I worked on with my Alibaba Business Design team); and at their luxury retail shops which feature the ‘virtual dressing room’ where you can better visualise yourself with clothings and accessories from the luxury retail shops through their machine. We were also given a brief introduction of the technical aspects that goes behind these physical stores, which includes the kind of data collected at these stores and how they can better use it for their own purposes. After which, we were given a tour of Alibaba Headquarters itself, where we saw the 淘宝 taobao building, and the Alibaba store in which they were testing out the unmanned supermarket concept much like Amazon Go, the unmanned grocery store. They boasted about their capabilities of being able to attain about 80-90% of Amazon Go’s operations.

Throughout the entire week, my team and I worked on an idea to improve the display of the freshness of produce sold in the Hema Supermarket. After multiple rounds of back and forth, of going through multiple ideas, we finally decided to use live broadcasting as a manner through which we can better present the freshness of produce sold, and to colour-tag each produce so that users can choose which produce they want to purchase. On the tag, there is also QR code containing various vital information of the fish, which users can scan upon receiving their package (Hema is a supermarket that works on the concept of fresh food delivery instead of having to physically be at the store). All in all, this idea was really well-received by the Alibaba designers, and there were many takeaways from working with a team of people from different countries. Such an experience is only a foreshadowing of what is to come in the future after graduation. Other than the other Singaporean team-mate, others are all Masters students who study design and arts-related courses. As for us, we were one of the only engineering students there. The need to consider the feasibility of the solution from multiple viewpoints is essential, and while we tried to be as holistic as possible, it is a business design course after all, and more emphasis would be placed on the design and business aspect of the solution. Ours might just be a suggestion of improvement to their already existing technology, but the selling point is that it can be quickly implemented, without technological barriers. While at the supermarket, we observed that fresh produce, especially fishes, already have tags on them and thus Hema would merely only need to change its design. A small change like this would not only improve customers’ trust, but also improve the transparency of the process from the buying to the receiving of the package. 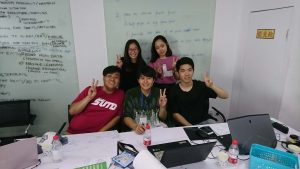