So it’s week 10 and it’s our recess week!!!!!! A lot of people has went on traveling around China, and a few of us has decided to participate in the Traditional Pottery Experience organized by IDI. This is a 5 day 4 night program and is only 500 yuan aft school subsidize for us!!! Just super worth right from the cost. Anyway, for this trip we travel to Jingdezhen (景德鎮), which is a town of pottery ever since Han dynasty (that’s like 1000+ years ago!) and well it’s a 6 hour bus ride from school. 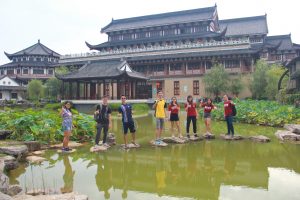 On the first day, we reached there at 2pm and finally get to our room to settle down. The room is pretty damn nice given what we paid for, big and clean, and it was said that the others (there’s a summer camp group of students) there need to book one year ahead just to live at that place! Back to the topic, we soon started our exploration of pottery after we settled down nicely. So first, we visited 皇窯景區 which is a 5A scenic place just beside our hotel. It’s a collaboration of museum and factory which demonstrate the development of pottery making from Han dynasty till nowadays, and aside from being attraction spot, all the shifu inside also make pottery items on a daily basis for sale outside the museum itself. After a quick walk through of steps to make a ceramic product and history of pottery, it’s soon the most exciing hands-on time~ To start off, a young shifu came 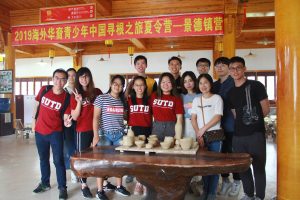 and show us some basic skills to make shape and make bowl—our task this time. The clay just looks so soft and easy to be mold in his hands that we thought it is of not much difficulty until we actually started making it ourselves…the clay either just fly away, break away half-way through, or simply get too wet and can no longer be mold…anyway none of us actually succeeded after the 1hr plus of struggle. As everyone is getting demoralized and tired, the prof brought us out to see some other instruments in the garden that’s used to make the mineral stone into clay we use for ceramic plate. The mechanism of the water mill itself is pretty simple yet cool, sadly the efficiency is way too low that It would take a good 10 months just to fully knock all the mineral stones into fine-enough powder to be made into clay. It’s soon dinner time and we had a pretty decent meal in the hotel itself. It’s really a very chill trip that after dinner ended at 8-ish, it’s our free time already, and cause it’s really pretty early, some of us decided to play card game till 12 before getting back to sleep. 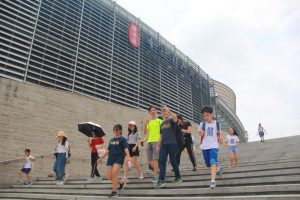 On the second day, we woke up and had a rather early breakfast for a normal SUTD student and set off to ceramic museum at 9am. The structure of the museum itself is quite interesting but umm it’s not the main focus for the trip, so anyway the museum display a lot of 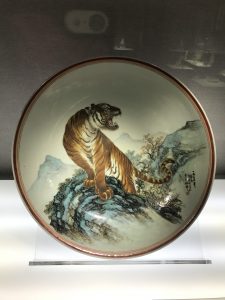 ceramic works from ancient time, and introduce how Jingdezhen become a ceramic/pottery town and stay throughout the time. Some are pretty and some are funny-looking, though not as detailed and mesmerizing as modern day worls, but still pretty impressive given the technology at that time. It was near 12 when we finished walking through the whole museum and we moved on to have lunch at 世外陶源 which is another pretty decent meal. But the food here is generally more spicy, so a bit painful for those who can’t bare with spicy food. Continue walking around that region was some art gallery and small museum all of ceramic work. Some interesting thing is that they even use smashed ceramic plates/bowls as part of the floor decoration! There’s not much plan for the day that we were set freeafter reaching back hotel at 3pm. So 7 of us decided to continue practice our pottery-making skill. It’s slightly better than the previous day that most of us manage to make something that looks decently nice from the 2hr of practice. 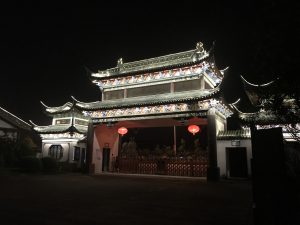 We made bowl, cup, vase, and plates all the way till dinner time. After dinnering at the same place in the hotel, the prof brought us to a small hall and showed us some interesting pottery-making videos before letting us go at 8pm. And the night continued similar to the previous day.

On the third day, personally feel like if the most fun day out of this 5 day trip, we first went to a market called 陶瓷文化懬場 (Ceramic cultural square) which is only opened on Saturday morning. There’s a lot of stalls there selling various kind of ceramic products. 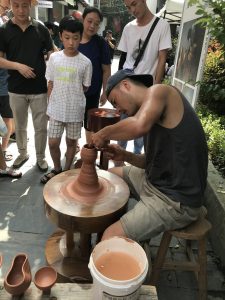 From utensils to accessories, some are more traditional design whereas others are combined with modern design, partly due to a good mixture of university graduates/undergraduates and all the shifu. We also visited a few ceramic studio and kiln nearby. Most of us bought quite a lot of stuff there, apart from the nice quality and design, it’s also cheap, and supposedly the cheapest as compared to anywhere else. In the afternoon we visited another place called 陶溪川 which used to be a big factory site for ceramic and now renovated into market place, so it looks like a pretty outlet just that all the things sold inside and quite expensive (also quite on point though) and are all ceramic works. Visited 2 museums there and saw some interesting artwork and also nice photographing place as well. And is dinner time!!!! The dinner this night was damn on point, though 80% of the dishes are spicy but they are all pretty damn good, there’s fish head, pecking duck, bamboo dumpling, steamed pumpkin, pork rib with glutinous rice, tiny cucumber, …etc, so many dishes cause we sit in a 18-people round table and the middle part is set to be auto spin! Anyway this is a damn satisfying dinner that all of us are just so full from it. After dinner, we moved back to 陶溪川 for the night market that’s only opened on Saturday night. The night view of 陶溪川 is very pretty, have more European vibe if just looking at the buildings itself. The market is pretty big as well, but sadly not 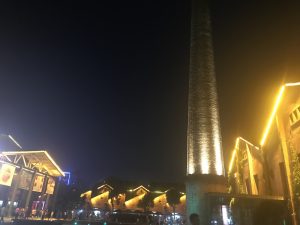 as good as the one in the morning. Though the amount of good is much more, but the variety of things they sell is a lot less. It is only later that the prof told us that this place has a lower standard/requirement for owning a stall, whereas for the morning one, each need to went through multiple judges in order to have a place, that’s what result in the difference in terms of quality of good sold there. Despite that, there’s still stalls selling interesting and cute designs, so the trip in neither bad. Enjoy the day pretty much except for the weather…as summer is coming, China is getting more hot and stuffy. 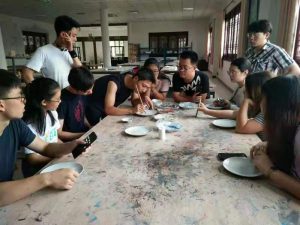 The forth day we did nothing but spend the entire day painting ceramic plates and making models with the clay. Painting is hard but fun, it is pretty nice to see all different style of paintings coming out from everyone and it just looks pretty great when put together. The model making is hard though…seems to be some easy job but ended up being harder than painting plates in some sense…only after we started making that we noticed how hard it is to keep the moisture and thickness of the clay right to make it into shape we want it to be like. 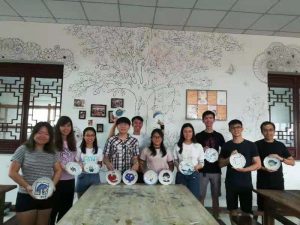 So then it is till 5 that we ended the task amd went to play around with feeding fish in that huge pond. This is pretty much the end of the day. But for the last dinner in Jingdezhen, the profs ordered 小龍蝦 (tiny lobster) for us which is pretty cool (like I said previously, this trip is god damn worth)! More dishes are provided, though nice but I really miss meat…not sure of why but people here don’t seem to eat a lot of big-piece meat @@ just siao sad… After dinner, we decided to go for karaoke, and the karaoke here is so cheap as compared to back to school!!! It’s really just very fun amd we all enjoyed it a lot. 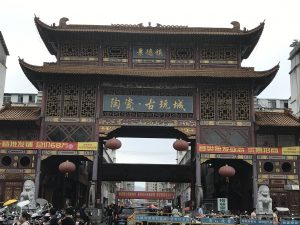 It’s the last day of this trip and before we head back to school, we visited the last place for the trip — 鬼市 (Ghost Market), it has this weird name cause this market only open once a week starting from 2am to 11am. In the past, there’s no light, and at 2am which is completely dark, people rely on candle and lanterns which gives this slightly creepy feel at night. As this market is mostly selling antique stiff, it was set to be at night such that people can’t identify clearly what they have bought, just some really interesting back-story. Anyway the place is crowded and basically like a wet market but antique stuff. And there’s even one stall that’s selling tomb stone! Just so weird… After walking around quickly, we went on for another 6 hour trip back to school.

After all, this trip may not be the best, but definitely a memorable one in the DATE program!