Hi, I’m Zai Xuan. I lost track of how many weeks I’d been here and thought it was Week 7 at the time of posting this. It’s Week 8, my post is late, that’s not great, sorry for the wait. Anyway

Let’s quickly get the school things out of the way. This week (or rather, last week), we attended our second Design Fiction class. This class challenged us to make short sketched-based videos around the theme of ‘making toast’. My group discovered a quick way to make toast, and I’d like to share it with you.

Overall, it was a fun to both make the video and watch the hilarious creations of the other groups.

Hangzhou is known for its major attractions like Xihu, the Xixi Wetland Park, Leifeng Pagoda and so on. These are all great spots to visit and experience. Dig deeper though, and you can find some really interesting hidden places in Hangzhou, some that most locals might not even know about.

My TAs introduced me to this place after I asked if there were any record stores in Hangzhou. The address led me to an ulu building in the middle of an industrial part of Hangzhou. Almost immediately after I stepped into the building, I stepped outside and checked my GPS because it looked like the least likely place to find a record store. It was a very quiet building, mostly filled with store rooms, and had escalators that didn’t work. A lone security guard sat at one corner minding his own business. I climbed up the escalator and began my search for the record store.

I kept walking around each floor while checking my location, and I always seemed to pass it, but I never saw it. Of course, it could be on another floor. But 4 floors through, I was starting to ask myself if I had really came to the right place; if there was even a record store in the building to begin with. Maybe the map address was outdated?

Then I climbed the escalator up to the 5th floor, and there it was. 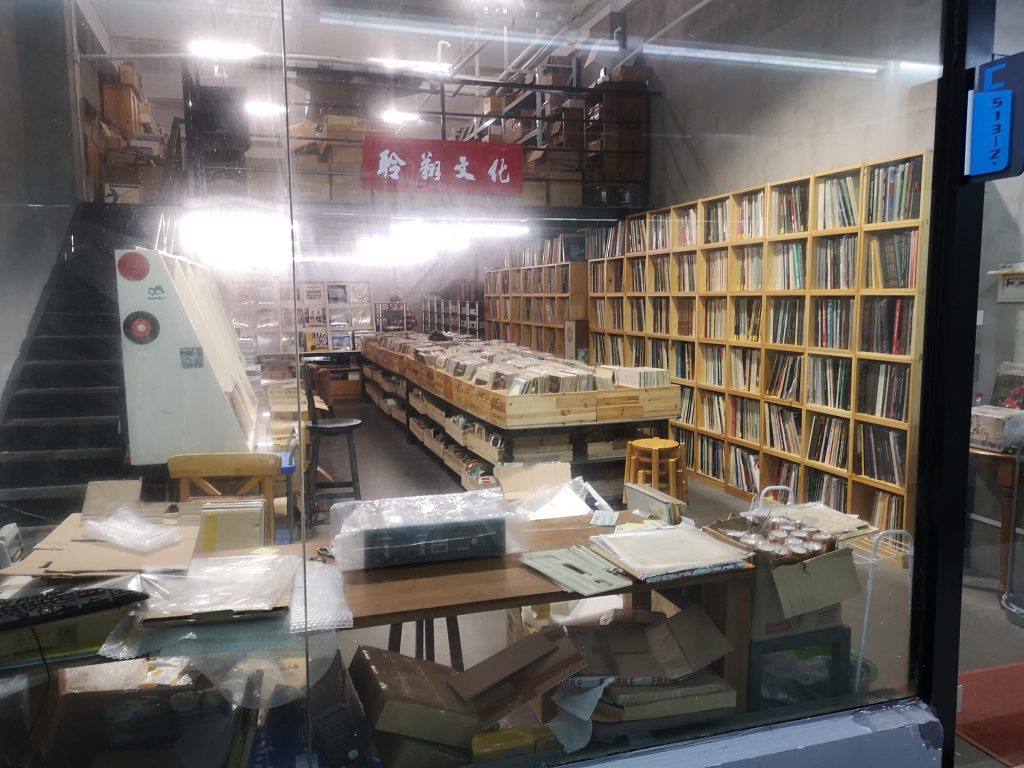 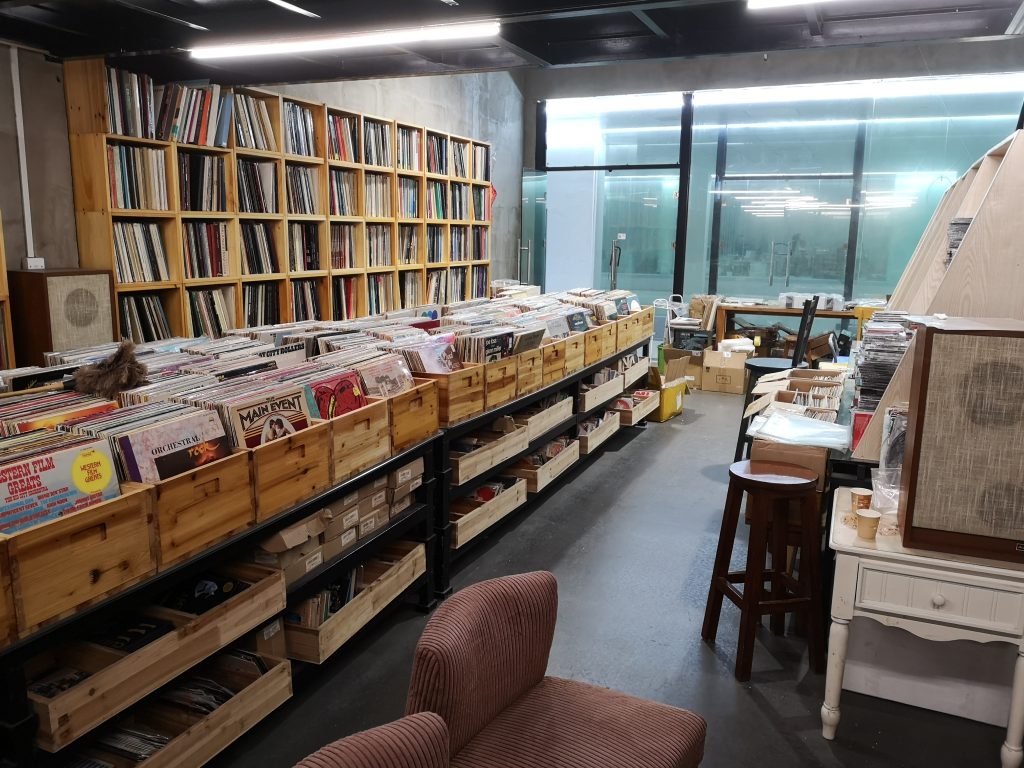 So glad I didn’t give up halfway. There on the 5th floor was the record store. And it had a LOT of records. Mostly classical and Japanese. It was dimly lit, smelled like an old cupboard, and the records were dusty. Perfect.

I browsed around for a bit while listening to a Japanese Teresa Teng CD that the store owner was playing. They had a huge collection of old 12″ and 7″ records, and the occasional 10″ one, as well as CDs and casettes. I was looking for house/techno/electronic records and eventually found quite a lot. The owner was gracious enough to let me play the records before deciding what to buy, and I happily did so for the next 2 hours.

I eventually picked a few old house records and some liquid drum and bass records from his collection. 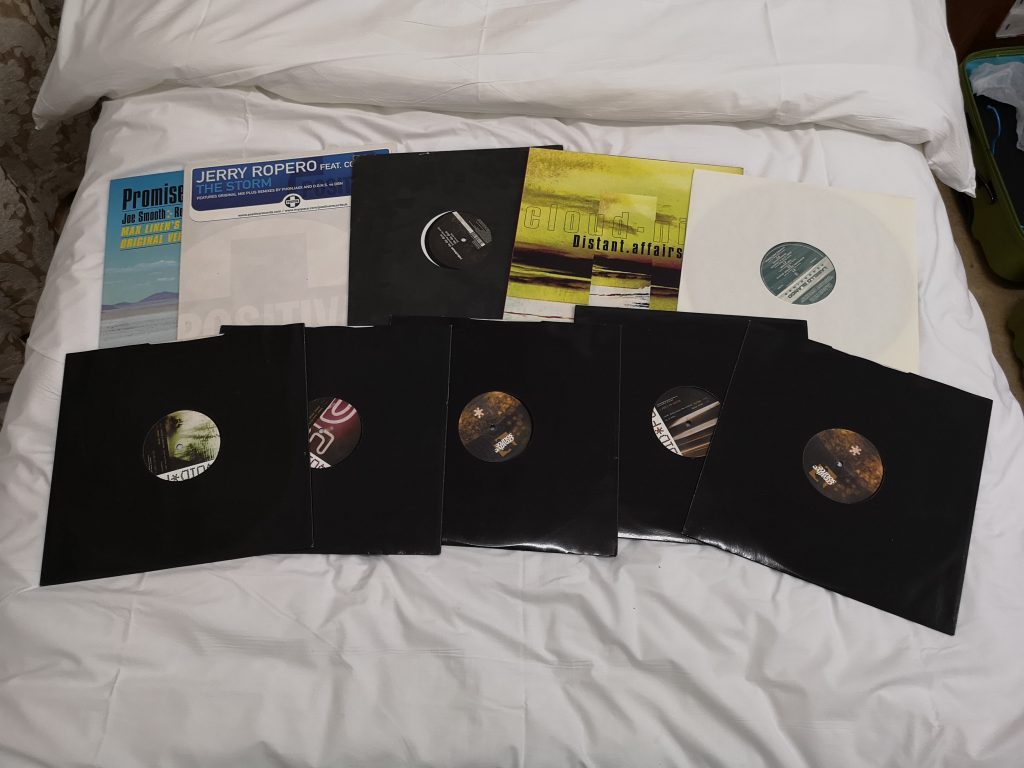 The records were 20RMB a pop on average which is SO CHEAP. The owner even gave me a nice tote bag to carry them with! I can’t wait to spin them when I get back to Singapore.

At night, Hangzhou is mostly quiet. But hidden underground and in several buildings, lies the throbbing heart of Hangzhou’s nightlife. A stay in Hangzhou wouldn’t be complete without a trip to the bars and clubs of the city. Here are 2 of them.

It’s a bar that’s, well, in a basement. This bar is truly underground both geographically and musically. The pub’s DJs spin House and Techno regularly, and also Trap and Hip-Hop. Sometimes you’ll see people vibing on the small dancefloor. It’s a groovy, intimate venue well worth a visit.

Crazily enough Jimmy let me spin!! These are snippets from a set I did last night featuring a couple of interesting guests.

So that’s Basement, which is kind of like a bar with a small dancefloor, but what if you wanted to go to a big club? Hangzhou’s got you covered too.

Where do you go if you want to get all crunk till the sun rise? You go to somewhere like this.

OK honestly I’m not a big fan of clubs and haven’t been to many in Singapore so I can’t say for sure how this one stacks up against those in Singapore but it was pretty impressive. The atmosphere was crazy and the lights were sick. Also they had a BOUNCY dancefloor like what?? It was absolutely packed and I only managed to get onto the edge of it and I was jumping while holding on to the stage for dear life. It was a mad experience. That’s probably the lamest review of a club ever.

But I’ll stick to small pubs like Basement. The music’s funkier, you also get to be closer to the DJ (even join them on stage if you like), and also chat with the DJ and staff. It’s a nicer vibe, I feel.

Alright that’s all from me for now. kthxbai