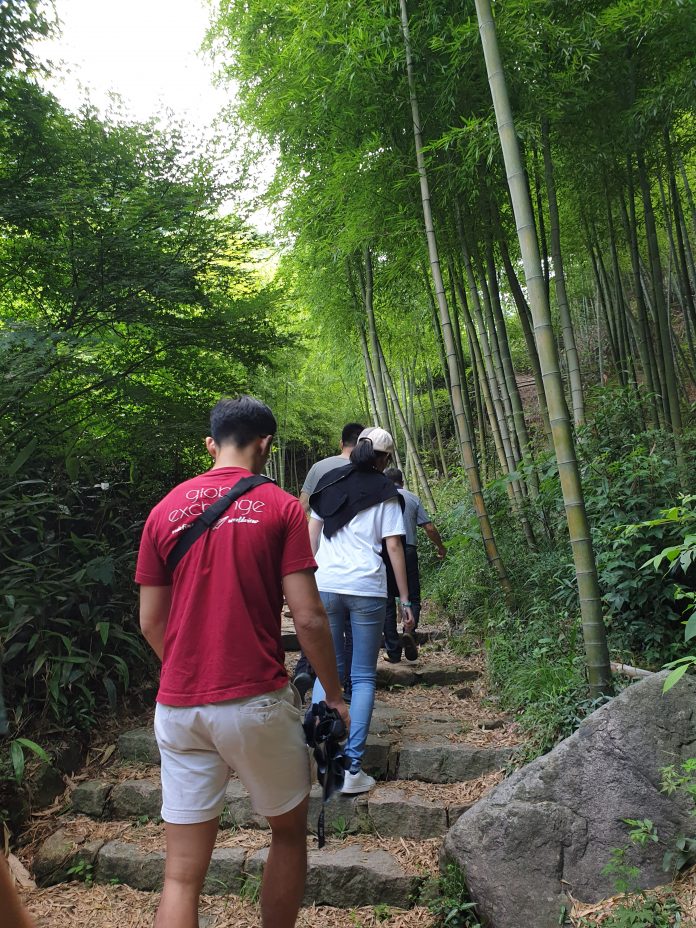 The big day has arrived! It was time to finally showcase all of our origami robots. Now mounted onto a stand and equipped with a beautiful backdrop, each robot has its own theme. The themes range from Chinese history (Dragon exhibit) to the more cartoon related ones (Elephant exhibit and Perry the platypus exhibit). For example, the Chinese history exhibit’s robot was a dragon that was mounted onto a “stone” platform. Its job was to guard the ancient treasures from theives. To engage the audience, many of the sensors were attached to the treasures. When taken out, the sensors would trigger the dragon to be angry and irritated.

Our group’s robot was called Xiao Seal Kun, meant to mimic a lonely seal finding a companion to play with. The seal contains movements such as running, shocked and fighting that will react under different circumstances. If the user touches or kicks it, it will flinch and be startled. Moreover, if the user is far away, the seal will be constantly searching for a companion to interact with. Xiao Seal Kun also resides in the North Pole were polar bear rivals are abundant. Not only will Seal Kun have put up a fight once in awhile, it would also need to keep itself occupied during its free time by dancing!

It was indeed a pleasant experience as all the hard work everyone put in had paid off. Not only was everyone proud of their exhibits, the professors and students within ZJU were also impressed with the innovative design of each project. Each group had to present to professor Jiang on the uniqueness of their project. In addition, we had to show how the robot fulfilled the requirements of engaging the audience via interactions. What a day to cap off an awesome project!

Bamboo weaving is always a big part of Chinese culture. Over the weekend, we got to experience first hand how to weave our own bamboo products! We left ZJU campus on Friday for BaiZhang where we met Master Zhou, a renowned bamboo master in the area. With a career spanning more than 40 years, Master Zhou has not only mastered the trade,  but also traveled to numeral institutes to spread the art of bamboo weaving.

He brought us up the mountain to scout for suitable bamboo trees that can be used for our weaving during the next few days. During the trip, he also said that bamboo trees that are too mature or too young can’t be used, hence it took him quite awhile to find the perfect trees. With a few skillful and strong cuts around the base of the tree, Master Zhou was able to fell 4 bamboo trees in just a short period of time.

Even though the trees were heavy, Master Zhou still managed to carry the trees and transport them back to his home even though he is already 60 years old! His wife cooked for us extremely delicious lunch and dinner, including her famous dish, locally made Dong Bo Rou. At his basement workshop, he demonstrated to us how to obtain bamboo strips from a fresh, raw bamboo tree. The tree had to be quartered, it will then be further halved until there are 8 pieces. Next, the bamboo would be striped of any sharp and protruding edges. After that, each strip of bamboo will be sliced into 8 thin layers which will be the strips that we will be using to weave!

The next day, he taught us how to weave a simple basket. Firstly, we had to align the sticks horizontally and vertically to form grids. Secondly, with the help of water, the grids will be bent to form the corners of the basket. Thirdly, a rim will be weaved on the top of the basket to cover any protruding edges. Lastly, a handle can be added to complete the masterpiece!

Besides bamboo crafts, Master Zhou also gave a tour around the nearby village. The village was also home to many bamboo masters and crafts (such as cloth knitting). Lucky for us, during our visit, there was a free market where the locals showcased their own hand-made products. Not only was there to eat and shop, there was also great scenery nearby. Just beside the village is a garden that had bloomed flowers. The flowers (orange, white and purple in colour) blended well with the mountains in the background. Coincidentally, the local community had a music festival at night too. The festival had “ShiFus” to perform the traditional dances and also younger musicians who played traditional musical instruments like the PiPa.

It was time to say goodbye to Master Zhou and his wife. As much as we were all reluctant to leave, we were very happy to take home with us our own hand-weaved baskets as souvenirs!