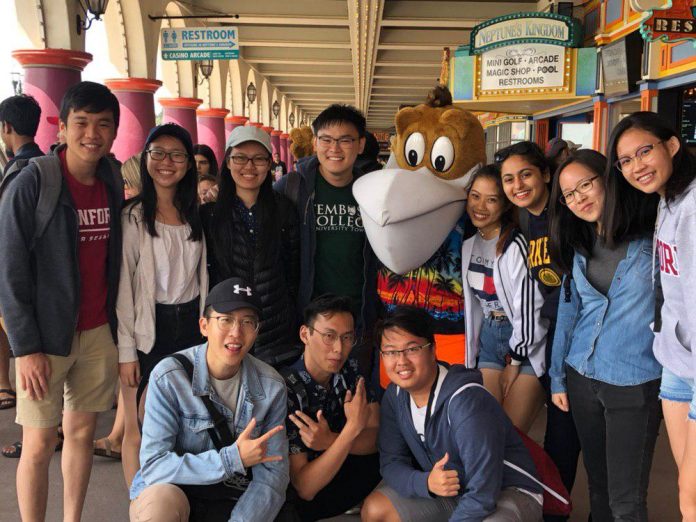 Hi everyone! It’s Group 3 again. Time in Stanford seems to fly by so quickly. It is our 5/8 week in Stanford and it is the week of the midterm exams for many of us. Much of the week was spent preparing for our respective examinations which mostly ended by the Thursday of this week. This gave us a long weekend to go out and play again!

On Saturday, we attended another one of the school organized trips to Santa Cruz. Santa Cruz Beach Boardwalk is a colourful seaside amusement park which is a hundred years old. This amusement park was a different experience as compared other theme parks such as Universal Studios Singapore as it has a carnival-style structure and is built right next to a beach.

There is truly something for everyone at Santa Cruz. There were not only roller coasters and other thrilling rides, but there was also carnival games, laser tag, arcades, and food! They even had a pirate-themed mini-golf course in the park which was a lot of fun for us, especially because it was the first time playing mini-golf for most of us.

The next day, some of us even went on a day trip to Yosemite National Park, organised by the Gerhard Casper Quad hall. We had to gather bright and early at 6.30am for breakfast before heading off as Yosemite is actually quite far from Stanford University (more than 4h drive). By the time we reached there, it was already noon and we had less than 6h to explore the vast sceneries of the park.

The highlight of the day was undeniably the Yosemite Falls. Even though there are signs advocating against climbing the rocks to get closer to the waterfall, it is a common practice scale the rocks to get a closer view of the waterfall. It felt especially rewarding and refreshing after a tiring hike to get to that point.

As my hiking group was rather tired, we headed back to the meeting point early to get some rest before the bus drives us back to Stanford again. My favourite part about long drives in the US are the views we get on the road. The roads here are really different from Singapore in the sense that, save for the fact we drive on the opposite side, the drive can be quite scenic and enjoyable.

The first five weeks in Stanford has been a fulfilling and enriching experience. Every day I feel quite lucky to be granted this opportunity to study abroad at one of the top universities in the world, even if it is just for the summer. With less than half of the summer left, I plan to cherish the remaining time here and to make the best out of it. Carpe diem.