Today is the day we celebrate Children’s Day with the primary school children. A correction I have to make for the past few posts is that the actual Children’s Day itself in Thailand falls on 11 of January, which is tomorrow where the children gets to enjoy their holiday. Well, this is the day we have been looking forward to the most, being able to take it free and easy and have fun with both children and our KMUTT counterparts.

We started on preparations the moment we arrived at the primary school, by setting up the venue and doing trial runs of different games. There are five different games in total to play with the children – musical chairs, three-legged run and water race with the Primary 1 to 3 students; extreme eating (sounds daunting) and running tic-tac-toe with the Primary 4 to 6 students. Some of the preparations include pasting markings on the ground for the tic-tac-toe game, getting water and cups ready for the water race and blowing up balloons to put around the venue for decoration. 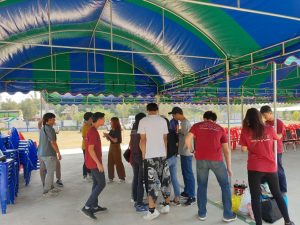 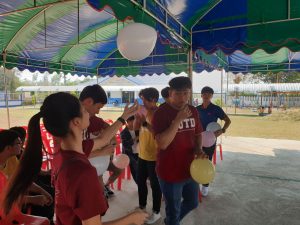 One thing you might have noticed is that we SUTD students are all wearing the same red SUTD shirt, which was given to us the night before as the official FACT shirt!

At 1pm, the activities with the primary school students started. I joined the Primary 1 to 3 group, where we were divided into 5 different groups to compete with each other in the three aforementioned games, to win the ultimate prize – a necklace of sweets for each winner.

The first game was musical chairs, where each group would send 2 individuals up for each game. It’s embarrassing to say this but I was kicked out in the first round I played, though my teammate eventually lasted to the end and won the game! 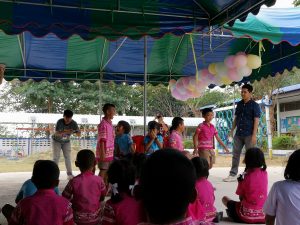 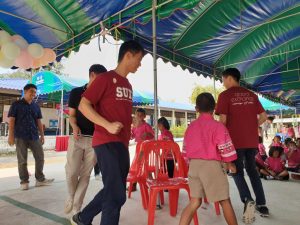 Second game: three-legged race, where every two people from each group would tie their legs together, having to race with other teams as a three-legged entity. The game ends when all the pairs in the group complete the race. Given that the children has pretty much boundless energy, I was worried that they may be too competitive and fall down – however they were rather coordinated and even came up with different strategies that I could not even think of myself! 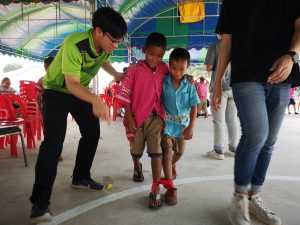 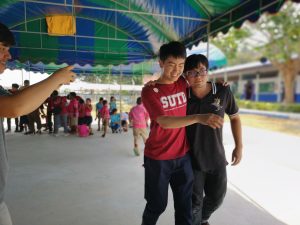 Last game for me, also perhaps the most exhausting yet intense one, was the water race. We are to take turns carry plastic cups of water to a bucket on the other side and fill it. The group that fills the bucket to the brim first is the winner. The catch? – there were three small holes at the bottom of the cup. It was rather stressful to get to the other side as quickly as possible before the water in the cup completely drains. Though I am proud to say that our team was the quickest and won the race.

In the end, my team won the most number of games, and as such got the prize! I was so proud of our kids, as they lined up to receive their necklace of sweets. I had a lot of fun time interacting with the kids, as they were so friendly and funny at the same time.

I should not forget to mention the games others played with the Primary 4 to 6 kids. Although I did not participate, from what I saw from the sidelines, the Tic-Tac-Toe race was a pretty intense game, as students duke it out in Tic-Tac-Toe by running to put their respective cross or circle, and changing their positions so that they can have a three in a row. 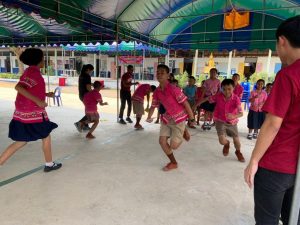 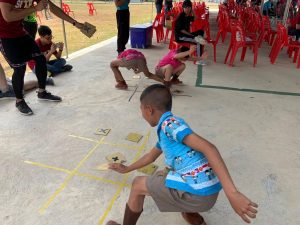 Another game was extreme eating, where students and children would race each other to finish food on the chair as fast as possible. It was really funny watching kids stuffing their faces full of cake, or flour being splashed on both their and our friends’ faces! 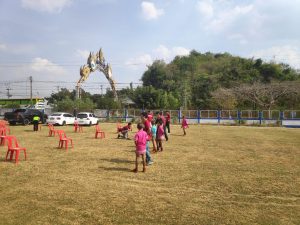 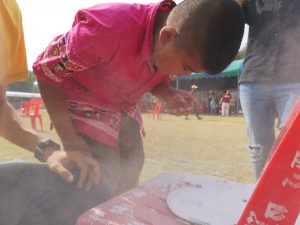 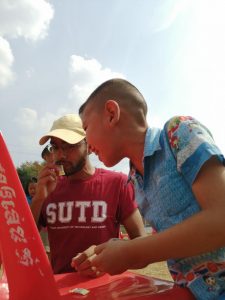 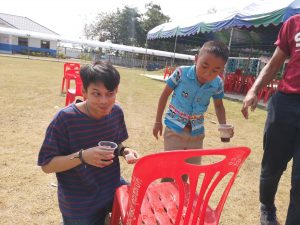 In the end, when the games ended, I was tired and somewhat hungry, but content that we all had a great time. It was time for us to go back to KMUTT campus, and we waved goodbye to the primary school kids and gave them our best wishes.

After chilling in the hostel for a while, we went out with KMUTT students for hotpot. The food was great, especially since my table ordered a lot of meat! Not to mention both Max and Wei Lek, both faculty members from SUTD, treated us all to beer. Overall, it was a great dinner and fitting one for our last dinner in Thailand. 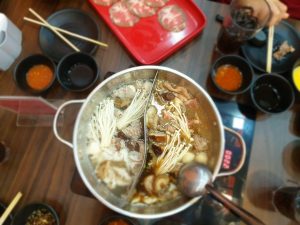 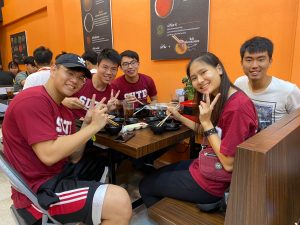